What Is Retinitis Pigmentosa?

Retinitis pigmentosa (RP) is the most common of a large group of progressive retinal degenerations or dystrophies [i.e., degenerative disorders].

There is considerable overlap among the various types. It usually refers to a group of hereditary conditions involving one or several layers of the retina, causing progressive degeneration.

Some Facts about the Retina

The retina is the light-sensitive tissue that lines the inside surface of the eye.

The retina contains photoreceptor cells that convert (or process) incoming light into electrical impulses. These electrical impulses are carried by the optic nerve (which resembles your television cable) to the brain, which finally interprets them as visual images.

There are two types of photoreceptors: rods and cones, which are the light-processing cells responsible for peripheral (side) and central (straight-ahead) vision.

In most retinitis pigmentosa (RP) and RP-like diseases, it is the rods that deteriorate first, followed by the cones, although there may also be some involvement of the cones.

With RP, central vision is usually retained until late in the disease as the peripheral retina slowly constricts.

Retinitis pigmentosa is primarily an inherited condition that involves both eyes and is generally diagnosed later in life. If it starts in one eye, the other eye usually develops the same condition in a number of years.

If you have been diagnosed with retinitis pigmentosa, it is essential that you undergo genetic testing of your family history and family tree (called a “genetic pedigree”) with the aid of a genetic counselor. Usually this is managed by a retinal specialist, who may also enlist the help of “super-specialists.” A super-specialist is a physician who has had additional, highly specific training in a specialty area of medicine. 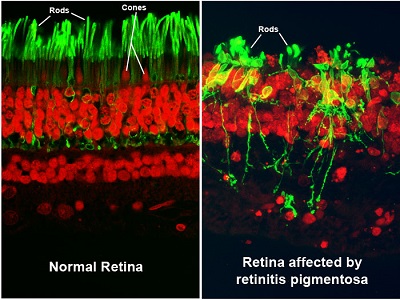 What Are Symptoms and Signs of Retinitis Pigmentosa?

Since retinitis pigmentosa is a rod dystrophy, starting in the periphery of the visual field, you will start to notice an increasing difficulty in night vision, with progressive constriction, or closing in, of the visual field [i.e., the total area an individual can see without moving the eyes from side to side] to 20 degrees or less in the better-seeing eye (“tunnel vision”).

Rarely, total blindness may eventually occur. In some younger patients, in addition to the visual findings, poor hearing or deafness may occur. Fortunately, significant visual loss may not occur until later in life.

Portions of this article were published originally at www.medicinenet.com/retinitis_pigmentosa/article.htm