What Is a Stroke?

What Happens During a Stroke?

If the ischemia is prolonged or severe, the involved tissue may become infarcted, meaning that some of the tissue has died. Injury from infarction is not reversible, and any damage from infarcted tissue is permanent.

Based on the function provided by the area of the brain involved in a stroke (muscle movement, speech, sense of touch, or sight), a stroke can result in loss of certain normal functions:

Strokes can affect vision in a number of ways, including decreased vision and double vision:

A stroke can also cause problems with the higher order processing of visual input, including neglect, agnosia, agraphia, or alexia. The term “higher-order processing” refers to the strategies required for judgment, decision-making, reasoning, problem-solving, and processing complex information:

Master Sgt. Jeffrey Mittman was wounded by a roadside bomb on July 7, 2005 in Baghdad, Iraq. In that attack, along with suffering a traumatic brain injury, his left eye was destroyed, his right arm was badly damaged, and he lost his nose, his lips, and most of his teeth.

“My first concern was how I was going to recover and take care of my family,” he said, since he could no longer lead soldiers in combat. Read about Sgt. Mittman’s long and arduous journey through healing, vision rehabilitation services, and employment.

Jeff adds, “When I decide to go for something, I go! What’s the alternative? You have to be proactive. I set objectives, but the main challenge is to select options for meeting them. There’s a solution to almost everything – you just have to find it.”

How Does a Stroke Decrease Vision?

An understanding of the visual pathways can help clarify how a stroke can affect vision.

After the optic nerve exits the eyeball from the back of each eye, it travels a short distance before the nasal fibers (the optic nerve fibers on the side of the eye closer to the nose) from each eye cross over to the opposite side (make an “X”) as they continue traveling toward the brain. Here is what happens in the eye and brain when we look at an object: 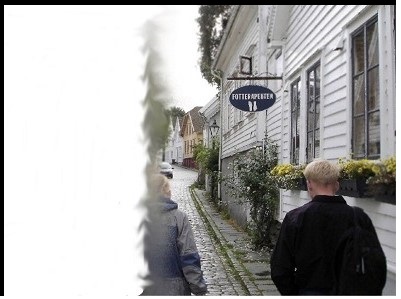 An example of an injury to the right side of the brain, causing
loss, or unawareness, of the left visual field. Source:
Henry Ford Center for Vision Rehabilitation and Research

Depending on precisely where in the brain these strokes, lesions, or injuries occur, the effect can involve a smaller or larger area of the visual field and can affect either central (or straight-ahead) vision, peripheral (or side) vision, or both. Multiple strokes or lesions can cause multiple patterns of visual field loss.

How Are the Visual Effects of a Stroke Treated?

Any person with signs or symptoms of a stroke, including loss of visual field, new double vision, weakness of one or more muscles, difficulty speaking, difficulty walking, or other neurological symptoms, should immediately seek care through rescue services or a local emergency department. Early treatment of strokes has been shown to dramatically reduce the severity of the stroke and to improve survival rates.

In the emergency room, the patient will undergo imaging to identify the type of stroke (ischemic or hemorrhagic) and the area(s) of the brain involved, as well as blood tests and other studies to identify any risk factors for stroke.

A patient with an ischemic stroke who is identified soon enough after symptom onset, and who is safe to undergo the procedure, may receive thrombolytic therapy, in which a medication is administered that helps dissolve the blood clot that caused the stroke.

Patients may also be treated with aspirin or blood-thinners. Other medications or interventions may be administered, based on the underlying cause or risk factors identified for the stroke.

Do the Visual Effects From a Stroke Improve Over Time?

In the long term, in some cases, visual field defects from stroke may improve, although there are often permanent deficits. After a stroke, the patient should undergo formal visual field testing by an eye doctor or neurologist to identify precisely the part of the visual field that has been affected. This allows documentation of the deficit and provides a baseline for comparison, should the patient note a change or new visual field loss in the future.

While visual fields that have been lost permanently from stroke cannot be returned via any treatment, there are a variety of strategies that enable patients to adapt to their loss of visual field, and to make the most of the vision they do have: