An Introduction to Cataracts and Cataract Surgery

What Is a Cataract?

A cataract is a when the normally transparent lens inside the eye progressively becomes cloudy, yellow and hardens. Cataract is the leading cause of vision loss in the world. The World Health Organization (WHO) has estimated the cataract causes 51% of blindness in the world and has estimated that more than 20 million people are blind due to cataract. However, 90% of these cases of blindness from cataracts is found in developing countries. To talk about cataracts, it’s helpful to understand the parts of the eye, including the location and function of the lens, as shown in this diagram of the eye: The lens is composed of transparent, flexible tissue and is located directly behind the iris and the pupil. Like the lens in a camera, the lens in the eye helps to focus light and images onto the retina, which is the light-sensitive tissue that lines the inside surface of the eye. Nerve cells in the retina convert incoming light into electrical impulses. These electrical impulses are carried by the optic nerve (which is like a television cable) to the brain, which finally interprets them as visual images. At birth, the natural lens is clear and very flexible. The lens becomes more rounded to focus on near objects and thinner (or stretched) to focus on objects that are far away. Over time, however, a few changes begin to occur in the lens, usually after age 40:

How do cataracts affect everyday activities?

Cataracts cause an overall blurring of vision. People, objects, and colors look hazy, cloudy, and “washed out.” This lack of detail makes it difficult to tell time, read, watch television, see food on a plate, and walk safely indoors and outdoors. Surgery can usually be effective in removing cataracts. The National Eye Institute has provided the following photos:

Here is what a person with regular vision sees: 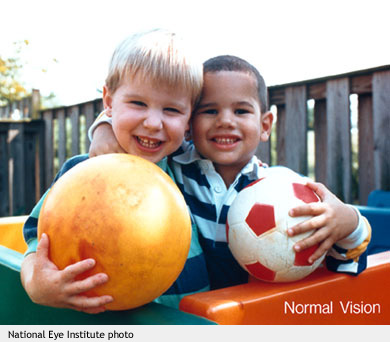 Here is what a person with cataracts sees: 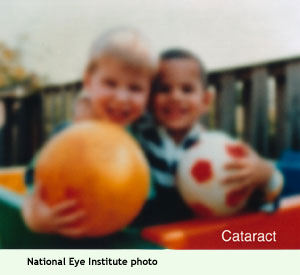 An Introduction to Cataracts and Cataract Surgery
Cataracts