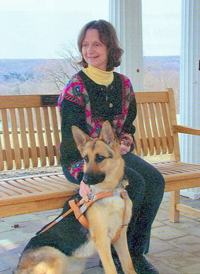 Sue Martin grew up in Birmingham, Alabama. She graduated from The University of the South in 1978 with a bachelor’s degree in English literature. Her passion for reading and digging into literature began in her youth and was fostered and refined during her undergraduate career. Sue lost her vision in 1982 and thus began her new career as an educator of blind and visually impaired individuals. Sue attended Western Michigan University in the mid-1980s, where she earned her master’s degree in the field of blind rehabilitation. For 11 years, she taught independent living skills to blind and visually impaired individuals in three different states. In 1996, Sue moved into the Computer Access Program of Maine Center for the Blind and Visually Impaired, now called The Iris Network. In her role as a computer access specialist, she did assessment, recommendation, and teaching of adaptive hardware and software. In 2002, Sue began her career with the United States Department of Veterans Affairs as the Subject Matter Expert for the computer access training section of the Southeastern Blind Rehabilitation Center in Birmingham, AL. In this position, Sue oversaw the teaching staff of the computer access program, provided technical support to staff and students, and made the selection of hardware and software issued by the program. Five years later, she moved into the VHA Section 508 Office. She is currently detailed to the newly formed Office of Organization Development and Engagement within the Veterans Affairs Office of Information and Technology. Sue has presented widely at international conferences on assistive technology. She works as a beta tester for five assistive technology software packages. She has published several articles in professional journals and has been a peer reviewer for information technology articles submitted to professional journals. She is the author of Out of the Whirlpool: The Story of a Suicide Survivor and the Rebuilding of a Life and In Dog We Trust: Independence, Thrills, and Dignity with My Seeing Eye Dogs. Read blog posts by Sue Wiygul Martin on the Visually Impaired: Now What? blog.
Sue Wiygul Martin, LVT and VRT
VisionAware Peer Advisor Life Support (PALS) Program