Painting, as well as other types of artwork, is more than just a visual experience — it can also be a rich sensory experience, an opportunity to express yourself, and a way to interact with people from all walks of life.

If you are considering taking up painting as a hobby or resuming your prior artistic pursuits, you can draw inspiration from a number of well-known artists who also had vision problems and persevered with their art. Claude Monet and Edgar Degas, in particular, wrote extensively about the effects of vision loss on their lives and on their art.

Claude Monet was a leader of the French Impressionist movement. He is perhaps best known for his series of paintings inspired by the water lilies in his garden at Giverny, in France.

Many researchers now agree that Monet painted in his distinctive style because he experienced the effects of cataracts throughout much of his later career, during which he produced some of his most characteristic work. He underwent two cataract surgeries in 1923, two years before his death at 86.

This is one of the few photos of Claude Monet after his cataract surgeries in 1923: 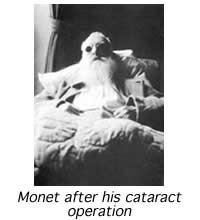 As Monet’s vision decreased, his color perception changed and his palette shifted from the pastel floral hues of his early work to the darker browns and reds of his later career, best illustrated by two of his most famous paintings. 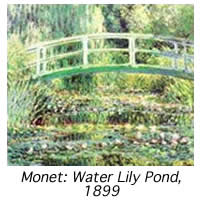 In contrast, Monet painted the same scene in The Japanese Bridge between 1923-24, when the effects of his cataracts were most pronounced. His style had changed, but his artistry was intact, as illustrated in the following painting: 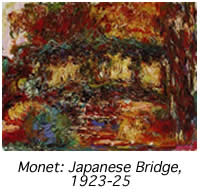 Edgar Degas was a French painter, sculptor, and engraver. He is best known for his paintings of dancers, and he excelled in capturing their movement and artistry.

Degas’ vision problems began in 1870, at age 36, probably due to retinopathy, or problems with his retina. He found it difficult to tolerate bright light, especially sunlight, and preferred to work indoors in more light-controlled environments, such as the opera and ballet stages he depicted in many of his paintings.

In 1874, at age 40, Degas also developed a loss of central vision, possibly from macular degeneration. His vision continued to deteriorate and by 1891, at age 57, he could no longer read print. As his vision changed, however, Degas learned to adapt. He began working with pastels instead of oils (since pastels require less precision), and took up sculpture, printmaking, and photography.

To better understand how Degas’s vision changed, it’s helpful to compare his paintings.

Degas painted A Woman with Chrysanthemums, which contains much fine detail, in 1865, when he was 31: 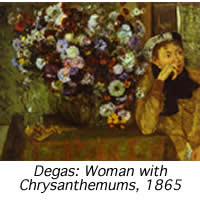 In contrast, Degas painted Two Dancers, which contains broad brush strokes and very little fine detail, in the period between 1890-1898, when his vision problems were well advanced: 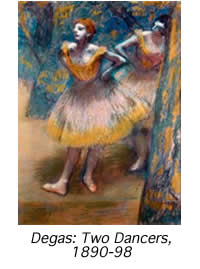 Rembrandt van Rijn was a Dutch artist, generally considered one of the greatest painters and printmakers in European art history and the most important in Dutch history.

Several researchers believe that Rembrandt may have had stereo blindness (dissimilar visual images received by his left and right eyes), since many of his self-portraits show each of his eyes looking in a different direction, as in Self-Portrait as a Young Man: 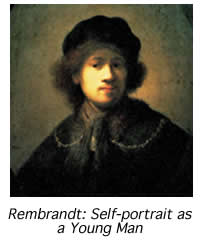 This lack of binocular vision may have caused problems with Rembrandt’s depth perception – but it also may have helped his art by making Rembrandt become exceptionally aware of light changes, shadows, and other details that helped him judge distances and depth and depict a realistic three-dimensional world on a flat canvas.

One of Rembrandt’s most famous paintings is The Night Watch (1642), known for its effective use of light, depth, shadow, and the perception of motion he created on the canvas: 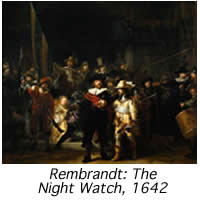 Georgia O’Keeffe was an American artist, known primarily for her abstract paintings of flowers, rocks, shells, animal bones, and landscapes.

By the early 1970s, when she was in her 80s, her eyesight began to decline, due to macular degeneration. It was then that she expanded her artistic interests and began working with clay and creating video projects. 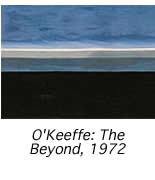 O’Keeffe also continued to work unassisted in watercolor and charcoal until 1978 and in graphite until 1984, when she was 97.

Organizational Hints and Adaptations for Painting

Here are some everyday hints to help you organize your painting area and create adaptations for your art and painting projects: