Reading for All: The Potential of the Public Library System Providing Access

Four years ago, I began to stop in the local libraries in communities where some of my clients lived to see what, if any, low vision, adaptive technology (AT) was available to them in their own community. Two libraries had video magnifiers (an electronic CCTV that magnifies reading material and projects it on a television or computer screen) available for patrons, and at least one had upgraded to Windows 7, which had a built-in screen magnifier. Were these devices used by patrons? What else was available? Did the library staff know how to use the video magnifiers, or turn on the screen magnifier in Windows 7? Did consumers in the community know that the library had devices they could use to magnify reading material in print or on the computer? 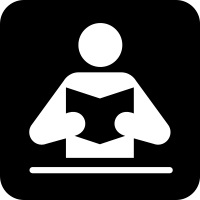 My interest in this began after meeting with many clients, often elders on fixed incomes with a vision impairment acquired later in life. Low vision technology, like a video magnifier (an electronic CCTV that magnifies reading material and projects it on a television or computer screen), or learning to use a computer for the first time, offers many alternative reading solutions for this demographic group.

The cost of a video magnifier, or software upgrades to the computer was often not an option, or they were simply unaware that these devices existed. In some instances, learning access technology on the computer, such as using a screen magnifier or text-to-speech screen reader, or learning how to use a new operating system, like Windows 7 or 8 with adaptive technology could be more convenient and cost-effective through a local community center, like the library or senior center. 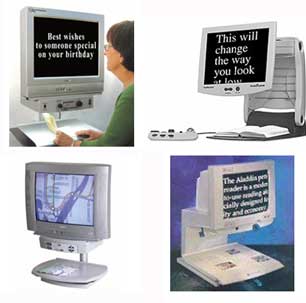 After several library visits, I became curious how much adaptive technology was available across the state in local libraries and would these devices bring patrons with a vision impairment into the library?

The project became more formal and took shape as my curiosity increased. A complete list of all Maine’s libraries (276 at that time) was used to create a random list of 51 (18%) libraries to call to ask several questions related to the availability of AT for patrons, regardless of whether the library staff was aware of it or not. Libraries were asked if they had computers running Windows 7 or Macintosh operating systems because these computers had built-in screen magnification. They were also asked if a video magnifier was available.

Results of the Project

From these calls, the following results were recorded:

Because this survey was conducted four years ago, it is very likely more Windows 7 and now, Windows 8 computers would be available to patrons. The availability of video magnifiers, at least in Maine public libraries, is likely unchanged.

Two personal observations, one made four years ago, and one made this fall will demonstrate that just because a public venue has adaptive technology available on-premises, does not necessarily mean it is accessible to patrons.

On one of my original library visits, a small city library was pleased to report they did have a video magnifier at the library, and if I waited, they would locate it. After 10 minutes, the staff person returned, apologized for the delay, and reported they had finally located it in a janitor’s closet—if I wished to use it, they would wipe it off and set it up for me! Excellent customer service, but how many patrons would know of its availability hidden in the janitor’s closet?

More recently, in another small city library, I was delighted to see six new Windows 7 desktops available to patrons and even more excited to learn upon sitting down to one, that the built-in magnifier was already enabled so that pressing the Windows Key with the NumPad “+” sign started the magnifier. When this was pointed out to the library tech person, he reported he was unaware of the magnification feature on Windows 7.

Later, I suggested to the library director developing a workshop to demonstrate the magnifier to patrons who might benefit from it, and she responded that she didn’t think there would be much interest in this, since she hadn’t heard many library users asking about it! 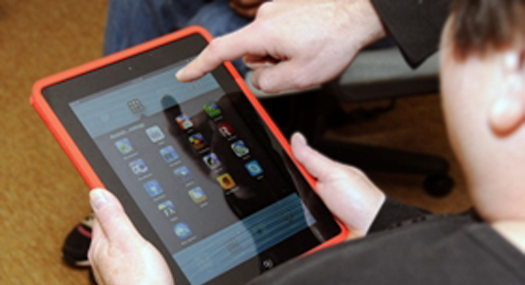 An iPad and apps for reading

Although e-readers and iPads were not included in the original research, many libraries now have both e-readers like Kindles, Kindle Fires, Nooks, and iPads that are loaned to patrons, often with book titles pre-installed. It has been my observation however, that without specific training, few at the library are familiar with the text-to-speech functions when available in the e-readers or iPads.

Both the iPad and most recent versions of the Kindle Fire HD and HDX, in addition to being e-readers, have very accessible built-in adaptive technology to allow someone with a vision impairment to read with magnification or text-to-speech.

From this research, grant funding was secured to offer basic training to the staff at three local libraries and a presentation of adaptive technology available in the library was offered to library patrons. As part of the workshop and staff training, participants were able to try a video magnifier, optical magnifier with LED light, use Windows 7 with the Windows magnifier, turn on text-to-speech with the basic Kindle e-reader, and turn on the accessibility features of the iPad such as “Invert Colors,” “Zoom,” and “VoiceOver.”

During the presentation with patrons, additional adaptive technology was demonstrated, that was not readily available at the library, including ZoomText screen magnifier (software with speech made by AI Squared), Windows 7 with JAWS (a screen reader made by Freedom Scientific), handheld video magnifier, a braille display used with Windows 7, and a Mac Book Pro with built-in screen magnifier and screen reader.

One of the conclusions to this project, for both patrons and library staff was the increased variety of options available today that didn’t exist several years ago—accessible e-readers, devices like the iPad, Kindle Fire HD and HDX, and Macintosh computers that have a high level of accessibility built right into them, flat screen video magnifiers, and smaller portable video magnifiers.

Let’s not forget to mention the utilitarian handheld magnifier—a quality optical magnifier with LED light that might be kept at a reference desk! These workshops presented an opportunity to demonstrate to the library and potential users, the types of devices available to make print more accessible to all readers.

Another observation, for both patrons and library staff was that providing adaptive technology and some very basic training with it in the library could draw community members in who had either stopped using the library because of their vision loss or were never members in the first place. The availability of devices like a video magnifier or public computer with a screen magnifier on it, had the potential to draw in new consumers, something many libraries would welcome.

One of the most intriguing observations that piqued my interest early on was hearing more than one client say, “There’s nothing in the library for me, I can’t read any more!” Likewise, on at least three library visits, I was told by library staff that “We used to have a video magnifier, but nobody used it, so we took it out!”

Clearly the introduction, training and marketing involved in successfully offering adaptive technology in a public community setting like the library is more complex than just acquiring the funding for the technology; in many cases, it already exists on technology we are using. It is now more a matter of knowing it is there and how to use it.

This project demonstrated an effective way for vision rehabilitation professionals to interact with community centers, like the public library, and consumers to create an opportunity to use adaptive technology and receive some basic training outside the more traditional medical or rehab models.

With adaptive technology becoming more a part of mainstream technology, such as the Windows magnifier, and accessibility features found on iPads, iPhones, and the latest Kindles, there is a greater opportunity to use off-the-shelf technology for compensatory skills training in a community venue like the library or local senior center.

Reading for All: The Potential of the Public Library System Providing Access
Audio Players and Talking Books