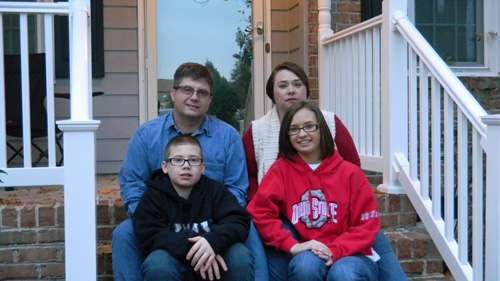 Staff Sgt. Brian Pearce, USA-Ret., of Mechanicsville, VA is pictured at left with his wife, Angie, daughter Jordan, age 14, and son Logan, age 13, at their home.

SSG Pearce lost his vision and much of his hearing due to a traumatic brain injury. On October 20, 2006, his squad was escorting a water tanker when the convoy was hit by an improvised explosive device (IED) in Mushada, Iraq. Pearce was struck in the back of his skull by a piece of shrapnel, and during a craniotomy to remove the fragments, nerves related to his sight and hearing was severed. Here is his story:

I was always interested in the military since my uncle and my grandpa were both in the service. When I graduated from high school I decided to join the Sheriff’s Department in my hometown in Ohio. I became the youngest deputy sheriff in the state at age 18.

Due to budget cuts, I was laid off after five years on the job. At the time, I was devastated but decided to pursue a military career and, shortly after my layoff, I was inducted into the Army in May, 1992.

I went to boot camp in Ft. Bliss, Texas. After boot camp, I was stationed at Ft. McClellan, AL. I left the army in 2000 and had a service break with 1.5 years in the Reserves and 1 year of National Guard. In December 2003, I re-enlisted and went to Ft. Sill, OK for Advanced Individual Training (AIT). I retrained as field artillery chief surveyor. After AIT, I was posted to Ft. Wainwright, Alaska in April 2004.

Let me add, I married my wife Angie in 1996 after a whirlwind courtship of only 2 weeks. It wasn’t supposed to last (according to the critics) but we will celebrate our 16th anniversary in December.

From Alaska, in 2005, I went to Iraq. I flew unmanned aerial surveillance vehicles (UAVs). The type I flew is called the Raven and is similar to a model airplane.

After a few weeks, I was singled out by the Battalion Commander to become a Quick Coordinator Reactionary Force Leader (QRF). We were the security teams who protected the Commander on ambassador missions to the Sheiks and other high officials. They presented a very high target on these missions and needed excellent security.

I was put in charge of building my team of 13 and training them with only 6 weeks of time before deployment! Most of the team was made up of 18-year-olds who had never been away from home! The team included two medics. We trained for 18 hours a day and were ready on the day of deployment.

I was a QRF for 4 months and then was reassigned to desk duty to help oversee other operations by radio. After a tour of 12 months, I was sent back to the states for another special assignment but was redeployed 2 months later. This was due to my 172nd Brigade being extended for 120 days and moved to Baghdad.

A Special Place in Iraq

While in Iraq on my first tour, my team and I had a chance to visit the Hatra Ruins which have a great deal of religious significance and include 16 baptismal pools still in working order. Visiting this holy place had a strong impact on my team and they still talk about it today. UNESCO has recognized Hatra as a World Heritage site as it is also believed to be the ancient lost city of Tayyab.

Second Tour in Iraq and the Bombing

I was redeployed because of my brigade’s extension to Baghdad. When I went back to Iraq I was there for only 60 days before I was injured. I was the gunner on top of a vehicle in a convoy. Ahead of us was a water truck that looked like a fuel truck and we believe that was the actual target of the Improvised Explosive Device (IED). IEDs are cheap to make—around $10—and were made from nails, artillery rounds, mortar rounds, C-4, and wrapped in plastic. This one had a wire, which a soldier found. Through it he was able to locate person who detonated the bomb.

I was the only person injured. I had immediate care on the scene from the medics. The shrapnel from the IED is what did the damage. It shredded the optic nerve. I was clinically dead, but the medics brought me back.

I was taken to the field hospital run by the Air Force where an emergency craniotomy was done and the shrapnel taken out. I was there for 48 hours, much longer than normal because of medical problems I having.

After that I was air-lifted to a hospital in Germany where I had a bleed out and had to have emergency surgery. I spent 1.5 days in Germany. I was then sent to Bethesda and was in ICU for 1.5 days. Angie met me there on October 24. I was then transported to Walter Reed and was in an induced coma.

Within a few days they started to bring me out of the coma but my brain was not allowing me to wake up. It took 6-8 weeks to come out of it. I was in an amnesiac state during this time. To this day I credit Angie with my coming totally out of this state. I had always associated the smell of her hair with her and my love for her. In fact, she sent me pillowcases with the scent of her hair, while I was posted in Iraq.

So when she saw me at Walter Reed, she ran her hands through her hair and put her hands under my nose. I think that smell roused me. The first thing I remember is hearing her yelling at the doctor and wondering why she was in Iraq!

Angie Takes Up the Story

Angie takes up the story as Brian does not recall what happened exactly. His short-term memory is not good due to the traumatic brain injury (TBI) he incurred. Brian was in the ICU at Walter Reed for 47 days and then was sent to the Hunter Holmes McGuire VA Medical Center in Richmond, VA, where he was an inpatient for 30 days and had all types of rehabilitation. He had physical, speech, occupational, kinesiology, and blind services therapies. It was the third week of December before Brian found out what was going on with his vision, due to the efforts of the McGuire vision rehabilitation staff. He has about 3% vision, although that vision is 20/20.

He was released to outpatient therapy in January, 2007. He was supposed to go back to Walter Reed, but his case manager at the VA intervened and Brian was allowed to stay at McGuire for outpatient services through the Polytrauma Center and allowed to report in by telephone. In March, 2007 his case for retirement due to medical reasons was initiated and he officially retired in December, 2007. In the meantime, he was sent to the West Haven Blind Rehabilitation Center. Training was cut short due to his retirement but he was able to go back in the spring of 2008 to complete it. They were able to supply him with prism glasses that help him with his vision. They also supplied an adaptive computer with speech.

In June 2009, McGuire VA set up a transitional program and he receives services through that program. He is continuing with his mental health therapy today. That is his major problem at this time since the brain injury continues to cause problems. Some days he wakes up with a “12-year-old” mentality and other days as an adult. This is difficult for him and for the family. Brain injury is a very complex issue.

What Impact Has Brian’s TBI Had on Your Family?

I have been getting paid as a caregiver now for one year under a new program—Comprehensive Assistance for Family Caregivers. There is also a website to learn more about what the VA offers to caregivers. Brian needs help with managing his medications and sometimes with his clothing. It is a day-by-day situation.

Unfortunately, although the act provides for respite care, that is only inpatient. Brian is OK at home when I am gone a short time but I would not want to be gone overnight. Also, there are the kids. The Caregiver Act does not provide assistance for children.

It has been hard for me and our children (ages 13 and 14). They have had a difficult time understanding what is going on with their father as he changes from day to day. I have no family in this area. We elected not to go back to our home state Ohio since the VA here in Richmond knows Brian, has all his records, and has more personnel to deal with his TBI issues.

I guess my major concern is his mental health issues and I don’t think the VA has a real handle on how to deal with them at this time. Having the Polytrauma Center has helped. On a positive note, I have been able to go back to school and get my undergraduate degree in business administration and health services. So I can really put my knowledge to work.

Angie has been incredible. Having TBI has caused problems and we have dealt with them as a couple. I never know how I will wake up in the morning. She is always there—and she reaches out to other families who are going through similar problems. Right now, I am not where I want to be and I guess I will never be what I want to be. It is truly one day at a time.

I want to let others know about my story and to give them courage to keep on trying. Keeping up with your friends is critical. I have a Facebook page and my army buddies interact there all the time!