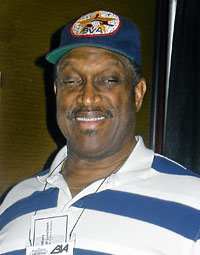 Paul Mimms became visually impaired while serving in Vietnam in 1968, but he does not consider himself a war hero. His vision loss, he explains, was the result of an accident on board a ship in the Mekong Delta. Mimms was reporting for night watch when a pulley used to lower ammunition into storage, swung and hit him hard in the left eye. Dazed, he picked himself up. “I tried to light my cigarette in the dark and the light of that cigarette hurt my eyes.”

A few months later, the 23-year-old had lost 90% of the vision in his left eye when the blow precipitated the onset of glaucoma. Mimms received a medical discharge from the Navy and returned to his former job at a Ford Automotive Assembly plant in Kansas City, Missouri.

Mimms Faces Hazards on the Job

Unfilled in his work, Mimms was restless. He bounced around a bit in retail and then worked his way up to manager of a fast food restaurant. But by 1983, he started developing symptoms of glaucoma in his good eye, and found that his vision loss was a serious liability. In the 80s, he explains, fast food restaurants were fighting hard not to be drive-in banks. “I had experienced 23 hold-ups on the job and had more guns pointed at me than in Vietnam.” Mimms realized he couldn’t always see that the lone customer slinking up to a cash register in the wee hours was holding a gun. Fearing his disability would endanger his co-workers, he resigned.

From there, Mimms took on odd jobs like house cleaning but mostly he depended on his mother and sister to keep him afloat. With no prospects, his mood spiraled downward. “I hit the pit of depression,” Mimms remembers. He crawled into bed and stayed there for 3 days, barely eating or drinking. “I thought ‘why me?’ and mentally created a list of other people that this should have happened to!” At last, he pulled himself up to sit on the edge of his bed and took stock of what he had left — family, motivation, intelligence. “The list of what I had was longer than the list of what I didn’t have. So, I started to ask, ‘Why not me?’ “

His first step to taking control of his life was to swallow his pride and apply for food stamps. Mimms stood in the Kansas City State office building, nose up against the form, and completed the paperwork. Having accomplished that goal, he had no idea what the next day would bring. But then, quite literally, Mimms was given a sign. Fishing around for the 85 cents in his pocket to pay for a bus ride, Mimms dropped a dime. Without it, there was no way back home. On his hands and knees, he felt around until he found the coin. Looking up, a sign caught his eye: Bureau for the Blind. A security guard led him to the agency’s door and Mimms signed up for services on the spot.

So, in 1985, Mimms began vision rehabilitation at an agency run by the Rehabilitation Institute. The program covered Orientation and Mobility training, living skills, Braille and a psychological test that included an Occupational Interest inventory which revealed he would be well-suited for psychology, social work or any other career that tapped into his people skills.

Though he graduated at the top of his high school class, Mimms had abandoned his college dreams before joining the service when tuition costs became prohibitive. His aspirations rekindled, Mimms went on to earn a BA in Sociology at the University of Missouri-Kansas City in 1989 and a Master’s Degree in Social Work in 1991 from the University of Kansas. Mimms’ education coupled with his personal experience laid the foundation for a successful career serving visually impaired veterans as an instructor of adaptive technology and as a counselor. He was able to achieve these goals partly due to the fact that during college, Mimms was issued a CCTV and received training at the Hines VA Blind Center in Kansas City.

While still a busy college student, Mimms began to demonstrate a strong commitment to volunteerism and a passion for serving others who were dealing with vision loss. Mimms started support groups in conjunction with the blind rehabilitation organization where he had gotten his own training. What frustrated Mimms the most was that resources and services were available, but people with vision loss didn’t know who to ask or where to go for help. Mimms recalls, “Back then we didn’t have the internet. If you could find places like the National Federation of the Blind or the American Foundation for the Blind you could get information, but too many people didn’t know how to find these organizations.”

Mimms was introduced to the Blinded Veterans Association (BVA), a member-driven national advocacy group, and became a life-long member. “BVA offers members the opportunity to be a voice in congress and the executive branch so we do not stand to lose what we’ve gained in terms of benefits and services,” Says Mimms. One important legacy of BVA is the establishment of all the rehabilitation facilities at 13 VA hospitals around the country. BVA carefully guards the right of veterans to get free vision rehabilitation services regardless of whether they lost their sight in combat or an unrelated car accident.

Mimms has had many leadership roles at both the regional and national level of the Blinded Veterans Association. He’s been instrumental in recruiting new members and reinvigorating regional groups. He was honored by the organization for his lifetime contributions at the 2014 BVA annual convention, receiving the Major General Melvin J. Maas Achievement Award. In addition to his volunteer work for BVA, Mimms worked as an advocate in other capacities. Mimms served on the Mayor’s Council for Persons with Disabilities and the Governor’s Advisory Council for Rehabilitation Services for the Blind. Mimms was serving on the Board of Guide Dog Users Incorporated in 1995-1998 when that organization won a lawsuit against Hawaii for banning guide dogs in that state.

A Career Dedicated to Veterans with Vision Loss

Reflecting on his career serving blinded veterans through the VA, Mimms says that his favorite role was as Visual Impairment Service Team (VIST) Coordinator. As the gatekeeper for all services, the VIST coordinator is the first point of contact for veterans. Many met Mimms reluctantly, and more than a few were pushed in the door by their wives, who fulfilling the role of their generation, had grown weary of waiting on their husbands. Mimms’ self-confidence as a person who could do anything but see encouraged others to seek more independence. “They might not have wanted to enter the program, but every vet was sad to leave,” Mimms noted.

The number of visually impaired veterans Mimms has served over the years is likely in the thousands. It’s not surprising that he has many stories of traveling across the county and running into veterans whose lives he has touched. “I’ve reached the point that I am recognizable,” he laughs.

Now retired, Mimms enjoys reading and taking long walks with his guide dog. Still, his work with BVA remains a passion. Mimms has recently been elected Secretary at the national level and is busy launching a technology working group. Mimms is grateful to be very active and productive. “I have aspects of myself to give to others and that gives me great satisfaction.”

A nonprofit organization, the Blinded Veterans Association relies on donations. To learn more about contributing or volunteering go to their website.