Jason Murray, Athlete of the Month

Jason Murray is discovering the power of adaptive sports. He has done so well that in June 2013, he was named athlete of the month by Team Racing for Veterans (TeamR4V). 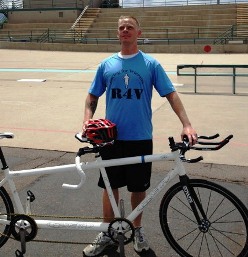 Jason with his tandem racing bike

Team R4V is on a journey of giving back to America’s heroes. Specifically, Team R4V fosters a commitment to veterans by promoting awareness, supporting rehabilitation, and empowering individuals to follow through on a path of healing with a sense of pride and accomplishment. Through the unique power of athletics, we aim to help disabled veterans not just get well, but get better—achieving more than they ever thought possible.

It doesn’t look like Jason accumulated any moss as he rolled into his life as a person living with blindness. As he says in the TeamR4V article, “After being released from the hospital, I now had to try and adjust to being a blind disabled combat veteran, which was not easy. I have to say that with the help of my family and God I did the best I could. For example, I was released from the hospital in June, and I started learning braille in July, bought a house in August, got married in September, and traveled to various locations telling my testimony, as well as going through other surgeries. I finished learning braille in April of 2005, went to a blind rehabilitation center, then started college in August.”

It shouldn’t be a stretch to imagine that I had to catch up with Jason in order to write this article!

Sue: In which branch of the military did you serve? Were there any particular reasons you chose that branch?

Jason: I chose to enlist in the Marine Corps because of my interest in their Scout Sniper program. I originally was looking at joining the Air Force to become a combat controller but later decided against it. Reason being is that if I failed the school to become a combat controller, I didn’t want to have to sit behind a desk. I wanted to get in the fight and figured the Marine Corps was the way to go. At least in the Marine Corps, if I failed at the Scout Sniper program, I could as least be relegated back to an infantry unit.

Sue: When did you enlist? Were there things that happened in the country, like 9/11, that helped you decide to enlist?

Jason:Yes the terror attacks played a big role in my enlistment. I turned 18 on Sep. 7th and shortly thereafter the attacks occurred. The way I looked at it was that every generation has its opportunity to serve and defend this country and this was my turn to do so. Rather than enlisting right away I was on the delayed-entry program and completed a year of college before going to boot camp. So on June 23rd, 2003, I went off to summer camp, called Marine Corps boot camp.

Sue: To which theater were you deployed?

Jason: After completing boot camp in September, I came home for a short 10 days and then went off to the School of Infantry. I completed infantry training in December and was sent to the 2nd Battalion, 4th Marines on the first of January. We later deployed to Iraq the following February. In particular, the city we went to was Ramadi, which is the capital city of the Al Anbar province, about 60 miles west of Baghdad.

Sue: Can you tell us how you felt when you knew that you were going to be deployed?

Jason: I really can’t say that I remember any one particular feeling or emotion. Being a Marine you put your game face on and hide any feelings of fear. The way I looked at it was that this was the reason I joined, which was to go and take the fight to the enemy.

Even when we were deployed, it was almost surreal, until the bullets started flying. My opinion is that there is a reason that young men and women fight in wars, and that is the simple belief of invincibility. Never once did I think something bad could happen to me. It could happen to someone else but not possibly me.

Sue: I expect that readers would be interested in learning about what it was like to be “boots on the ground” in Iraq. Can you tell us about an average day during your deployment?

Jason: During my time we stayed pretty busy doing foot patrols throughout the city in order to make our presence known. At that time, the main focus was on winning the hearts and minds of the local population in an attempt to get them to turn on the insurgents. So we would patrol through neighborhoods handing out candy to kids, medical supplies, and helping out where we could.

We also conducted improvised explosive device (IED) sweeps,which basically meant doing a foot patrol looking for hidden bombs before they blew you up. However, this task was made extremely difficult because of the enemy’s ingenuity and the living conditions of the city. What I mean is that there were piles and piles of trash every where and a million places to put a bomb. It was like walking through a landfill trying to find a bomb. We stayed extremely busy and did not have a lot of down time.

Sue: How did your deployment end?

Jason: My deployment ended when I had my “bad day at the office.” While patrolling on foot, an IED (improvised explosive device) detonated three feet in front of me, killing the Marine three feet to the right of me. The blast crushed the right side of my forehead; sent shrapnel through my right eye into my brain; had shrapnel impact my left eye, leaving me totally blind; and had 8 teeth blown out.

I awoke a month later, totally blind, having no idea what had happened to me or where I was.

Sue: As a veteran, are there things you’d like the public to know about your service that the typical American doesn’t know?

Jason: When you were over “there,” half-way around the world, the only family you have is the person to your left and to your right. The burden of the responsibility, knowing that if you don’t do your job he or she could die, as well as if they don’t do their job you die. More often than not, when things go bad, you are not fighting for this country, per se, or even the flag, you are fighting for each other.

A “thank you” goes a long way because this country’s service members are truly the quiet professionals.