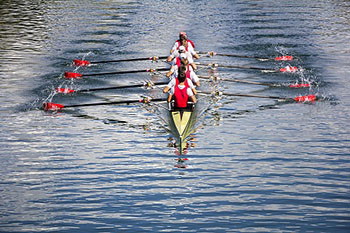 Mike Irons was born blind. He came across the Visually Impaired Adaptive Rowing Project (VIARP) Vipers Rowing team in spring 2011 and has been an active member at practices and in races ever since. His story demonstrates the challenges and perseverance of rowing blind when fundamental rowing concepts—dropping the blade in the water, sensing the catch, slowing the slide—are not in your visual memory bank. With unwavering determination on his part and the patience and creativity of his coaches and volunteer teammates, he learned these new concepts. Once they were learned, repeated extensively, and committed to memory, they were soldered into his mind. Now, they’re there for good.

Mike Irons: I found out about this program through a disability awareness day that I went to back in 2011. I was walking through the different exhibits, and the person that was guiding me through the exhibit said, “and over here we have the rowing team.” I walked over to the individual that was representing the program and gave them my number. A couple weeks later, Gary called me. He gave me the details about the program, told me where they’d be practicing, and in April 2011, I showed up for my first practice.


AFB: What do you remember about the early days of practice?

MI: After going out on the barge (a boat made for 8 rowers that is more balanced). Comparable to having training wheels on a bike, the barge has 4 rows of 2 rowers each, sitting side by side–instead of 8 rowers in one row of seats. Similar to a Greek/Roman galley, there is a platform between the rowers where the coach can walk and provide hands-on instruction regarding body positioning and form. a couple times for a safe trial run, they had us get in this rowing shell. I had a little bit of trouble in the beginning because I couldn’t tell when I was supposed to get my oar in the water. I wasn’t able to get the feel of the boat down, and there was so much new vocabulary. But I kept showing up and kept taking their advice and kept trying in whatever boat they put me in. I just kept at it.


AFB: How did the coaches work with you to improve those skills and techniques?

MI: Well, in addition to practice, the coaches suggested that I head over to the dragon boating team (dragon boat: human-powered boats filled with ideally 20 paddlers sitting in pairs, a drummer keeping the rhythm, and a sweep, who steers the boat.) They do not require the rower to move their body up and down on a sliding seat. to get some additional experience with matching and keeping rhythm. It was one way to get extra time on the water and stay involved. I did that from 2011 to 2014.

Then, in 2015, VIARP brought in an additional rowing coach, and I was placed in her boat. She knew I was having trouble with timing and placing the blade in the water, so she put me up in stroke seat (The stroke seat is the first seat at the front of the boat, also known as seat number 8. They are responsible for setting the pace of the boat, and keeping control throughout the positions of each stroke) and told me that I just needed to relax and work on rowing at a steady pace. She said that once I started rowing, she wanted me to keep on rowing until she told me to stop. That was a challenge in itself. Some boat members would tell me that I was always pausing at the catch (The catch is the beginning of the stroke, the finish is the final position, the slide is how one moves from the catch to the finish and visa versa), that I should drop the blade in quicker, but she didn’t give up on me. I stayed there for a couple months.


AFB: What methods did she use to reinforce those skills and techniques?

MI: After a few weeks, she moved me into two-seat (in the bow of the boat), and she sat in the bow. This way, she said she could feel the boat for herself to work with me and tell me when to move up the slide (Each rower is sitting on a seat that moves along a slide), when to drop the oar in, and when to start the next stroke. After a few practices working with me this way, she asked a volunteer to take her place and work with me. That volunteer was able to actually make me understand the stroke for the first time since I started rowing. He made me make progress. So, from the coaches encouraging me to stay in the boat and getting help from the volunteer, I learned when and how to get my oar in the water on time.


AFB: How did that volunteer give you hands-on assistance? What did he or she say that changed your perception of the stroke?

MI: What he would do is he would sit behind me and he would count, very slowly, in sync with the rhythm of the rest of the boat: One…two…three…catch. While he was counting, I was supposed to be properly distributing those three numbers along the slide. If I stayed in sync with his counting, I wouldn’t get to the catch too quickly, and I wouldn’t fall behind. He just stayed on me about that, every stroke we took, he was my metronome, just kept saying it, every stroke. When you can’t see it, you have to feel it, and once you feel it, it makes sense.


AFB: Now that you feel comfortable getting into a boat and adjusting to their rhythm, what has changed about your rowing experience?

MI: In 2015, I got to participate in a couple of races: the 1,000-meter race in the spring of 2015 and two other races in the fall. I was only supposed to be in the 4,000-meter race, but they needed another person for the 500-meter race. I was able to do that. It was hard, but I was in that race and learned a lot in those two minutes about rowing and racing.


AFB: What is it about racing that you really enjoy?

MI: I really like getting out there to see how well we can do against the other teams, and I think my biggest goal is always to come in third place or second place. I don’t think we expect to win every race, but we do like to at least place in the race and know that we’ve done as well as we can.


AFB: What makes you most proud to be a rower?

MI: One day we were out in the quad (a four person shell or boat in which each rower has two, instead of one oar) and Gary put another blind rower in the boat directly behind me. He told me that while I was rowing I was going to have to call when I got my oar in the water so the guy behind me could tell when it was time to row. So, I called it. I called it just like that volunteer called it for me. I said one…two…three… catch, and I tried to be as consistent as I could be. I continued to call that sequence for the rest of practice. We weren’t perfectly in sync that first day, but we were rowing together. It worked out. By the end of the week, this rower caught on, and we were in sync. I guess that lesson came full circle, and I’m glad it did.

Find out about the Visually Impaired Adaptive Rowing Program

Read about George Shreve, another rower who is visually impaired.