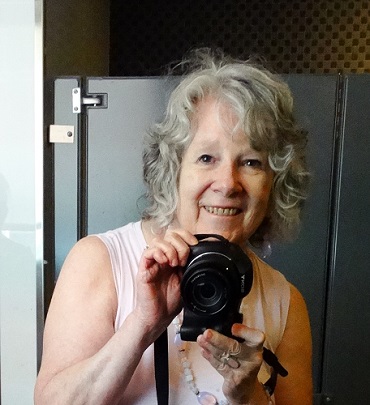 A gifted writer and visual artist, Lynda Lambert is a new member of VisionAware’s community of Peer Advisors.

A retired professor of Fine Arts and Humanities at Geneva College in Beaver Falls, Pennsylvania, Lambert’s creative nonfiction, essays and poetry have been featured in anthologies, academic books and journals as well as literary magazines. She is a published author of the book Concerti: Psalms for the Pilgrimage, a collection of poetry, reflections and drawings. In addition, she keeps up with two blogs, one available on her Lynda Lambert website and one entitled SCANdalous.

Lambert has exhibited her paintings at juried shows in the United States and abroad since 1976 when she first opened her studio, River Road. After losing her sight in 2007, Lambert began earning recognition as a talented potter and mixed media fiber artist.

Lambert recounts how she woke up on New Year’s Day in 2007 with blurred vision. Always a hard worker, Lambert first assumed that she was unable to focus because her eyes needed a rest. Ultimately she found a specialist who diagnosed her with Ischemic Optic Neuropathy, and explained that she would never regain sight in one eye. Undaunted, she embarked on a trip abroad, leading her Geneva College students on an art and literature tour of Europe. Lambert did not let on that she was struggling to see. She asked her students to call out train stations as they passed and avoided falls by closely following behind the group on flights of stairs.

In October of that year, Lambert left for a long-anticipated sabbatical to explore the writings and visual art of Hildegard of Bingen and investigate the ideas of adornment for medieval women. Lambert had been touring medieval art exhibitions at museums in New York when she lost vision in her remaining eye. The trip was cut short and Lambert returned home to receive medical attention. Unable to offer treatment, her doctor simply handed her a catalog of adaptive aids. “He didn’t seem to have any idea of how a person goes about rebuilding a life again.” Lambert said.

For several months, Lambert passed the time listening to public radio and audio books, but she knew that there had to be a way to rejoin the world beyond her walls. Eventually a physician friend of Lambert’s introduced her to a former patient who was blind from birth. Lambert learned that she could get help from Blind and Vision Rehabilitation Services of Pittsburgh, the Keystone Blind Association in New Castle, and the Pennsylvania Bureau of Blindness and Visual Services in Erie, PA.

Soon Lambert was learning to cook, use a computer with talking software and navigate traffic in downtown Pittsburgh with a white cane. Lambert had been a knitter since childhood and, as her confidence returned, she began bringing her knitting to rehabilitation classes. She had regularly knit sweaters for needy children, and it bothered her that a sweater she had started before her sight loss remained unfinished. That nagging feeling was the impetus to relearn the craft non-visually. The fruits of her efforts resulted in a beautifully knit sweater, but also an evocative and poignant essay, “Prologue: In which I Knit a Life Back Together.” The piece serves as an introduction to a collection of poetry and essays entitled Walking by Inner Vision: Stories of Light and Dreams, scheduled for publication later this year.

Sensing she was ready for another challenge, a colleague suggested Lambert return to making pottery, an art form she had practiced in college, but had long since abandoned. “Once I got clay in my hands, it all came flooding back,” Lambert said.

The Dragon’s Healing Breastplate: A Talisman 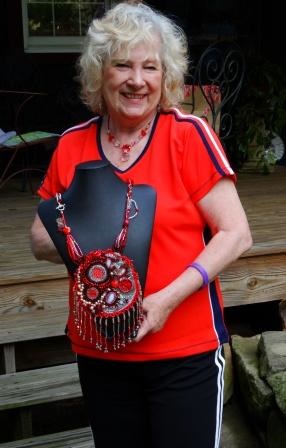 As part of her rehabilitation program, Lambert met with a low vision specialist who recommended an Acrobat Electronic Magnifier and encouraged her to get back to doing what she had been doing before she lost her sight.

The magnifier’s camera focuses on the artist’s hands at work and projects a magnified image on a monitor. For her first project, Lambert decided to finish a piece she had started in a bead working class during the brief period when she had sight just in one eye. She barely managed to follow the professor with a magnifier and two pairs of glasses, but had made some progress on a talisman that featured an image of a dragon. On completion, Lambert christened the work “The Dragon’s Healing Breastplate” because it rejuvenated her, fully returning her life as a working artist. This was to become a seminal work in a series of talismans, medieval tokens thought to be imbued with mystical powers that could protect and bring good fortune to the owner.

Lambert describes how the process of creating each talisman begins with a found object. “I am intrigued by the idea of having something on your body that comes from nature or finding something broken that you turn into something beautiful.” The tangible object is the seed from which the work emerges, nourished by an emotional attachment to a person, thing, idea or even a favorite line from literature. “My Bleeding Heart” grew out of a red-orange pottery fragment and a story she had read on Facebook about a baby girl’s battle to overcome multiple birth defects. Lambert says that all her love and prayers for the girl were woven among the beads and tiny hearts. When the girl passed, what had started as a tribute became a work in her memory. Understandably, Lambert is not willing to part with it, but she has loaned “My Bleeding Heart” to the APH so that they might reproduce the image in cards and calendars.

Getting Award for Beadwork

Recently Lambert traveled to Louisville, Kentucky to receive a 3rd place award for her encrusted beadwork at the Museum of the American Printing House for the Blind (APH) during the their annual meeting. She describes attending the “Insight 2016” show as one of the highlights of her life because she was in the company of other artists, both adults and children, who had vision loss. “I was just so overwhelmed,” she says. Lambert’s winning piece entitled “My Bleeding Heart” is an ornate talisman designed to be worn around the neck. Admiring the intricate detail and vibrant combinations of red, white and pink, one would never suspect that Lambert can no longer see color. “My Bleeding Heart” was in the exhibition for the convention. APH keeps all of the art works until February when they will make decision as to which ones will photograph best for their cards and calendars. She does not yet know if hers will be chosen. 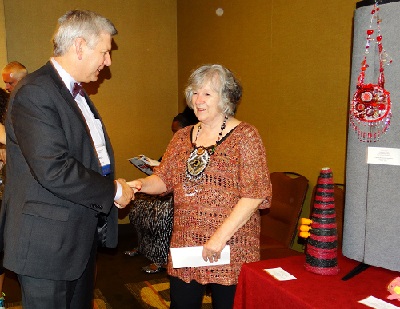 Working Both Visually and Non-visually

Lambert says she relies on her visual memory and heightened sense of touch to create her encrusted beadwork. “I have some peripheral vision, but the lighting conditions have to be just right. I can’t see anything on my keyboard or on a piece of paper.”

Her husband and daughters help her identify colors and maintain drawers full of beads meticulously categorized along the spectrum of the rainbow. Lambert works with just two colors at a time so she can differentiate them by contrast. Using the electronic magnifier can be fatiguing, so Lambert only uses the device to position materials among the infinitesimally small gaps in her fabric art. Lambert designs her work for visual appeal, but at the “Insight 2016” show she was delighted to discover they could be enjoyed tactilely. Introduced to two young boys who were blind, Lambert removed a talisman she had been wearing around her neck and placed it in their hands so they could touch the various crystals, stones and fringe work surrounding the metal diamond at the center. Lambert truly captivated their imaginations when she described how medieval warriors would carry these powerful tokens into battle.

The Serendipity of an Art Class

It is no wonder human kind has looked to mystical objects, like talismans, bring good fortune when so much of life unfolds through serendipitous events. It was a chance encounter that led Lambert to discover art for the first time in her mid 30s. “I was a steelworker’s daughter and did not grow up going to art galleries or museums.” Lambert was busy raising five children when a friend she had met in church invited her to attend the art class she was teaching. Lambert was encouraged to finish her first painting for an exhibition held at local college, but the concept of an art show completely eluded her. “I remember my exact thought process.” she laughs. “So, let’s see, people do paintings, then they hang them up somewhere and then other people come and look at them. That’s just weird!” But she was hooked and for the next few years the kitchen table was her studio. “I’d get dinner for my family, clean up the kitchen, and then paint until late at night.” Later she pursued an MFA in Fine Arts and an MA in Literature simultaneously, baffling both artists and the writers who couldn’t comprehend how she could comfortably reside among both tribes. Yet, Lambert built a career writing, making art and immersing her college students in the rich traditions of both disciplines.

Lambert describes her life as multi-layered as she alternates between visual art and writing. Currently, Lambert is simultaneously working on a new series of talismans and a book of abecedarian and acrostic poetry. When asked how sight loss has changed the way she makes visual art, she expresses amazement that her sense of color is better than it ever was. More importantly, she also finds that she approaches her creative work with much less trepidation. She says, “All the fear is gone.”

One can speculate that by overcoming vision loss, a person develops a great faith in his or her ability to start anew and perhaps that self-confidence permeates all aspects life. Lambert muses that this is a phenomenon worth exploring in an upcoming essay, poem or blog post. For now, however, she concedes that the source of this new-found boldness is a mystery to her, as she happily embraces it. “I only know that I work with an abandon that I didn’t have before.”