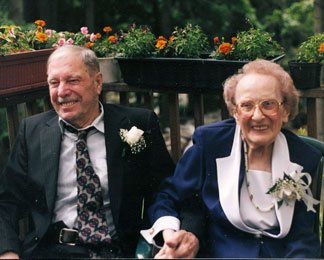 When my parents were in their 80s, my brother and I noticed how time was finally catching up with them and this vital, energetic pair were indeed less able to do things on their own. Sure, my father still climbed up on the roof to fix a leak and he still drove from Indiana to Florida for the winter. But was it really safe?

My father was in the early stages of macular degeneration and had diabetes. My mother, however, had had a stroke, her balance wasn’t good, and she had cataracts. But they didn’t want to talk about “future” plans, because all that meant to them was loss of independence and a feeling of incompetence. My brother and I both lived out of state and we worried.

But when my father told me proudly how he coped with driving while not really being able to see, and when I rode with him and saw the effort it took for him to do this, it was time to intervene. He’d been driving since the age of 9, and it was not an easy discussion. He got a bit angry, actually. And my father was never cross with me, so I knew just how much my lack of confidence in his ability to cope had hurt him.

Mom couldn’t drive safely either, and they lived in the country with a five-mile trek to the grocery store. But with gentle prodding, he arranged to go shopping with a neighbor and to get a ride to church with another friend. Doctors’ visits were still a problem.

Time to Step In

The local minister called me to say it was “time to be the parent; your parents are now your children and you must tell them what to do.” That didn’t sound like good advice to me. My parents weren’t children and they deserved the right to decide what was best for them. And eventually, in their nineties, they did.

When my mother fell once too often, and my father could no longer see to do the cooking, they sold the home they had built together, said good bye to friends and family, and moved to New York to live in my home. That was a very tough decision, but we made it together.

But what was important was how to help them feel not only welcome, but useful members of the household. They were really worried about the extra work for me and wanted to help. They both had vision problems, and I didn’t really know how best to let them help me. Their doctors just kept telling me what it wasn’t safe for them to do things.

The Hunt for Information

I looked for information about macular degeneration and cataracts on the internet, but mostly I just found information about what these conditions were. There really wasn’t much practical information on how to cope with daily living tasks, or how to help my parents remain as independent as possible in spite of their vision problems. And at this point in their lives, they were resistant to getting rehabilitation training.

“Can’t teach an old dog new tricks,” said my father. “Oh, it’s too much trouble. I can manage,” said my mother. I needed how-to information and practical tips, but I was on my own

Making Simple Changes in the Home

My father had always done their laundry, but couldn’t see the markings on my washing machine. I took a wrap-tie used for bags; one of those rigid ones made of wire, and cut a strip and glued it to the “Normal Wash” setting so he could feel it with his fingers. I did the same for the dryer.

Mom could see well enough to fold their laundry for me to put away. We attached a lighted magnifying lamp to a desk where my mother could design and write greeting cards to her long list of friends and another on her dresser so she could apply her makeup, something she did every day. I found a jewelry organizer that hung on the back of the closet door with large see-through pockets to organize my Mom’s favorite pieces.

I found a clock that had different bird sounds for each hour so Mom could know what time it was by birdsong. We found TV remotes with big controls. I made a template my dad could use to sign checks so he could still pay his bills and made an appointment for him to discuss his finances and transfer his accounts to New York so he was still making the decisions.

I asked my mother to help me plan meals and make up the grocery list. My father came with me to grocery shop and taught me how to pick out produce by smell and touch.

Then I found some software that could record personal stories and arrange them by the times they occurred so that both my parents could reminisce and at the same time leave a legacy of what it was like before there were telephones, or how they survived the Depression, or how hard they worked to build that house in Indiana.

I got a large button tape recorder that my mother could use, and they turned it on and just talked. Later, I would enter it into the computer and add a couple of photos that went with the story, such as the house as it was under construction.

A Care Giver and Receiver

I know they hated to give up their home and worried about becoming dependent and a “burden” on me. But truly, these five years I had with them at the end of their lives were a happy, rewarding time for all of us. Having them with me was a lot easier than worrying long-distance, and I kept uppermost in my mind their need to feel needed and a source of wisdom and advice and, yes, fun too.

Yes, I was a caregiver but I was also a care receiver. I just wish I had had VisionAware then; I could have really used the practical tips and self-help information on how to help my parents cope with their vision problems.