Today, the white cane isn’t just a tool used by travelers with vision loss. It is a symbol for members of our community who are blind or visually impaired. White Cane Safety Day is observed annually on October 15 to recognize the many achievements of blind and visually impaired citizens and the white cane as a tool promoting independent travel.

There are references of blind travelers using a stick, cane, or shepherd’s staff as a tool for independent travel since biblical times. It has only been during the last century that the white cane has served the dual role of both a tool for travel and symbol identifying the user as a blind traveler. As early as 1921, artist James Briggs, who lost his sight in an accident, claimed to have used the first white cane as a symbol when he painted his cane white to alert passing motorists that he was a blind traveler. Ten years later, in France, Guilly d’Herbemont undertook a national "white stick" movement to promote the use of white canes. This idea spread to England when the BBC suggested in press coverage of this movement that all citizens who were blind or visually impaired be provided with a "white stick" as a universal symbol for a blind or visually impaired traveler. 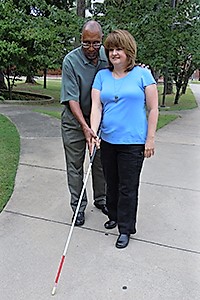 In 1931, the Lion’s Clubs in North America independently began promoting the white cane for travel when one of its members observed a blind traveler at a street crossing using a black cane for mobility, which was barely visible to motorists and passers-by.

After blinded World War II veterans began returning home in greater numbers and seeking greater reintegration into their communities, Dr. Richard Hoover developed a longer white cane or "Hoover Cane" to be used both as a tool for travel as well as a symbol. In the decades prior to the Hoover Cane, the white cane was often held outright by travelers in a fixed, diagonal position.

Peoria, Illinois, was the first community to pass a special ordinance for white cane travel in 1930, which granted travelers with a white cane the right of way. Five years later, Detroit passed a similar law, later adopted by the state of Michigan. On October 6, 1964, after lobbying by various organizations, a joint resolution of Congress was enacted, which read, "Resolved by the Senate and House of Representatives that the President is hereby authorized to issue annually a proclamation designating October 15th as White Cane Safety Day and calling upon the people of the United States of America to observe such a day with appropriate ceremonies and activities." Within hours, then President Lyndon Johnson, proclaimed October 15th as "White Cane Safety Day." (To see the proclamation, go to this website.)

In 2000, President Clinton reminded the nation that on October 15, "With proper training, people using the white cane can enjoy greater mobility and safety by determining the location of curbs, steps, uneven pavement, and other physical obstacles in their path. The white cane has given them the freedom to travel independently to their schools and workplaces and to participate more fully in the life of their communities. It reminds us that the only barriers against people with disabilities are discriminatory attitudes and practices that our society has too often placed in their way. As we observe White Cane Safety Day, let us recall the history of the white cane, its emergence as a tool and a symbol through history; a staff of independence. Let us also recall the events that have permitted us to celebrate October 15th as White Cane Safety Day."

Learn More About the White Cane

What Type of Cane Should I Use?

How Do I Learn to Use a White Cane?

Does the Cane Have to Be White?