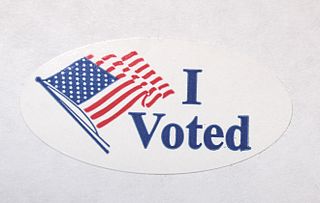 Yesterday, I voted, and it gave me a kind of high. I did it. I got it done. No more indecision, although there was none for me, where the presidency is concerned. But now I can skip any newspaper articles suggesting to me which way I should vote. I no longer have to sit through televised arguments. I don’t care what they are saying about any of the candidates. It’s a done deal, so leave me alone.

The ADA voting machines have been around for several years, and I can recall the joy I felt the first time I used one. For the first time, I didn’t have to take anyone into the booth with me. It got a little crowded in there with a democrat, a republican, me and my guide dog. For the first time, I was allowed the privacy of anyone else. A pleasant voice reads aloud all the candidates and issues. Differently shaped buttons help you navigate through the ballot. You wear a headset, and the screen goes dark when the headsets are plugged in. It’s the greatest breakthrough for blind voters. For voters who are partially sighted, you can opt to leave the screen on while using the audio feature.

When we arrived at a former department store which has been the venue for early voting for several years, the parking lot was full, and we were afraid we would have to stand in a long line anyway. The place was packed, but the workers were so efficient that there was no wait at all. Of course I had the usual moments of irritation when they wanted to speak with my friend instead of me, but a quiet reminder to them that if they were talking about me, they should talk to me seemed to do the job. And there was some confusion on how to set the machine for audio use, but it only took 2 workers and a couple of minutes, and I was in business. After I was sitting for several minutes at the machine, one of the workers asked my friend if she thought I was having problems, but she explained to them that it takes me longer than the typical voter, because every word is read aloud, and you have to sit through it all before you can vote. Then it makes you review all the choices of candidates and issues, whether you want to or not. But I’ve learned that I can speed through that process by just pushing the down arrow quickly through the ones I had no opinion on. I don’t vote for people I have never heard of.

Independence Is a Wonderful Feeling

It was a happy feeling to push that “vote” button at the top and here the little beep. I did it, and I was done with this year’s election. Now I just have to plan my victory party when the results are confirmed.

Actually, the real reason I wrote this post was that I wanted you to see the darling picture of Dora, waiting patiently for me while I voted. Isn’t she adorable? 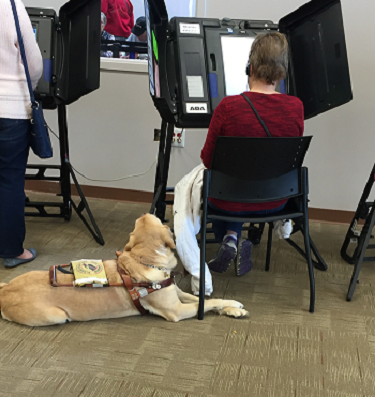 Stay tuned next week for Empish Thomas’s post on voting.

Research Navigator: Counting and Being Counted! Voters with Vision Loss in the 2016 Elections

Voting as a Blind Person with Privacy and Independence