Editor’s note: Are you thinking about traveling this holiday season? Utilize your orientation and mobility skills to experience the holidays around the world. VisionAware peer advisor, Maribel, shares the festivities in her city in this excerpt from "The City on Top in the Land Down Under." This blog was originally posted on Maribel’s travel blog, Touching Landscapes.

A Postcard from Melbourne

The continent of Australia may be physically distant from the rest of the world, but Melbourne is a hub of activity: there is always something going on in the areas of arts and culture, film, music and theater, fashion and design, multicultural food and wine festivals, international sport tournaments and fun-runs, flower shows — one could say, the world has become our oyster. Come and take a visit to the south-east of Australia as a virtual postcard and discover this vibrant city. 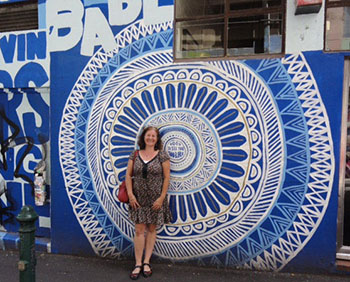 In the very heart of the city is Federation Square, Melbourne’s favorite public space. Tourists and locals alike enjoy a lavish array of cultural facilities such as music events, multicultural and environmental festivals, or as a popular meeting point at any of the many bars, cafes, restaurants, and galleries tucked away under its striking design.

When one walks across the gently undulating paving of the outdoor terraces, the visitor may be entranced by its textural design. Thousands of ochre-colored sandstone blocks that originated in the soils of Western Australia, have now settled into our foundations as part of this urban artwork intended to invoke images of the great Australian Outback.

Federation Square Atrium is home to the Kirra Glass Gallery, one of my most favorite places to visit. The Ian Potter Center is also here — an art gallery housing an Australian collection of artwork and nearby is the Melbourne Visitors Center for all information required when in town.

Getting Around Is Easy

Catch the city-circle tram that will take you around the streets of Melbourne and listen to the recorded commentary that gives a brief history of the city. Trams have been in operation since 1885: the single-bogie drop-end open Californian carriages became known as the ‘green rattlers’ and some are still in operation today, alongside the latest sleek modern versions.

For a real treat, you can book a romantic dinner for two aboard the Colonial Tramcar Restaurant, a converted 1927 tram decked out for fine dining, the only one of its kind in the world.

Within several arcades tucked away like Babushka dolls, dozens of cafes and restaurants ooze old European charm. I guarantee the heavy aroma of percolated coffee, the rich scent of sweet chocolate, and the overwhelming choice of fabulous cakes will be a temptation impossible to resist.

Not far away are the buskers of the Bourke Street Mall, a vibrant hub of free entertainment. The idea for a pedestrian mall in the heart of the city was a concept proposed in 1964 and it was officially opened in 1983 by Their Royal Highnesses, Prince Charles and Lady Diana.

The locals have a phrase, ‘busier than Bourke Street’ and this pedestrian mall is a real hive of activity with humming shoppers all hunting down a bargain or souvenir.

A UNESCO City of Literature

In 2008, Melbourne was the second city, after Edinburgh, to be recognized as a city ‘pursuing excellence in literature on a local level’ and celebrates her title proudly with a year-round calendar of literary events, writers’ festivals, workshops, and courses devoted to the practice of writing and the sharing of ideas.

Just north of Bourke Street is the State Library of Victoria. The vast expanse of green lawn feels like a luxurious soft carpet that invites one to throw down a picnic rug and enjoy observing the hubbub of city life as it rushes past.

Ring Out the Federation Bells

From Flinders Street Station, if you take a stroll down the bank of the Yarra River, within 500 meters you will find the Federation Bells. This is a unique art installation of 39 upturned bells cast in bronze that are scheduled to ring three times a day with a selection of over 200 compositions. As a responsive musical installation, anyone can compose and submit a tune to be played from anywhere in the world. 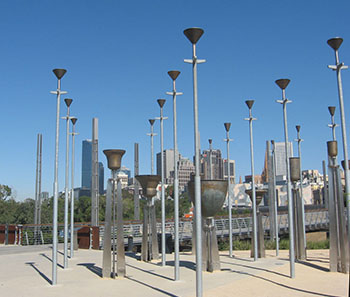 Hugging the winding southern banks of the Yarra River is one of the most beautiful botanical gardens in the world. It has several wrought-iron gates as its entry points that lead deeper into a haven of green and gold, past garden beds and sweeping lawns, peppered with over 12,000 exotic and native plant species.

The citizens of Melbourne and millions of visitors each year can all enjoy the masterpiece of William Guilfoyle whose vision for the city in 1873 continues to be a magical garden to wander under its leafy canopy of serenity.

As we come full circle to bathe in the wealth created by the mid-1800s gold rush era, and remember the first settlers who built the city of Melbourne, the National Gallery of Victoria (NGV) plays an important role in reconnecting the city of Melbourne to our European roots and to the rest of the world.

The NGV not only possesses the largest art collection in Australia with unique pieces from masters like Bernini, Cézanne, El Greco, Monet, Rembrandt and Rodin to name a few, but also hosts the annual Melbourne Winter Masterpieces Exhibition.

And here concludes our tour of Melbourne for surely I must leave some treasures for you to discover: the harbour at Docklands, the Melbourne Museum, Hamer Hall and the Melbourne Symphony Orchestra and Ballet company, the Melbourne Aquarium, the Queen Vic market and wonderful food stalls, Captain Cook’s cottage and other lush gardens of Melbourne, with all the charm of living up to its reputation as one of the world’s most livable cities.