Editor’s Note: This is part of our ongoing series on Laughter is Often the Best Medicine, a series that encourages people who are blind or visually impaired to laugh at themselves and celebrate victories.

Early this week I tried Uber for the very first time. It was more by accident than anything else. I had finished up at the doctor’s office and had booked my trip with my local PARA-transit service. But when the appointment was over I had over an hour to wait for them to come and pick me up. I quickly realized that I did not want to wait that long and so I decided at the last minute to try Uber. In an earlier post I wrote about purchasing an iPhone, I shared that accessing other transportation options was the primary reason. So I pulled up my Uber app and got started. As I sat by the door of the medical facility entrance I began to flick and swipe the surface of my iPhone. Next thing I knew my phone was telling me “driver is 4 minutes away.” I said to myself, “OMG! Wait a minute!” I am not ready to go yet!” 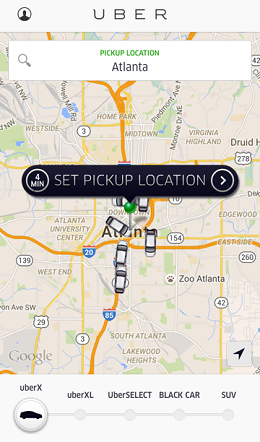 I was trying to back track but it was too late. Then I realized that I better gather my things and get myself outside quickly. There wasn’t much time to spare.

Confusion on Connecting with Driver

Outside others were also waiting for their rides too. I knew that I needed to connect with the driver so he would know that it was me that made the request and not the other people. I remembered a co-worker telling me that you could either call or text the driver but I couldn’t find where it was on the phone.

My mind is saying don’t panic. Time is ticking. My phone is now saying “the driver is 3 minutes away.”

Something told me to tap on the driver’s name and license plate number. Bingo! I found it! 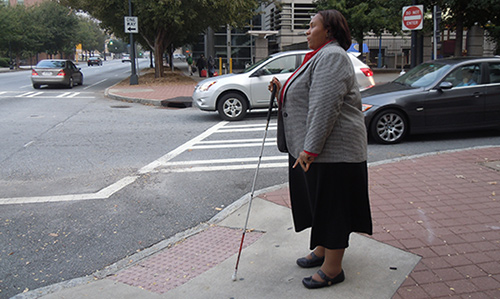 There was a call and text button. I pressed the call button and the phone began to ring. Hallelujah! We talked and I told him who I was; that I was visually impaired, using a white cane, and what I was wearing. He said okay and that he would be there in 2 minutes. Ah, I breathed a big sigh of relief. When he arrived he got out of the car, introduced himself, guided me over and we road off.

Payment Button on Phone Not Working

Once I got settled I gave him the address of my destination. Then I got back on the phone because I needed to figure out how to pay him. In all the excitement I had not put in my destination and completed the trip. I had been told by a co-worker that I could either do it before or after. I saw a payment button and tapped it thinking that would easily do the trick. But after several tries it was not working.

Then I saw this cancellation button and was confused about why it was there. Since I was already in the car and we were moving down the street it was too late to cancel, right?

I had inadvertently pressed the cancel my trip button. Oops! The driver said, “Ma’am, why did you cancel the trip?” Technology is amazing, isn’t it? He had gotten a text message just that fast on his phone. I anxiously said, “I am so sorry, I tapped the wrong button. What do I do so you get your fare?” I was so embarrassed and I didn’t know quite what to do. I told him I was willing to call or email someone on his behalf and explain the situation. After some discussion and thinking things through, he told me that he would contact the company and explain so that they would not charge me a cancellation fee.

All Is Well in the End

I breathed another sigh of relief. I apologized again and told him thank you as he dropped me off escorting me to the front door at work. Besides my figurative bumps in the “road” my first adventure with Uber was very good. I am excited and ready for my next adventure but with a training class first! LOL!

Finding Rides When You Can’t Drive

Finding and Hiring a Driver