“Life is like riding a bicycle. To keep your balance, you must keep moving.” — Albert Einstein 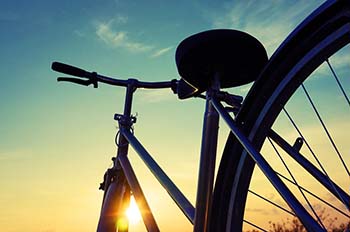 Editor’s note: In the New Year we all make promises to ourselves about coming up with a new weight loss plan or exercising more. Beckie Horter, new VisionAware peer advisor, describes her joy in bike riding and how she does it.

Feeling Out of Balance

To keep moving is not always an easy thing for people with vision loss to do. While we may want to stay active, and may even seek it out, our vision oftentimes interferes and spoils our best-laid plans. I discovered this firsthand after central vision loss left me legally blind in my mid-thirties. Along with giving up driving a car, I also resigned as proofreader for the local newspaper. Then I canceled my gym membership. The result? Frustration and anger over my many losses. I soon realized that not doing aerobics at the gym affected my emotional and physical health. Depression set in. I tried riding a stationary bike at home, but lost interest when I realized I wasn’t going anywhere fast, or slow for that matter. Part of the joy of bike riding for me meant taking in the surrounding sounds and smells, noticing the feel of bike tires on the pavement, and the wind on my face. It was the pleasure of movement. Experiencing different things.

I remembered the freedom that bike riding afforded as a child. Bikes give us our first taste of independence. We get to decide important things: where to go, how to get there, when to pedal, when to stand up or sit down, and when to apply the brakes. Maybe even when to let go of the handlebars. “Oh, the places you’ll go!” said Dr. Seuss.

Yes, bike riding equaled freedom. But with low vision, I doubted that freedom could be mine again. However, because my vision loss occurred gradually over a period of three years, I became used to adapting to less and less sight. For example, I drove a car on the strength of one eye still being 20/20. I read with that eye, then started experimenting with magnifiers. But when my “good” eye lost vision too, adapting on a much larger scale became necessary.

The first spring after I became legally blind, I tried riding my bike in a neighborhood park where there was little traffic. I had to be more cautious, to be sure, but it was doable thanks to my remaining side vision. I couldn’t see far into the distance, but because I was not going fast, it didn’t matter. I saw far enough into the distance and a sweet gift of independence returned! I could once again roll along on the pavement catching the smell of someone’s dinner over a charcoal grill. I could hear the doves calling to each other or a train whistle off in the distance. And the wind messed up my hair.

Before I made this discovery, my husband mentioned getting a bicycle built for two, and someday we might try tandem cycling, but for now I can still master my own wheels. The only catch: I must be careful where I ride. For instance, I would never attempt a busy street. Paved bike trails, often found in state parks, work best for me. I don’t have to worry about car traffic and other traffic (from bikes or pedestrians) is usually light.

Sometimes my husband will wear a bright yellow shirt and go ahead of me on the trail. The color stands out and gives me a familiar “target” to follow. Then after I’ve been on the trail a couple of times, I remember landmarks. For example: Here comes a wooden bridge. Beach up ahead. There’s a parking lot to my right. Thankfully, my sense of direction remains good despite vision loss.

Riding a bike is more than just fun, it’s healthy! While mind and spirit benefit from the stress relief of being outdoors, the body benefits as well. Cardiovascular systems get a workout as do muscles and bones. And biking is easy on joints while preserving cartilage. Throw in reduced body fat and you have a balanced workout suitable for all ages. I sometimes wish I lived closer to the many bike trails our country offers. But for now, I’m content to get there when I can. My northern climate allows for biking about half the year, but I keep a walking schedule year-round as well. Taking the dogs outside, regardless of weather, makes everyone behave better. As I’ve discovered over time, vision loss doesn’t mean an end to activity. It simply means we need to adjust, experiment, and keep moving!

Sports and Exercise with Visual Impairment

Exercise for People Who Are Blind or Have Low Vision

Tandem Bicycling: Tips for Cyclists Who Are Blind or Visually Impaired