Editor’s note: This is the 3rd part of our series on the International Day of Persons with Disabilities. Be sure to read Part 1 on useful tips when you meet a person with vision loss and Part 2, “Speak to Me.”. And stay tuned next week for Maribel Steel’s post on “accepting life as it comes.”

“Relax every muscle right now, or you’ll break some bones,” the voice in my head bounced through my body as I started sliding down the two flights of steps leading to an underground tunnel meant to offer safe passage across the busiest street in Novosibirsk. My fall had happened too fast to stop. Walking quickly homeward, trying to beat the Siberian cold before it could penetrate my reverse sheep skin coat, dog hair knit gloves and fur hat, I had forgotten that only half the width of those steps was habitually shoveled. The rest was like a giant slide of ice and tight-packed snow built up for the four or five Months when temperatures in that part of Russia do not warm up enough to melt the frozen ground cover. My cane slipped first, and instantly after, my feet in their knee-high boots shot out from under me. 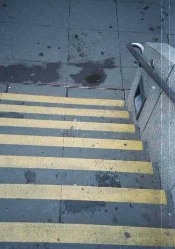 I cannot remember how long it took to hit the bottom, where the sidewalk and its metal water grate were relatively free from winter precipitation. I was too breathless to stand, gingerly checking out my still shaking body and limbs and, thank goodness, feeling no pain. I heard people clomping by, and I wondered, were they ignoring me, or were they just too intent on beating the cold to notice or to want to help? Suddenly a little girl protested shrilly, “But Mama, why can’t I do that? Look, that lady just did it!” I began to laugh so hard at the child’s desire to mimic my great slide that it took me an additional minute or two to get up. The laugh gave me just the jolt I needed to go on.

The Daunting and the Droll

Being blind in Siberia is like that ­ a mix of the daunting and the droll, the frightening and the fantastic. I went to Russia in 1990 as the first disabled guide on a government-sponsored citizens exchange exhibit that had begun over thirty years earlier. Moved by the kindness amidst hardship that surrounded me and convinced that I could contribute more to Russian life than to American society, I determined to stay on, and I lived in Russia and Central Asia for most of the next decade. I found tremendous support in my goals of journalism and teaching, free as employers were from fears of law suits or crazy insurance rates if they hired me. In interviews I sensed the respect of people who saw me first as a bilingual, hardy traveler interested in their life, my blindness being marginal compared to what I could contribute to their schools or businesses.

In 1994 I began working on an international disability project to unite wheelchair manufacturers and users on designing chairs adapted to the rigors of local conditions. I tried to promote barrier free design and medical education alongside my mobility impaired colleagues, many of whom had not been able to visit a doctor in years because of accessibility issues, and some of whom were house bound for months when winter came. Using my own experiences of growing up blind, I tried to address not just the problems at hand, but larger societal issues of discrimination. But my views of “Disabled of the world, unite!” struck an iron curtain when it came to making people of a given disability aware that those of any physical challenge have far more in common than what separates them, especially in how society views them.

After much thought and discussion, I came up with a plan. The Novosibirsk Special Library for the Blind and Visually Impaired was located just a block away from the gym where the wheelchair club commonly convened. Thanks to finding a philosophical soul mate in the library director, and some patient architects and sponsors, we were able to make a joint agreement to widen doors and bathrooms in the library for wheelchair riders’ use for meetings and social activities.

The Importance of Dialog 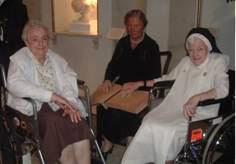 When library users who were visually impaired or in wheelchairs began brushing sleeves, they started discussing their day-to-day lives. Through this dialog they discovered that commonly-held Russian beliefs that their disabilities would bar them from gainful employment or from safe travel had created job and social barriers far beyond their real limitations. Those were heady days for me participating in what was by all accounts the first ever cross-disability dialogue organized in Siberia.

When I began to walk steadily homeward again, the wind bit my face as I ascended the steps across the under passage. I could smell freshly baked bread along with the hand rolled cigarette odor prevalent during the early 1990s before commercially made cigarettes got a corner on the market. Suddenly I felt an arm reaching around me from the right, and into my market bag hand were thrust two fat, soft, still warm rolls wrapped in newspaper. “I see you walking this way every day, young woman, and I want you to enjoy these,” a woman said. I began to protest, but she was gone. There I stood, recipient of this random act of kindness. Warming myself over a cup of tea along with those rolls a few minutes later in my kitchen, I mused about that day’s events, which had shown me some of the worst and the best in humanity.