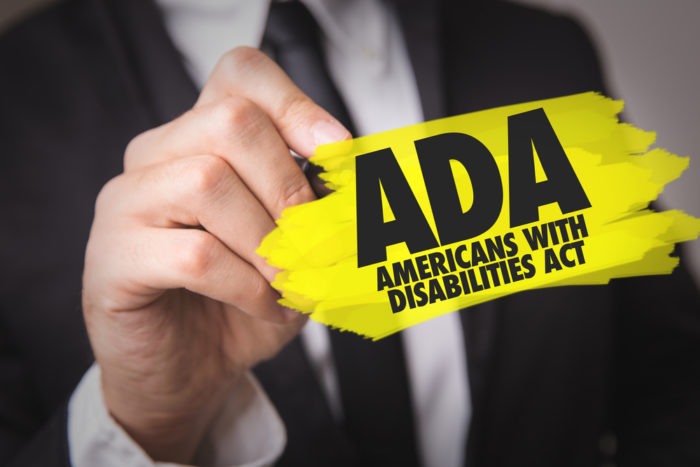 At the time the Americans with Disabilities Act (ADA) was signed in 1990, I recall thinking this legislation was entirely appropriate, “the right thing to do,” an expansion of equal rights. At the time, it was all theoretical for me. I didn’t have any skin in that game to speak of.

Two years later, at the age of 33, an ophthalmologist explained to me that the small spot that developed in my vision was a retinal bleed caused by macular degeneration. This was more correctly diagnosed later as myopic degeneration. Both of these conditions cause slow, but uncorrectible, vision loss. By 2001, after losing a job as a result of my vision loss and having anxiety about it, the ADA became far more meaningful to me. I tried to navigate the employment world with recent vision loss making it more difficult to use the computer as I’d always done, read, try to negotiate alternative transportation, etc.

I didn’t know it at the time, but I was in good company. According to the Centers for Disease Control and Prevention (CDC), 1 in 4 US adults has a disability that affects a major life activity, and by the age of 65, 2 in 5 adults will have a disability. The prevalence of disabilities in our neighborhood, school, or workplace may not be obvious until we consider the statistics. Many disabilities are not visible. For example, unless you asked me to read something and saw the magnification or text-to-speech on my computer while I worked, you’d probably never guess I was visually impaired.

At 30 years old, my first impression of the ADA was that it might help “others” with a disability get a fair shake at a job, a needed accommodation, or remove a barrier. I really had no idea of what a positive impact it might have on all of us, or that I too might one day be benefited by this legislation.

Recognition of the Value of the ADA Slow in Coming

It’s often been pointed out that the accommodations guaranteed by the ADA was initially not well received. Only later, did people begin recognize how these accommodations benefit all of us by making a positive impact on our neighborhoods, schools, and businesses. For example, who would have imagined that 50 years after Ed Roberts, a Berkeley student and wheelchair user, and the “Rolling Quads,” broke up curbs late at night and created their own cement ramps in San Francisco, we would all be using curb cuts in our neighborhoods! Kids on bikes, skateboards and roller blades, parents with strollers, walkers, travelers with suitcases, and yes, commuters in wheelchairs all use the curb cuts that many communities resisted at first and considered an “accommodation.”

Imperative to Support and Maintain the ADA

Thirty years after the signing of the ADA, it is even more obvious how this legislation has benefitted all of us, our communities and workplaces. With so many of us confronting disabilities later in life, it is more imperative today than ever that we support and maintain the integrity of the ADA.

Read about what the ADA means to Empish Thomas, VisionAware peer.