Editor’s note: With tax season upon us, the filing deadline of April 15 is not so far away so the topic of this post takes on even more meaning.

As a person who is blind, I’m often asked, “How do you know that’s a five-dollar bill?” It’s a good question, because in this country, all our bills feel the same. You can feel the difference between a quarter and a nickle, a dime and a penny, but it is impossible to detect the difference between a one-dollar bill and a one-hundred-dollar bill. There are 180 other countries with a monetary system that is accessible to people who are blind. You’d think that the U.S. would already be among them. But, things are slowly improving and you can read more about these developments in another post by Maureen Duffy titled “Progress Update: United States Accessible Currency Project for Blind and Visually Impaired Persons.” 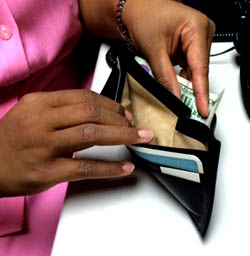 But in the meantime, we who are blind have developed individual methods of keeping our cash organized. There is no one right method, so I’ll tell you about mine. I keep all my ones flat in my wallet. I fold my fives in half from left to right. I use a lot of five-dollar bills for my transportation, so that’s usually all I carry, ones and fives. It makes life a whole lot simpler. However, if I do have a ten, I fold it like a five and then fold it over again.

I fold my twenties over like a five and then down from the top. In this way, I can easily tell which bill I have plucked out of my wallet. The trick is to get them stashed properly in the first place. Here’s where some issues of trust and honesty come into play.

Taking Control of My Money

When I make a cash purchase with a $20 bill, and I’m expecting change that includes a higher denomination than $1, I always ask the person handing me my change to tell me which bills are which. I don’t mind taking a few extra seconds to do this, for two reasons. First, it helps me keep control of my money. Secondly, it reinforces to all the fact that I am indeed in control of my money. Have you ever seen that TV show, “What Would You Do?” One episode was about a blind person being cheated by a store clerk, who handed her the wrong amount of change. He thought he could get away with it, but by-standers came to her aid. If I am ever in doubt, I say, “here’s a twenty.” That way, the clerk can never tell me that I only handed him a one. And if I have accidentally pulled out the wrong bill, my mistake will be noted by us both. Have I ever been cheated? Not to my knowledge. In fact, it is more likely that a clerk will point out that I have handed him a twenty instead of a ten, not the other way around.

Another method I use, particularly when I am traveling, is to keep ones in my right hand pocket and fives in the left. That way, I don’t have to fuss around with digging tips out of my purse. Of course the problem can be remembering which pocket holds which denominations. I think one time, I accidentally tipped a sky cap $10 instead of $2, but that wasn’t his fault. It was just his lucky day. Or maybe he thought I was Miss Money-bags, and I always tip like that!

Writing and keeping track of checks can present more of a challenge. There are check-writing guides for those whose handwriting is legible. They are made of plastic, metal or cardboard, with windows cut out where you fill in the date, the amount, etc. I keep track of my own checks by recording them in a very old piece of technology called a Braille and Speak. I call my bank regularly and check on the status of my account. Automated phone systems are great, but those who are more computer savvy than I can do the same on line. Whether I’m keeping track of pennies or my life savings, the most important thing to remember is to not get lazy and to always be in control.

Keeping Track of Your Cash

If you are blind or visually impaired how do you keep track of your printed money? Do you use a folding technique, accessible wallet, bill reader, or some other method? What do you find to be the best for you and why? Have you heard about the Accessible Currency Project progress to make paper money more accessible? If so, what do you think about it?