Editor’s Note: This is part of our ongoing series on Laughter is Often the Best Medicine, a series that encourages people who are blind or visually impaired to laugh at blunders and celebrate victories.

I have recently had my four top front teeth crowned. The teeth were not done for vanity. It was just time. I was bulimic for thirteen years and the damage to my teeth during those years necessitated the crowns. The problem was, there wasn’t room for the crowns.

What happened the day of the procedure was pretty hilarious. Okay, the seven hour appointment was totally not hilarious but there were elements of humor in the thing. And the follow up visit was definitely hilarious!

So Here’s the Rest of the Story

So, two years ago I put in my first set of Invisalign trays. Invisaligns are the 21st century version of braces. The entire process is fascinating but that’s a topic for another post. Success with Invisaligns rests largely with the compliance of the patient. The trays have to stay in twenty-two hours per day. I could take them out only to eat or drink something other than water. Then I had to brush my teeth and pop them back in.

I was ruthless in my compliance with this regime. I got new trays, a little tighter than the ones before, every other Wednesday. It became the joke between my husband and me that I’d need to rip the new trays out of my head by the end of the day and indulge in an adult beverage as a means of “medication” for having endured the “new Invisaligns” day.

I Finally Get My Crowns

The day finally arrived when Dr. Goodspeed did the crowns. He did them all at once, in a single appointment. When Dr. Goodspeed does a procedure he wears a light on his head. My dog guide, Kismet, has this thing about lights. She attacks them. If she sees sunlight or a flashlight shining on a wall or on the floor she pounces. I knew this would be a long appointment so I brought Kismet’s soft crate with me. A soft crate is collapsible and mine can be slipped in a carrying case with handles and a shoulder strap. 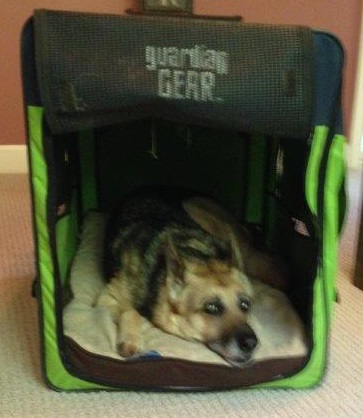 Kismet in the Dog House

Kismet loves her house. Once I got it set up she dove in, turned around and smiled benignly at all of us. “Good,” I thought. “She’ll just stay right there and I won’t have to worry about her. Then Dr. Goodspeed turned on his light. Kismet let out a loud bark and pounced. Sighing, I got up and stuffed her back in her house and zipped her in. On came the light. “Woof.”

The Light Comes On, Kismet Has To Move

I rolled my eyes and asked Dr. Goodspeed’s assistant to drag crate and dog to a place from which she couldn’t see us. Kismet grumbled but soon settled down and spent the rest of the appointment doing her clever impersonation of an angel.

My new teeth look spectacular and it feels so good to have put the physical damage of my long ago problems with food behind me for good. 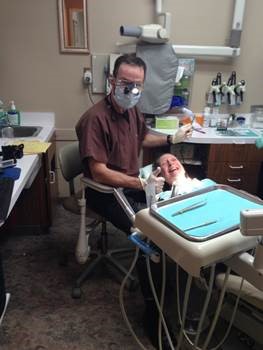 Me: “Will you be using your light tomorrow? Should I bring Kismet’s house?”

Dr. Goodspeed: “Yes, I will use my light. Appointment will be about an hour. Your call if you want to bring house.”

I set up Kismet’s house, popped her in, and zipped her up. Turns out, there wasn’t much that needed doing. Just a little smoothing of my teeth that had the Invisalign attachments, some photographs, and I was good to go. I ask, “Are you done using your light?”

So I collapsed the house and slipped it in the carrying case.

What the Heck Was That?

By now Dr. Goodspeed was in the room across the hall with another patient. I stood, chatting with the folks who had become my friends with Kismet curled up at my feet, apparently dozing. Then, across the hall and in the other exam room, Dr. Goodspeed turned his head and his light shone on the wall. In the blink of an eye Kismet was outta there like a shot. She zipped across the hall and pounced on the light. Sigh. Dashing into the other room I grabbed my recalcitrant child. As I left the room the other patient was heard to exclaim, “What the heck was that?”

Does Your Dentist Offer This Service?

I have had three dogs from Seeing Eye, dog guide training school, and they have all behaved well in the dentist’s office. Each dog would guide me into the examining room and lie down in the designated corner during my appointments. Whether I was having my teeth cleaned or having a crown inserted my obedient pups would dutifully lie in the corner, their eyes focused just on me.

And Then Comes the Storm

As my last dog, a beautiful golden retriever named Wilkes, got older, he became more and more fearful of thunderstorms. When you live in Florida, storms can be an every day occurrence in the summer. My beautiful Wilkes’s favorite places to be during storms were either under my desk or in my lap.

And The New Dental Service Is

One day the hygienist was well into the process of cleaning my teeth, when the sky burst open with a typical summer downpour. Lightning flashed, thunder crashed, and rain beat on the office roof in hurricane force! Yes, of course, my dutiful dog forgot about his duty and wanted in my lap. Then the front desk receptionist, Shana, appeared at the door and offered to “doggie-sit.” I suggested that she let Wilkes lie under her desk. At last when my teeth were clean, I found Shana and Wilkes under Shana’s desk and, yes, Wilkes was in her lap! Wonder how they coded that service?