Editor’s note: This month is Cataract Awareness Month. Be sure to read this post and all the other important information mentioned in this post about cataract surgery and what you need to know. 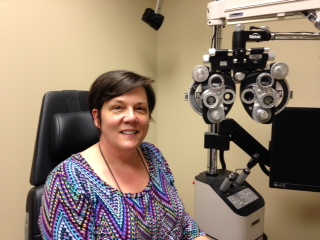 I have Retinitis Pigmentosa (RP) and two years ago my retinal specialist noted on a regular checkup that I had developed cataracts on both eyes. The cataracts were sitting right in the center of my only remaining window of vision. They were the type of cataracts that are commonly found in RP patients. About 50% of patients with RP develop them.

My doctor explained that post sub-capsular cataracts or PSCs are located on the backside of the natural lens and the pouch which holds the lens and they tend to grow quickly. She recommended they be monitored until they caused a significant change in my vision.

Problems with Close Up Tasks

It was not long before the cataracts were beginning to affect my visual function and I was having trouble with close up tasks such as reading. Everything appeared dull and clouded as if I had blobs of Vaseline in my eyes. My biggest struggles were reading the computer and my iPhone which I depend on heavily and spending time outside in the sunshine. I decided to talk to the doctor about cataract surgery.

Investigating the Risks Involved in Surgery

Cataracts in and of themselves are not a big worry and the surgery is one of the most common and successful procedures done today. But when they appear along with RP or other eye diseases, it is more complicated. Since patients with advanced RP depend on their remaining central vision, there is much to be gained from removing cataracts. But no surgery is without risks. As a nurse, I knew it was important to learn all I could about cataract surgery and consider my options carefully. I began to do a bit of research.

I wanted to know what the risks were of losing the rest of my vision and whether I could expect improvement in my vision if I had the surgery. I visited VisionAware’s section on cataracts and the cataract message board. Then I talked to my optometrist and low vision specialist. We discussed my eye history, and my hyper-myopia and how that may increase risks. In the end, he said he believed I had more to gain than to lose in doing the surgery. He referred me to a cataract surgeon who was well-known to him and who seemed best suited to my case.

A Good Candidate for Cataract Surgery

By the time I met with the surgeon for a consult, I was well-informed of the risks of this procedure. My goal was to preserve my ability to read my computer and iPhone with my low vision devices for as long as possible. The surgeon examined me, ran tests and took measurements. He declared that he believed I “was a good candidate for the surgery and would do well.” My surgeries were scheduled two weeks apart. I was sent home with a packet of instructions and prescriptions for eye drops to be started the day before surgery.

Deciding on the Type of Intraocular Lens

The morning of my first procedure, I felt nervous about having someone cut on my eye, but I was also confident in my doctors and in my decision. They all discussed my case and had my best interest in mind. There was a lot of discussion about which intraocular lenses would be best and what the prescription correction should be.

Previously, I wore contact lenses that corrected my vision to an intermediate focal point, allowing my low vision devices to work well for me. When I want full correction for distance, I add a pair of glasses to complete my prescription. To read or do close up tasks, I use prism magnifying glasses. With just my contacts, I am able to work on the computer (with Zoomtext) comfortably and do most daily tasks without any glasses. This has worked very well for me. Based on the pre-op testing, intraocular lenses that correct astigmatism in the same prescription as my contact lenses were chosen for the best vision outcome. I did have to pay out of pocket for this type of lens (toric) as it was not covered by my insurance.

The procedure went smoothly and was over quickly. I was given light sedation and was aware of a few sensations, but had no pain. At home that evening, my eye was scratchy and my vision was very blurry. By morning, it was comfortable and my vision was already clearing up. I visited my local eye doctor the next day for my first post-op check. The lens was in good position. There was some swelling which was to be expected and I did have an increase in my eye pressure. So the doctor said he would monitor that. 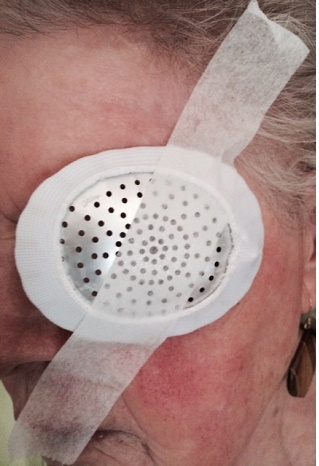 The Importance of Following Post-Op Instructions

The next two weeks, I followed the post-op instructions vigilantly which included administering several eye drops on a schedule, wearing eye shields to protect the eye, and limiting physical activities as instructed. I had several more visits to the doctor for eye pressure checks. I was told this can happen due to swelling which blocks the drainage system in the eye. It is usually temporary and should resolve with healing and the medications.

On the morning of my second eye surgery, my eye pressure was too high in both eyes. I was immediately given eye drops to bring it down. The procedure went without a hitch, just like the first one. Within a couple of days, I was reveling in how much clearer my central vision became. I was so pleased that the gauzy film was gone, the glare improved and colors were crisper. With both eyes now corrected and working together, I was once again able to read my computer and iPhone. A few weeks after surgery, I was reading 2-3 additional lines on the charts, which was very exciting.

It has been three months since my cataracts were removed. My intraocular pressures are still elevated and I am taking glaucoma eye drops. The doctors say I am what they call a “steroid responder” and this is why my pressures shot up. They believe the pressure problem will resolve itself with time and I will be able to come off the eye drops. Of course, this was an unexpected outcome and there is cause for concern. But I am very happy with the improvement in my vision. I feel as if I have dialed back time and got some vision back! And when you do not have much to start with, every bit of improvement can make a difference.

VisionAware has a great deal of information about cataracts on our blogs and in the eye condition section. Here are some highlights:

How is Cataract Surgery Performed

Role of Lasers in Cataract Surgery

Readers Want to Know When to Have Cataract Surgery

From Cataract to Accomplishment