Editor’s note: In honor of Vision Rehabilitation Therapist Appreciation Week, we are publishing an article about Cardelia Cunningham, VRT, retired, and former employee of the Alabama Department of Rehabilitation Services. Ms. Cunningham epitomizes what the vision rehabilitation therapist is all about as a dedicated, hard-working individual who fulfilled her goals despite many adversities and who inspires others to take up the work. This article was originally published in the Summer 2017 issue of DIALOGUE Magazine, copyright 2017 by Blindskills Inc.

Cardelia Cunningham: She Keeps On Overcoming

Cardelia Cunningham is no shrinking violet. She has overcome numerous challenges since childhood and has somehow bounced back from each one. She battled with vision loss for the majority of her childhood, successfully took on college after 20 years as a single mom, earned success in her chosen field, had to give up that career because of poor health, and that’s only the beginning of her story.

She credits her faith in God with helping her to overcome all of these challenges in her life. "If Jesus is my partner, how can I fail?" 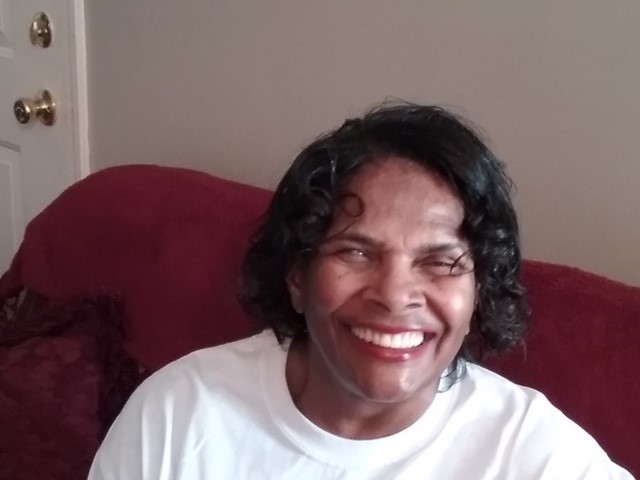 Cunningham has lived most of her life in Florence, Alabama, a mostly rural community in the northwest part of the state near the Tennessee border. She began to lose her vision gradually when she was in the sixth grade. By the end of her teen years, she was completely blind. She was diagnosed with sarcoid uveitis, which causes inflammation in the middle of the eye, called the uveal tract. The uveal tract contains veins and arteries that transport blood to the parts of the eye that are critical for vision.

"I was the only one in my family with the condition," she said. "The doctors didn’t really know where it came from or how I got it." The condition was very painful, and her family had little to no medical insurance for treatment. She recalls that she probably could have gotten more assistance but her father was a proud man and wouldn’t accept it. She made a decision long ago not to dwell on that and to move on.

Cunningham was determined to go to school and brought a "homemade heating pad" with her. During class breaks, she would go to the bathroom and run hot water over a washcloth to place on her eyes to relieve the pain. Although she had no accommodations, she graduated from high school in 1972.

Raising a Family On Her Own Without Vision Rehabilitation Services

No one raised the subject of college with her, so she mistakenly thought that blind and visually impaired people could not go. After high school, Cunningham got married and began to raise a family. The marriage was short-lived, and she quickly became a single mom raising her two sons on her own.

Cunningham managed the best way she could without vision rehabilitation training. She recalls that she had no mobility training (travel skills) at all. "I had no clue how to cross the street," she said. "I would walk as much as four miles to get somewhere because we had no public transportation."

Going to College and Becoming a Social Worker

It was not until 20 years later when her sons were in college that Cunningham was approached about going to college herself. She says she was afraid because she had never heard of a person with vision loss attending college. Her vocational rehabilitation counselor encouraged her and provided mobility instruction from her home to the University of North Alabama.

Now armed with white cane travel techniques and accommodations for classwork, she built up her skills and self-confidence by walking to school every day. "It was a good experience with my classmates and professors," she said. "They were helpful, and I made a lot of friends." She also came away with a degree in social work.

Getting a Job with the Alabama Department of Rehabilitation Services

Before finishing college in 1996, Cunningham met her second husband, and they got married. She had found a job in Decatur, Alabama, but it was 50 miles away—too far for her husband to drive her. She was able to make a carpooling arrangement with a person who lived nearby. That enabled her to make an employment connection which lasted for the next 19 years. She worked as a rehabilitation therapist for the Alabama Department of Rehabilitation services until illness forced her to retire in 2016.

Getting Her Master’s Degree in Vision Rehabilitation Therapy

During those years, she took advantage of a fellowship at Florida State University to earn a Master’s in Vision Rehabilitation Therapy in 2003. Eventually, she was able to transfer from the Decatur office to the Muscle Shoals office making her commute to work only five miles.

"Teaching and seeing people change right in front of you is what I loved most about being a VRT," Cunningham reflected. "It is amazing to see that. Because I am blind myself, I know what it feels like to be at those progressive stages of vision loss." But Cunningham also notes the challenges of being a VRT: "What I use to dislike is the casework, the paper and paper and paper; but it had to be done, so you get it done."

Becoming a Go-To Person for Information and Resources

As a Vision Rehabilitation Therapist, she managed a heavy caseload, which covered five rural counties, conducted training classes at the center, launched five support groups, and served as an active member of various professional associations, such as the special education advisory council. She also became well known in the field and, through word of mouth, people would contact her for information, resources, and assistance. "The field is so dynamic. You have to be in constant learning mode; otherwise, you won’t be as effective as a teacher," she said. "You have to suggest things to your centers and consumers, and you have to keep up with what is happening in the field."

Diagnosed with Kidney Failure and Getting a New Kidney

In 2014, she was diagnosed with kidney failure. While still working, she started dialysis. "The heavy caseload was just a part of the job. Funding was tight, and my illness caused me to not be as effective as I could have been," she recalled.

During the first month of her dialysis treatment, a remarkable thing occurred. Her paratransit driver, who had just started with the company, offered to be tested as a donor when she learned of Cunningham’s need. The test proved a match, and today, Cunningham has a new kidney.

Now, Cardelia Cunningham is moving toward her next career goal of launching a nonprofit business. Her organization is called Cunningham Consulting: Low Vision No Vision. She wants to offer services to people who are new to vision loss—services that focus on adjusting to vision loss, low-tech skills, and independent living skills. She also wants to do public education training and workshops where she can teach the general public how to interact with people who are blind.

Cunningham is filing for 501(c)(3) status and feels confident that her business will be successful. "I have been networking and made many connections over the years," she explained. "Also, because I am a licensed social worker and VRT, I can locate resources and services for people."

She says for those who are interested in becoming a VRT, the need is great, and there is much opportunity. "There is an influx of baby boomers, and we are working in a shortage right now. We need people that care, and people that want to help blind people improve their lives because the need is out there."

How I Became a Vision Rehabilitation Therapist