As many news outlets have reported by now, actors Warren Beatty and Faye Dunaway announced the incorrect Best Picture winner at the 89th Academy Awards ceremony on February 26, 2017. Mr. Beatty opened the envelope and Ms. Dunaway read the winning picture as La La Land instead of Moonlight, the actual winner.

How did this happen? Many explanations have been advanced, including human error by a tweeting and distracted Brian Cullinan, the PricewaterhouseCoopers accountant who handed the incorrect envelope to Warren Beatty backstage.

Another possibility, however, is that the envelope – which was redesigned this year – was difficult to read, due to a combination of poor contrast, poor print legibility, and insufficient lighting backstage.

Here’s more about that possibility from Was Oscar’s best picture disaster simply the result of poor envelope design?, via the Los Angeles Times:

One of the most epic mix-ups in the history of the Academy Awards could have been the result of a faulty envelope design as much as bad backstage distribution.

A new envelope design — red with the category embossed on the front in gold lettering — could have been a factor.

This was the first year since 2011 that Marc Friedland Couture Communications of Los Angeles did not design and print the Oscar envelopes. Said Friedland, “I can’t say our envelope would have prevented it, but we put measures in place to make it as foolproof as possible, such as really legible, very big type.”

Friedland’s envelopes were gold, affixed with large ecru labels stating the categories in a proprietary typeface that provided contrast and legibility. This year’s new cards, with the lower contrast gold printing on red envelopes, could have been hard to read in the lighting backstage.

“We always were concerned about the fact the presenters could get them out of the envelope easily and that they were easily legible,” Friedland said. “I think it’s … a flaw in the design and human error that contributed to this.”

This is the gold Oscar envelope from the 2016 ceremony. The award title is in large print, with good contrast between the print and background: 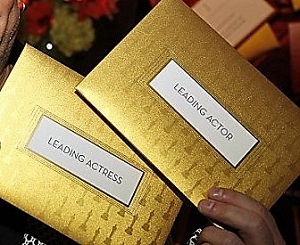 This is the red Oscar envelope from this year’s ceremony, held by presenters Warren Beatty and Faye Dunaway: 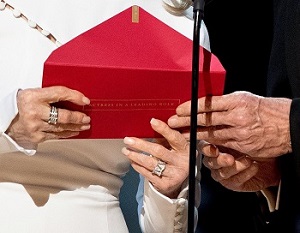 This is a close-up view of this year’s red Oscar envelope. Note the very poor contrast between the deep red envelope and the burnished gold print: 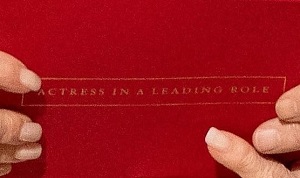 What the Academy Awards Can Learn from VisionAware About Print Legibility

Use Large Print and Strong Contrast

The standard font size for large print is 18 point. When advising your employer, senior center, or church, for example, on how to make brochures, newsletters, schedules, menus, programs, and other materials accessible for you, the best size type for these items is generally 18 point, which can be produced by regular printers.

It’s also best to use bold black print on a matte (not glossy or shiny) white or cream background and limit the use of graphics. Also, avoid using italics or all capital letters. Generally, lower-case lettering is easier to read.

Use plain, simple, “sans-serif” fonts, such as Arial or APHont (available online through the American Printing House for the Blind).

Serifs are details on the ends of some strokes that comprise letters and symbols. A typeface with these strokes and details is called “serif.” A typeface without these details is called “sans-serif,” from the French “sans,” meaning “without.” In many cases, the use of fonts with serifs can reduce the readability of print for people with low vision. Therefore, sans-serif fonts are the recommended print options.

This is an illustration and comparison of serif and sans-serif fonts: 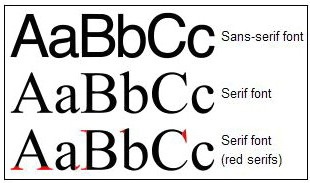 You can learn more about large print and print legibility at Getting Started Kit: Tips for Making Print More Readable (PDF) and Using Large Print at VisionAware.org.

There are a number of different types of light, each with its own characteristics. When you go to the store to purchase a new lightbulb, it’s helpful to pay attention to three terms that you can find on every lightbulb box:

Incandescent light emphasizes the red/yellow end of the visible light spectrum, which is closer to natural sunlight. The light from an incandescent light bulb is also very concentrated. That makes it best for “spot” illumination on close work, such as reading, sewing, and crafts. It is not recommended for overall room lighting, since, like sunlight, it tends to create glare spots and shadowy areas.

Please note: At the end of 2014, the United States phased out production of all incandescent bulbs. Until supplies run out, these bulbs will remain on store shelves alongside the energy-saving alternatives that are replacing them.

Fluorescent light and CFLs produce less heat, use less energy, and are more cost-effective than incandescent bulbs. Fluorescents are usually recommended for overall room lighting because they don’t create glare spots and shadows. A CFL is a compact version of a fluorescent tube that is curved or folded to fit into the space of a standard bulb. Look for CFLs with a K rating of around 4,200 but under 5,000.

CFLs have some drawbacks, however:

LED bulbs produce minimal heat, are very energy-efficient, and achieve full brightness instantaneously. The energy-producing part of the light, the diode, is encased in a hard plastic cover that looks like a standard bulb and will not break easily. LED bulbs do not contain mercury, have a life expectancy of 50,000 hours, and work best for concentrated lighting on close work in a flexible-arm lamp with a shade that directs the light downward. They are not recommended for overall room lighting. Look for LEDs with a K rating of around 4,200 but under 5,000.

Some people prefer halogen light because it is brighter, “whiter,” and very concentrated. It is used in lamps, track lighting, and ceiling fixtures, and it is also available in adjustable gooseneck and flex-arm lamps.

There are some disadvantages to halogen light, however:

This type of lighting contains some combination of CFL, LED, and fluorescent light. For example, some lamps combine CFL, LED, and fluorescent lighting in the same fixture. Some adjustable flex-arm lamps contain a fluorescent “ring” (called a Circline bulb) that surrounds a CFL or LED light. Combination lighting is usually the most comfortable light for everyday activities because it provides a fuller-spectrum light that more closely resembles natural sunlight.

For more information about helpful lighting for reading, you can read Lighting for Reading and view the Better Lighting for Better Sight video series at VisionAware.org.

Are you listening, Oscars? We hope so!