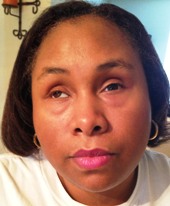 Guest blogger Empish J. Thomas is the public educator for the Center for the Visually Impaired (CVI) in Atlanta, Georgia, where she organizes tours, exhibits, presentations and speaking engagements. She also posts on CVI’s SightSeeing Blog and the CVI community bulletin board. In addition, she talks with potential clients, medical professionals, social service representatives, family members and others about the services that CVI can offer. In her spare time, Empish is a career columnist for Dialogue Magazine and career mentor for CareerConnect® at the American Foundation for the Blind (AFB).

Why I Wear Prosthetic Eyes

When I interact with sighted people, it never dawns on them that I am wearing ocular lenses, also known as “fake” or prosthetic eyes. They look so natural that no one knows unless I tell them, and when I do they can’t believe it. Of course, that is the whole point. Whether it is arms, legs, teeth, hair, or breasts, we are living in a world that socially accepts something on the body that is not real.

I have Vogt–Koyanagi–Harada (VKH) syndrome, which is an autoimmune disease characterized by chronic, bilateral uveitis. As a result, I am totally blind; also, my eyeballs have shrunk, which caused my eyelids to close all the time.

In addition, I realized that wearing sunglasses, in some way, communicated to the world that I was ashamed of my eyes. The point was really driven home after attending a disability presentation called Gawking, Gaping, Staring: Living in Marked Bodies at Emory University. The presentation explored the history of how people with physical differences are treated in mainstream society. The presenter, Eli Clare, shared how we have to “cover up” our differences in order to be accepted. I realized that was exactly what I was doing with wearing sunglasses. That night, the shades came down – both literally and figuratively.

After talking to a couple of friends who also wear ocular lenses, my next step was to call my insurance company to see if the lenses would be covered under my plan. Ocular lenses are expensive and I thanked God for insurance! When I learned that my insurance would cover the lenses, I made an appointment with an ocularist for eligibility and fitting. Since I still had both of my eyes, I learned that I would be fitted for partial lenses that would lie over the top of my eyeballs – much like contact lenses, but thicker and a lot larger and customized to fit over my eyes only. 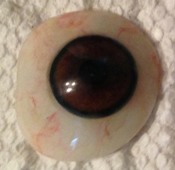 Ocular lenses are made of a durable and moldable plastic – the same kind that is used to make dentures. I joked with my ocularist, “Oh, I can get new eyes and teeth too?” He chuckled as he placed a test set over my eyeballs. My eyes immediately began to tear up and I was crying like a baby. He said that was good because it showed that my tear ducts were working.

I asked my friend who drove me to the appointment how I looked and she said that the ocular lenses were a noticeable improvement and opened up my face. We then decided on a color and both agreed to keep the lenses close to my natural light-brown eye color. I did not think it would be a good idea for an African-American woman to wear blue eyes, but I did consider green for a minute or two!

In a few weeks I returned to pick them up. My ocularist explained how to put them in and how to keep them clean. He asked if I wanted to wear them home, but I was too nervous. I just kept them in my little baggie. 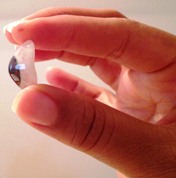 Once I got to work, I was telling my co-workers, “Come look at my new eyes!” I was so excited that I didn’t realize how strange that might have sounded to people! My sighted co-workers expressed how real the lenses looked and how the ocularist had done such a great job. My visually impaired co-workers touched them through the baggie and said that they reminded them of very large contact lenses.

Over the next few weeks I had to work on increasing my tolerance by wearing them for segments of the day until I was able to wear them all day. This required me to work on putting them in and taking them out. I found that task to be very difficult and I got frustrated with it. “Oh, the things we do for beauty!” 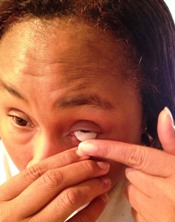 I realized that over the years, my eyelids were not used to being open and my eyes were not used to having a foreign object placed on top of them. It was like I had to learn how to blink all over again. I was about to give up and throw in the towel when a friend who wears ocular lenses told me to keep trying and to be patient.

So one Friday evening, with nothing else to do, I sat on my bed, took a big breath, and tried again. I kept myself calm and allowed my fingers to feel around my eye socket. I found that if I pushed my upper eyelid to place them in it, was easier to do than pulling the lower lid down. I was also thinking that not using my lower lids would help prevent bags and sags under my eyes. After a couple of tries I was able to do it and went to bed wearing my new eyes.

One day when I went to work, a sighted co-worker said my eyes looked funny – as if my pupil was looking in the wrong direction or upside down. I immediately called my ocularist and made an appointment to see what the problem was. After all this work and effort, I couldn’t walk around with my new eyes looking strange!

We discovered that since both lenses had smooth edges all the way around, I could not tell which direction to place them in. He then put a small notch on one side of each lens so that I could touch and feel which eye was which. For my left eye, the notch was on the left side and for my right eye the notch was on the right side. All I had to do was feel for that notch and place it in the correct direction.

It has been almost a year since I have been wearing ocular lenses and I don’t regret the decision. I know that some people might think I am vain and too concerned about my looks, but I have to say that I look and feel fabulous and my confidence has increased! I smile, laugh a lot more, and just feel much better about myself!