"Holy Braille" is a term coined by the University of Michigan’s School of Information for a project directed by Sile O’Modhrain, Associate Professor, to create a tablet of braille cells that will more closely emulate a page of embossed braille on paper. Part of the effort of this team is to transform the mechanism that creates the raised dots on an electronic refreshable braille display from pins moving up and down to a pneumatic system. It is hoped that this design will reduce the cost of this refreshable braille device dramatically from the current cost of refreshable braille.

Some braille displays have entered the market for just under $1,000 but are often limited to 12-20 cells (think of each cell as a character or two of a word). The 40-80 cell displays are easier to read because there are more words per line, but the cost quickly escalates to thousands of dollars for these larger displays.

Ironically, the very technology that was to spell the demise of braille to naysayers is poised to radically transform the accessibility and proliferation of braille. Paper braille takes up much more space than print—a single book in print will take several volumes in braille. Paper braille can get more difficult to read if care is not taken to store the braille properly or by repeated reading over time, and it is more costly to produce than print.

Braille Is Turning Up Everywhere 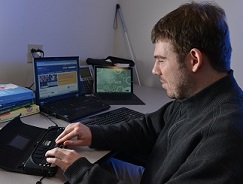 Braille displays have become increasingly capable of working with a wider range of off-the-shelf devices thanks in no small part to Apple, who has been building in braille display support into its iPads and iPhones almost from the very beginning. As a result, iOS devices from Apple, Android smartphones and tablets, Windows 10 operating systems, and even the inexpensive Kindle Fire HD, have braille support built into the on-board screen reader. Braille is more readily accessible than it has ever been because it is nearly in the hands of anyone using one of these devices, whether they are a braille user or not.

Once connected, a braille display works with software to convert the print on the screen into either contracted or uncontracted braille, based on the reader’s preference. For example, an accessible text file or web page will be automatically converted into braille on the refreshable braille display when the file is open. For more literary purposes, readers may download braille from many sources on the Internet such as the National Library Service and Bookshare, which houses large collections. Once the file is downloaded and opened on the electronic device, the braille is readable and editable using the braille display. With a refreshable braille display attached to electronic devices, braille readers have similar access to a vast library of reading material, like anyone else with access to the Internet a screen from which to read the text.

The project closest to breaking the cost barrier remains the Orbit Reader 20, a joint effort in collaboration with Orbit Research, specifically designed to develop a refreshable braille display and keyboard with some editing functionality that is affordable—under $500.

This is not news to anyone following braille technology through articles such as "Orbit Reader 20 Details" and "Braille Technology." The Orbit Reader 20 was announced at least two years ago; production was anticipated a year ago, then moved to Spring 2017. Then we stopped hearing about it except for vague references to "when the Orbit Reader 20 begins production." So, the association with the myth of the Holy Grail grows more appropriate as various projects try to move forward in changing the technology to make refreshable braille and in reducing the cost of production.

An Update from the American Printing House for the Blind (APH)

In a recent call to APH Sales Support to get an update on the Orbit Reader 20, I found out that the Orbit Reader 20 is not shipping yet nor are preorders being accepted. At this time, the Orbit Reader 20 is continuing to be tested, firmware updates are being made and added, and inventory is being built up. It was clear from the conversation that once the Orbit Reader 20 begins selling for $449, there is going to be a considerable demand for the device, and APH and Orbit Research want to be in a position to meet this demand. There was no commitment on a time frame for availability, but it was suggested this had changed from months to weeks.

One of the developments over the past year has been a pilot test of the Orbit Reader 20 and National Library Service (NLS) patrons through the Perkins Library. One might imagine the possibilities of acquiring a refreshable braille display through the NLS, on loan, like the Talking Book player, enabling patrons to download electronic braille whenever and wherever there was an Internet connection. (Please note: this is just this author’s Holy Grail speculation!) Wouldn’t that be a game changer for access to and relevancy of braille? 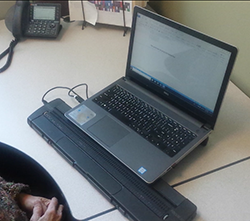 For those who can afford or have access to one of fine braille displays or braille note takers on the market, this access is currently available. Books and magazines may be downloaded and read on the braille display. The NLS offers a list of braille displays for patron reference that can be used to read their vast braille collection.

It should also be noted that the current cost of braille displays reflects more the cost of the technology and the limited market for refreshable braille than an industry trying to make vast quantities of money from braille readers. As newer technology evolves and proves to be as dependable as the existing pin design, we can expect a corresponding reduction in price across many of these manufacturers.

With the prospect of a significant price reduction in refreshable braille displays, the ability to quickly and easily transcribe a printed text into literary braille will put all the pieces together for much greater access to braille. APH has done that by creating and distributing transcriber-quality software for creating braille at no cost! The BrailleBlaster software does not require knowledge of braille to use, and the program allows users to literally drag and drop text to be converted into braille. Once converted, the braille ready file (BRF) can be sent to an embosser to create braille on paper or opened in a refreshable braille display and read. Making it simple for educators, parents, and rehab professionals who are not braille readers to create and distribute braille will greatly increase access to braille readers of all ages and abilities. Learn more about how BrailleBlaster can help students, teachers, and professionals. 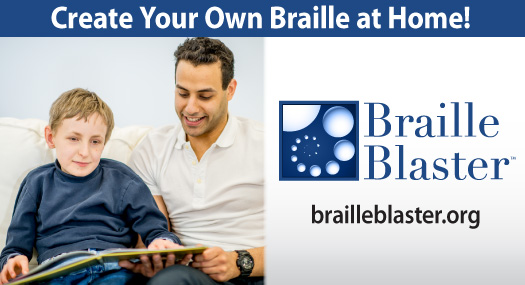 Search for the Holy Braille Continues

There seems to be enough ongoing research, pilot projects, and prototypes out there to warrant a great deal of optimism that some of the very technology that was to be the demise of braille will ultimately invigorate it and make it more available to a wider audience. In the meantime, get yourself ready! Read Deborah Kendrick’s review of the Orbit Reader 20 in AccessWorld or get a copy of the Orbit Reader 20 User’s Guide from APH. When the Orbit Reader is finally available, you can always download Dan Brown’s book Da Vinci Code, and read about the modern day search for the Holy Grail… in braille!

30 Days of Braille, A Series of Blog Posts by Steve Kelley