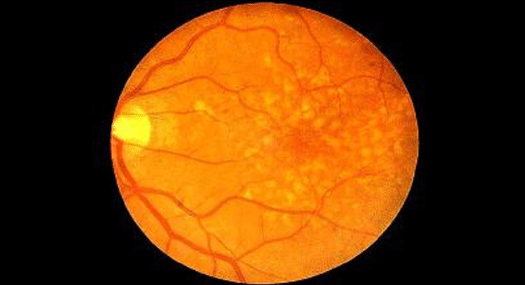 Age-Related Macular Degeneration (AMD) is the leading cause of legal blindness in Americans over 65. There are two distinct types of the disease, both of which result in the deterioration of the macula, the central part of the retina that allows a person to see fine detail. The wet form, which is considered the more aggressive of the two, affects about 10 percent of patients who may be helped by regular injections of anti-VEGF medications. (Note of explanation: The focus of current anti-angiogenic drug treatments for wet AMD is to reduce the level of a particular protein called vascular endothelial growth factor, or VEGF, that stimulates abnormal blood vessel growth in the retina and macula; thus, these drugs are classified as anti-VEGF treatments.)

But doctors have been unable to offer injections, prescribe medications, or perform surgeries that slow the progression of the dry form of AMD. "Aside from a regimen of multi-vitamins, there are no approved therapies for their condition," says Dr. Denis Jusufbegovic, an Assistant Professor of Clinical Ophthalmology at the Eugene and Marilyn Glick Eye Institute at Indiana University. "There is a huge unmet need."

The Marathon of Clinical Trials

Jusufbegovic meets many patients with dry macular degeneration who are hungry for information about existing clinical trials. News of a treatment’s early success can ignite a frenzy of excitement as people scramble to be among the first to receive a revolutionary therapy. But Jusufbegovic advises patients to practice cautious optimism when learning of these multi-phased, long-term scientific investigations. There is no fast track to approval by the Food and Drug Administration (FDA), and positive results are never guaranteed.

According to the FDA’s website, clinical trials are meticulously designed around a study plan, called a protocol, which ensures the integrity of the scientific findings while adhering to strict ethical standards meant to minimize risk to human subjects. Preclinical trials involve laboratory tests and studies on animals before the treatment moves to the first of three phases of the clinical trial. In Phase I, the treatment is tested for safety, side effects, and optimal dosage on a very small group of people. Approximately 70 percent of treatments move to Phase II, which focuses on efficacy. Only about 33 percent of the treatments advance to Phase III, which may involve hundreds to thousands of participants and take up to several years to complete. According to the biotech industry’s national trade group, Biotechnology Innovation Organization, only one out of every 10 drugs that run the gauntlet of a clinical trial is ultimately approved by the FDA.

Most clinical trials are designated as Phase 1, 2, or 3, based on the questions the study is seeking to answer:

For the researchers, drug companies, doctors, and patients who closely watch the progression of promising treatments, clinical trials can be a rollercoaster ride of lofty expectations and disappointment. Jusufbegovic cites the recent failure of the medication, Lampalizumab, which would have been the first medication for geographic atrophy, the late-stage form of dry macular degeneration. The pharmaceutical company, Roche, was banking heavily on its next blockbuster drug until it faltered in Phase III clinical trials when it could not measure up against a placebo. On a positive note, however, medical failures can fuel success down the road as every clinical trial offers new data and insights.

Be Wary of Patient-Paid Trials

By their nature, clinical trials are fraught with uncertainty, so any trial that assures all participants of dramatic and positive medical results warrants serious scrutiny. Jusufbegovic is particularly appalled by the proliferation of Florida treatment centers which enticed patients with AMD to participate in "clinical trials" using stem cell therapy. Riding the wave of media hype around pioneering research at a London hospital in 2015, these scam clinics advertised on websites that recruit patients for legitimate clinical trials.

Stem cell research is highly regulated, but these clinics found a loop hole which permits the harvesting of stem cells from the patient’s own tissue without FDA approval. Jusufbegovic explains, "Essentially the clinics were taking belly fat and injecting cells into the patient’s eyes which caused terrible retinal detachment."

Among the red flags were the absence of ophthalmologists or researchers in what should be an academic setting and the clinician’s unethical insistence on treating both eyes at the same time. Most alarmingly, these predatory clinics were hawking miracle cures for as much as $5,000. A legitimate clinical trial will cover a participant’s medical costs, and some will even offer compensation for time and travel fees. "If paid clinical trials exist, they are to my knowledge extremely rare," says Jusufbegovic. "It is a tragedy that so many educated people were manipulated because they were desperate to try a new treatment."

In exposing the procedures that ultimately robbed individuals of their sight, the New England Journal of Medicine spurred an FDA crackdown on other unlicensed stem cell clinics touting sham cures for a host of medical conditions.

The good news is that the premise behind the bogus stem-cell treatments is rooted in ongoing research which suggests that sight lost to macular degeneration will one day be restored through regenerative medicine. Recently, Jusufbegovic has been closely following the work of Principal Investigators Mark Humayun, MD, Ph.D. and David Hinton, MD, who received a $38 million grant from the California Institute for Regenerative Medicine to investigate CPBE-RPE1, a cell-based treatment for late-stage dry macular generation.

AMD, like many retinal diseases, is characterized by the death of photoreceptors cells that transmit light stimulus to the part of the brain that interprets what we see. These photoreceptor cells rely on retinal pigmented epithelial (RPE) cells to provide nourishment and structural support. Thus, when RPE cells fail, vision deteriorates along with dying photoreceptors. Scientists have already demonstrated that RPE cells can be regenerated from human embryonic cells. According to Jusufbegovic, the innovative feature of the latest therapy is the introduction of a bioengineered synthetic cellular membrane that replaces the damaged Bruch’s membrane, the architectural structure on which the RPE cells rest and grow. In previous experiments, the RPE cells were not given a scaffolding but were instead injected directly under the retina. As this method may have contributed to disappointing results in earlier clinical trials, it is hoped that the synthetic cellular membrane may contribute to the viability of the RPE cells.

In preclinical trials, CPCB-RPE1 was shown to promote the survival of photoreceptors and improved visual behavior in animals. Studies with rats confirmed the safety of the treatment and proved that the therapy slowed the progression of retinal degeneration. CPBE-RPE1 is now being tested on a small group of patients diagnosed with significant geographic atrophy having advanced to Phase I of clinical trials. A second cohort of patients with milder forms of dry macular degeneration will be recruited to complete the first phase of clinical trials once safety has been established.

While Jusufbegovic awaits the results of the CPBE-RPE1 trials, he urges his patients with dry AMD to stick to their multi-vitamin regimens and encourages them to maintain a healthy lifestyle of good nutrition and plenty of exercise. "Whatever is good for the heart is good for the eye," he reminds them. Jusufbegovic is anxious to have the Glick Eye Institute take part in future clinical trials using stem-cell therapy, but he knows that patience and a degree of skepticism must temper the jubilance that accompanies each report of a medical breakthrough. He is, however, encouraged by the speed at which regenerative medicine is advancing. "I’m very hopeful that I will be able to tell my patients about a cell-based therapy for AMD in the near future."

Readers Beware: Learn What to Look for in Clinical Trials

NIH: Clinical Research Trials and You