Human echolocation describes the ability of humans to detect objects in their environments by sensing reflected sound waves from those objects. Now it appears that acoustic scientists are also recognizing the value of sensory – specifically acoustical – input for adults with vision loss.

At the June 2017 Acoustics ’17 Boston conference, a joint meeting of the Acoustical Society of America (ASA) and the European Acoustics Association (EAA), Bo N. Shenkman, an associate professor at KTH Royal Institute of Technology in Stockholm, Sweden, presented a summary of his research in human echolocation, including training applications for persons with adult-onset or later-life vision loss.

ASA is a scientific society devoted the science and technology of sound. ASA also advocates the development of science, technology, engineering, and mathematics (STEM) research and education programs. EAA is a membership organization of 33 European countries that promotes the science of acoustics, its technologies, and its applications throughout Europe and the world.

In his presentation, titled Human echolocation in different situations and rooms, he reanalyzed his previous data and identified specific informational cues that people who are blind or visually impaired use to echolocate, concluding that “…people use not only the pitch and loudness of echoes, which is well established, but also use the timbre, especially the sharpness aspects of timbre [i.e., the quality of tone that distinguishes a particular singing voice or musical instrument.] His research also revealed that blind persons can more easily counteract the “precedence effect,” a phenomenon that occurs when sounds overlap.

According to Professor Shenkman, “A better understanding of echolocation may improve methods for teaching the technique to people who have lost their sight later in life, and yield additional insights into human hearing. Eventually, I hope the research can give a result that can aid blind and visually impaired people.”

Human echolocation describes the ability of humans to detect objects in their environments by sensing reflected sound waves from those objects. Human echolocation is similar in principle to active sonar and to the echolocation employed by some animal species, including bats and dolphins.

This ability is also used by some blind persons to navigate independently within a variety of environments by actively creating sounds (snapping the fingers, making clicking sounds with the mouth and tongue) and then interpreting the sound waves as they are reflected from nearby objects. A person trained to navigate by echolocation can accurately identify the location – and sometimes size – of nearby objects and use this information to travel independently in a variety of indoor and outdoor environments.

An interesting fact: Echolocation used to be called “facial vision” because it was believed that blind persons were somehow able to “see” and perceive objects by absorbing information through a special “mystical” facial sense. Now, of course, professionals realize that such perception is a function of hearing and, by extension, echolocation.

Maximizing Input from the Senses

VisionAware discusses echolocation as a key component of learning to maximize input from the senses and function independently with vision loss:

If you concentrate on what you are hearing, and where sounds are coming from, you will be able to gain more information about your surroundings and begin to feel safer and more comfortable. For example, try this exercise to help you locate an open doorway in your home:

Also, rooms that are varying sizes will sound different from one other. A bathroom, for example, is usually small and contains hard surfaces, such as tiles and porcelain that can cause sounds to bounce and “echo.” A living room is larger, with rugs and soft furniture that can absorb and muffle sounds.

As you approach your entry door, especially if it is located in a foyer, you may experience a “closed in” feeling or sensation. This occurs because sounds are reflected from three very close walls. In a living room or larger space, you’ll notice that sounds suddenly “fall away,” since they take longer to reflect from wall to wall. The area around you will now feel more spacious and open.

Blind Persons Have Been Using Echolocation for Many Years

Although I am always interested in new echolocation research, it’s important to note that many blind persons have been using echolocation, with great skill, for many years.

In 2007, Ben Underwood was featured in a People magazine profile that described his echolocation abilities. Ben was totally blind after retinal cancer claimed both of his eyes at age three.

When he was five years old, Ben discovered echolocation and learned to perceive and locate objects by making a steady stream of sounds with his tongue, then listening for echoes as they bounced off the surfaces around him. He used this skill to participate in running, rollerblading, skateboarding, basketball, and foosball. Ben died on January 19, 2009 at age 16, from the same cancer that claimed his vision. 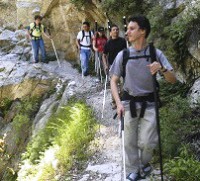 To learn more about echolocation, I recommend contacting Daniel Kish (pictured at left, leading a group of blind hikers), the founder and president of World Access for the Blind, an organization that provides instruction in FlashSonar (echolocation), mobility, and life skills to blind youth and adults.

Daniel, who also lost his vision from retinal cancer when he was 13 months old, has developed a wide array of echolocation techniques and uses those techniques to lead “no-holds-barred” hiking, mountain biking, and wilderness expeditions. World Access for the Blind believes that recreational activities are valuable ways for blind persons to build confidence, improve their navigation skills, and fully participate in society.

More About the Acoustics ’17 Echolocation Research

Excerpted from Exploring the potential of human echolocation, via EurekAlert!:

Bo Schenkman, an associate professor at KTH Royal Institute of Technology in Stockholm, Sweden, [presented] a summary of some aspects of his work on human echolocation during Acoustics ’17 Boston, the third joint meeting of the Acoustical Society of America and the European Acoustics Association being held June 25-29, in Boston, Massachusetts.

A better understanding of echolocation may improve methods for teaching the technique to people who have lost their sight later in life, and yield additional insights into human hearing. “Eventually I hope the research can give a result that can aid blind and visually impaired people,” Schenkman said.

In past research, Schenkman mostly used sound recordings to probe the ability of sighted and blind individuals to detect the source of echoes. By reanalyzing previously collected data using auditory models, he identified some of the specific informational cues that visually impaired people use to echolocate.

The analysis shows that people use not only the pitch and loudness of echoes, which is well established, but that they may also use the timbre, especially the sharpness aspects of timbre.

[Editor’s note: Timbre is the quality of tone that distinguishes a particular singing voice or musical instrument.]

His work shows that, on average, visually impaired people are better than sighted individuals at perceiving the sound quality of two sounds that are close together in time.

Human echolocation shares some similarities with animal echolocation, though people use the skill to compensate for their sight, rather than as an additional sense. For both humans and bats, there is an ideal interval to emit sounds to most effectively echolocate. Humans, however, listen for the sound as well as its echo, while most bats seem to rely on just the echo.

“It’s a byproduct of our hearing system that we can use echolocation, so we’re not as proficient at it as bats,” Schenkman said. However, “I think one can learn much from differences between humans and bats, to compare how the systems work.”

VisionAware will provide updates on this important research as they become available.