Last week, I received the following update on the United States Treasury Department’s long-term and ongoing project to create paper currency (i.e., banknotes) that is independently accessible by people who are blind and/or have low vision.

Excerpted from Nationwide Release of the BEP’s U.S. Currency Reader Program to Help the Blind and Visually Impaired:

The Department of the Treasury’s Bureau of Engraving and Printing (BEP) is accepting and processing applications nationwide from blind or visually impaired individuals who wish to receive a currency reader to identify U.S. currency. Under the U.S. Currency Reader Program, U.S. citizens or persons legally residing in the U.S. and its territories who are blind or visually impaired can obtain a currency reader device at no cost. The currency reader, known as the iBill Talking Banknote Identifier, is compact, easy to use, and provides a response within seconds.

A user inserts a Federal Reserve note into the device, presses a button, and the currency reader identifies the denomination. The device operates on a standard AAA battery and can read U.S. currency in circulation today. The reader can be set to indicate the note’s denomination by voice, a pattern of tones, or a pattern of vibrations for privacy or for users who are deaf-blind. 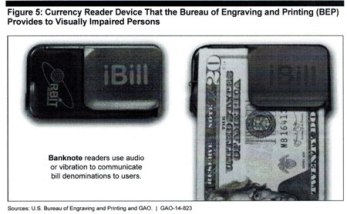 The iBill Talking Identifier in place on a $20 bill.
Source: Currency Reader Program Should Be Evaluated:
Government Accountability Office

The U.S. Currency Reader Program follows the BEP’s successful development and launch of two free mobile applications that operate through a mobile device’s camera to scan and identify U.S. currency: EyeNote, which operates on the Apple iOS platform and can be downloaded for free from the Apple iTunes Store, and the IDEAL Currency Identifier, which operates on the Android-based platform and is available on Google Play.

The U.S. government will continue to research a raised tactile feature for use on the next redesigned Federal Reserve note and will continue to add large, high-contrast numerals and different colors to each redesigned note denomination that it is permitted by law to alter. The process for redesigning Federal Reserve notes is complex and time-intensive. Notes with any new features are not expected to be in circulation before 2020.

In the United States, all banknotes (i.e., paper money) are the same size, shape, and weight, regardless of denomination; in other words, it is not possible to differentiate $1, $5, $10, $20, $50, and $100 bills independently by touch alone. Yes, there are many ways to manage money, including folding techniques and specialized apps, but the basic problem remains: U.S. paper currency denominations are indistinguishable by tactile methods.

In many countries, governments have designed currency – or devised methods – to ensure that banknotes are accessible to all blind and visually impaired citizens: 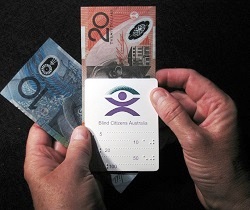 What follows is a timeline of the twists and turns the U.S. accessible currency project has taken since it was first introduced, via a lawsuit filed by the American Council of the Blind in 2002. Yes, it’s longish, but I also believe it provides an excellent example of the multilayered, deliberative processes that inform governmental change.

The American Council of the Blind (ACB) and two visually impaired individuals filed a complaint in the U.S. District Court for the District of Columbia, alleging that the currency of the United States violates the rights of blind and visually persons because they cannot determine denominations of United States paper currency.

ACB stated that the Treasury Department and [then] Treasury Secretary Henry Paulson violated the Rehabilitation Act of 1973, which was enacted to ensure that people with disabilities can live independently and fully participate in society.

A federal appeals court ruled that the U.S. Treasury Department discriminates because it has failed to design and issue paper currency “readily distinguishable to people with poor sight.” By a 2-1 vote, the court upheld a ruling by U.S. District Judge James Robertson in a lawsuit filed by ACB against the U.S. Treasury Department (American Council of the Blind v. Paulson).

The appeals court rejected the Treasury Department’s arguments that accommodating ACB’s proposals would impose an undue burden on the government, and returned the case to Judge Robertson to address the group’s request for relief. ACB proposed several possible changes to U.S. currency, including different-sized bills for each denomination, embossed dots, and raised printing.

The District Court ruled that the Secretary of the Department of the Treasury “violated Section 504 of the Rehabilitation Act,” and required the Secretary to “take such steps as may be required to provide meaningful access to United States currency for blind and other visually impaired persons” in the next currency redesign. The Court also directed the Bureau of Engraving and Printing (BEP) to file status reports every six months, describing the steps taken to implement the Order and Judgment.

The public comment period closed on August 18, 2010 and all comments are available online at regulations.gov.

As part of the public comment process, the BEP hosted two open public forums simultaneously at its Washington, DC and Fort Worth, Texas facilities.

BEP developed an app, called EyeNote, to assist blind and visually impaired persons in identifying U.S. currency. EyeNote, designed for the Apple iOS, scans a bank note and communicates its value back to the user, via image recognition technology. The app is available as a free download on the Apple iTunes Store and a data connection is not required.

[Then] Secretary of the Treasury Timothy F. Geithner approved the methods that the Department of the Treasury will use to provide blind and visually impaired individuals with meaningful access to U.S. currency. The Secretary approved the following accommodations, which are based on feedback from the study and the public:

The Senate Committee on Appropriations issued Senate Report 112-177, which directed BEP to provide a detailed plan, including a timeline, to develop, design, test, and print currency with accessibility features.

The U.S. Court of Appeals denied ACB’s motion to amend the court’s 2008 judgment. ACB had requested that the court direct the Secretary of the Treasury to furnish specific dates by which the currency will be redesigned. ACB had also requested that the Secretary submit a detailed implementation plan describing specific steps to implement three accommodations to provide meaningful access to U.S. currency.

The court ordered the Secretary of the Treasury to continue to file semi-annual reports and to continue to work “diligently and expeditiously” to fulfill its obligations to provide meaningful access to U.S. currency for blind and other visually impaired persons.

The court also ordered the Secretary to inform the court promptly of any additional delays in implementing the next major currency redesign and to be as precise as possible in its semi-annual reports about the timeline for fulfilling its obligations.

In place of Senate Report 112-177, which was not enacted, BEP submitted the plan for Meaningful Access to U.S. Currency for Blind and Visually Impaired Individuals to the Treasury Department and the Senate Committee on Appropriations. The Meaningful Access Plan explains BEP’s progress and path forward in detail.

The Government Accountability Office (GAO) released a report, entitled Currency Reader Program Should Be Evaluated While Other Accessibility Features for Visually Impaired Persons Are Developed, stating that BEP had fallen behind schedule in its plans to produce U.S. currency with raised tactile markings. Concerns included cost, durability of tactile features, and the ability to process tactile bills through currency-counting equipment. BEP estimated that currency with tactile features could be delayed until 2020.

From September 2, 2014 to December 31, 2014, in partnership with the Library of Congress National Library Service for the Blind and Physically Handicapped (NLS), the BEP conducted a four-month pilot program, in which NLS patrons could pre-order a currency reader. The Treasury Department selected the iBill Talking Banknote Identifier, also called the iBill Currency Identifier, from Orbit Research.

A large, high-contrast numeral on a $5 bill and
the iBill Talking Identifier in place on a $20 bill.
Source: Currency Reader Program Should Be Evaluated:
Government Accountability Office

The pilot program allowed the government to test its ordering and distribution processes and gauge demand for currency readers. Approximately 12,000 NLS patrons pre-ordered a currency reader during the pilot phase.

BEP posted the U.S. Currency Reader application to allow the general population of individuals who are blind or visually impaired to apply for an iBill Currency Identifier. The national rollout of the program will begin on January 2, 2015. Through December 31, 2014, NLS patrons are able to pre-order a currency reader through NLS regional libraries.

The BEP begins to process all applications from eligible blind and visually impaired individuals who are requesting a free iBill Currency Identifier. Individuals interested in receiving a currency reader must submit an application, signed by a competent authority who can certify eligibility. Applications are available in English and Spanish.

The BEP encourages organizations that support the blind and visually impaired community to distribute these materials, incorporate the information into individualized communications, or link to the U.S. Currency Reader Program website.

For additional questions or comments about the U.S. Currency Reader Program, you can call 844-815-9388 toll-free or email meaningful.access@bep.gov.

Readers: What is your opinion? Would you like to have accessible U.S. banknotes, or is the banknote reader distribution program sufficient to ensure accessibility for all citizens? We’d like to hear from you.