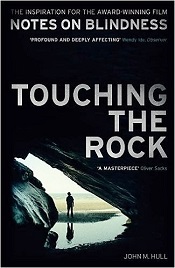 “Vision, in ordinary circumstances, is seamless and gives no indication of the underlying processes on which it depends. It has to be decomposed, experimentally or in neurological disorders, to show the elements that compose it.” ~Oliver Sacks, M.D., In the River of Consciousness

Touching the Rock: An Experience of Blindness

Touching the Rock: An Experience of Blindness, first published in 1990, is the late British theologian John M. Hull’s audio diary and exploration of the many processes (physical, emotional, psychological, and metaphysical) that accompanied his steady, intractable journey through vision loss and into total blindness, where he began to “…take up residence in another world” in which human experience was transformed.

Now, 26 years after the publication of Touching the Rock, filmmakers Peter Middleton and James Spinney have brought Professor Hull’s story to a worldwide audience, via the award-winning feature film Notes on Blindness. The film premiered at the Sundance Film Festival in January, and opened in theaters throughout the United Kingdom on July 1, 2016.

About Touching the Rock

The book opens in the summer of 1983 as Professor Hull begins “sinking into darkness” and concludes in the summer of 1986 when he “touches the rock” of total, absolute, “deep” blindness. In a review in The New York Review of Books, entitled The Dark, Paradoxical Gift, the late neurologist and prolific author Dr. Oliver Sacks called Touching the Rock “a masterpiece”:

There have been many autobiographies written by the blind – narratives at once poignant and inspiring – that bring out the emotional and moral effects of blindness in a life, and the qualities of will and humor and fortitude needed to transcend them. Touching the Rock, John Hull’s account of his “experience of blindness,” is not such a tale: it has no clear beginning, middle, or end; it lacks literary pretension; it eschews the narrative form itself – and it is, to my mind, a masterpiece.

Touching the Rock was not written at a sitting, as a narrative, but was dictated at intervals—at first daily, then occasionally—after Professor Hull, who had trouble with his eyes since he was a boy, finally lost his sight completely during the late 1970s, when he was in his forties. What he provides are observations piercing in their immediacy and clarity …

He describes how it is to cross the street; how it is to find oneself ignored or infantilized; how the memories and images of people’s faces, one’s own face too, no longer updated by actually seeing, become first fossilized, then faint, then disappear altogether; how relationships with one’s family change …

The observation is minute, and it is also profound: everything is pondered, explored, to its limit – every experience turned this way and that until it yields its full harvest of meanings. The incisiveness of Hull’s observation, the beauty of his language, make this book poetry; the depth of his reflection turns it into philosophy.

In 2013, VisionAware’s Mary D’Apice spoke with Professor Hull (pictured at left) about his reactions to the then-in-progress Notes on Blindness feature film. Here’s an excerpt: 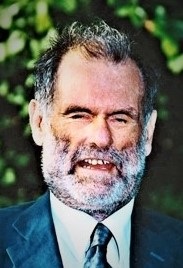 Mary: I understand a company in London is interested in turning those original audio tapes into a feature film. How did the filmmakers find you?

John: A few years ago, some filmmakers [Peter Middleton and James Spinney] were interested in making a film about how blind people travel in snow. They came across Touching the Rock and asked if they could come to my office and make a video about my experiences.

We got on so well together that they called me up later and asked if I still had those original audio tapes. I hadn’t looked for them in 25 years but I did find all of them. We found out that the publisher did not have the copyright for the tapes themselves so the film company was free to go ahead with a project.

You might not know that the BBC made a 50-minute documentary based on Touching the Rock back in 1991. That was difficult because the experience was so fresh. Well, a short documentary is one thing but a feature is different. I said to the filmmakers, “But there is nothing to film! I never sailed the Atlantic as a one-man crew, hand behind my back. I never climbed Mt. Everest.” They told me not to worry. They said all the drama was in those cassettes.

Mary: How are you participating in the making of the film?

John: I am frequently in touch with Peter Middleton, who comes up quite a bit with his collaborators. They like to talk through associations with the past to see if I can conjure up images they could use. I don’t act in the movie, someone plays me. But it’s my voiceover. You’ll hear my voice from the original audio diaries. It’s quite exciting really.

You can read Mary’s full interview with Professor John Hull at Interview with John Hull, Author of Touching the Rock: An Experience of Blindness on the VisionAware website.

An Interview with Notes on Blindness Co-Director/Writer Peter Middleton

Also in 2013, Mary D’Apice interviewed co-director and writer Peter Middleton about his artistic vision, his passion for Professor Hull’s work, and his efforts to bring Notes on Blindness to the screen. Here’s an excerpt from that interview:

Mary: Tell us how you came to make the film Notes on Blindness.

Peter: Back in 2010, we were researching for a short film on the blind and partially sighted experience of snow and adverse weather conditions. Initially we were interested how blind people cope in such conditions. In our search for blind subjects to interview we came across Touching the Rock.

In the book there is a really interesting passage in which he describes how snowfall distorts his world — leveling out contours of his surroundings and removing all navigational markers. Underfoot, the different textures of the ground: grass, tarmac, paving, become indistinguishable — disarming him of his ability to navigate his daily environment safely and independently.

So we contacted John Hull and things developed from there. After making the film about snow we proposed to John the idea of a longer piece using the original audio diaries that Touching the Rock had been based on. In May 2011 we collected from John this dusty box of cassette tapes — 16 hours in total, which hadn’t been played for over 20 years. It’s an incredible archive.

According to John, the process of keeping the diary was a way of coping with the pain of adjustment — a sort of catharsis. He said at the time he would share with the tapes with what he felt he couldn’t burden his family. This gives the recordings a real emotional rawness. We set about transcribing the material and within the first hour or so of listening we knew we had something very special on our hands that would make a really unique piece of cinema.

Mary: How do the diary entries translate into a screenplay?

Peter: Notes on Blindness has a documentary backbone in that the content is factual but we’re aiming at something more cinematic, in which John’s journey into blindness has the audience riding along with him. Our themes are family, his depression and the transformative experience of blindness.

We will be drawing from old photos, interviews, television appearances, and the dialogues John recreates in diary entries. The audience will learn the story of how John went blind through the conversations he has with his young son, Thomas. The script gives his wife Marilyn an active voice, which takes the film out of the subjective (viewpoint) and really broadens the scope.

Mary: In John Hull’s description of his loss of sight, what resonated with you?

Peter: John’s recordings contain much rich, evocative imagery that resonated with us emotionally and intellectually. In particular, we were drawn to his descriptions of the neurological effects of blindness, especially where John reveals that his visual memories are beginning to fade and he is forgetting what his wife and children look like.

He discusses how the recession of the visual memory also has an impact on his sense of self — impacting on the relationship between the body image and his identity — the “horror of being faceless,” of forgetting one’s own appearance — a “dematerialization of his body.”

Following are some of the positive reviews that Peter Middleton and James Spinney’s film has received: