New research from Europe indicates that stepped care – a type of treatment that can offer self-help and “as needed” options for coping with age-related vision loss and depression – can offer promise in dealing with depression and anxiety in visually impaired older adults.

Further, this stepped care approach (detailed below) could lead to standardized strategies for the screening, monitoring, treatment, and referral of visually impaired older adults with vision-related depression and anxiety.

From the British Medical Journal (BMJ)

More about the Study

Excerpted from Stepped care may ward off depression in sight-impaired elderly, via Reuters Health:

For older people with age-related vision loss and at risk of developing depression, a type of treatment in which tailored options are only offered when necessary may help stave off both depression and anxiety, according to a recent European study.

Stepped-care delivery is aimed at long-term disease management that maximizes the effectiveness and efficiency of resources, the authors write in the BMJ. Patients start with lower intensity treatments and only progress to higher intensity interventions if they don’t respond to the first efforts.

Fifteen percent of visually intact older adults have symptoms of depression and around two percent have major depressive disorder, said Dr. Robin Casten of Thomas Jefferson University and the Jefferson Hospital for Neuroscience in Philadelphia, who was not part of the new study.

The researchers studied 265 people age 50 or older in Belgium or the Netherlands who had impaired vision and also some level of depression or anxiety, but less than required for a clinical diagnosis.

Half of the group received usual care while the other half was also enrolled in a stepped-care program involving occupational therapists, social workers and psychologists from low-vision rehabilitation organizations.

The providers began by monitoring patient progress with (a) “watchful waiting” for three months, then delivering (b) guided self-help programs based on cognitive behavioral therapy for three months, (c) problem-solving treatment for the next three months, and (d) referral to a general practitioner if necessary at the end of the program. Patients only moved from one type of treatment to another if they still had elevated symptoms of depression or anxiety.

Two years after the study began, and one year after all four consecutive treatments would have been completed, 62 people in the comparison group, or 46 percent, developed a depressive or anxiety disorder, compared to 38 people, or 29 percent, in the stepped-care group. About a third of people dropped out of the program before the two years were up.

More about the Stepped-Care Model and Protocols for Depression

In the second step, guided self-help, based on a written, digital, audio, and braille version of a self-help course based on cognitive behavioural therapy (with specific vision-related examples and exercises), was offered. The course was divided into seven chapters, aimed at:

Guidance was provided by trained and supervised occupational therapists (n=17) from the outpatient low vision rehabilitation organisations. Two face-to-face contacts took place at the beginning of the intervention (about 60 minutes each contact) and one to three telephone calls (for about 15 minutes each). In the meantime, patients followed the intervention at home.

During each of these contacts, the seven steps of problem-solving treatment were completed:

The primary outcome was the 24-month cumulative incidence (seven measurements) of major depressive dysthymic and/or anxiety disorders (panic disorder, agoraphobia, social phobia, and generalised anxiety disorder). Secondary outcomes were change in symptoms of depression and anxiety, vision related quality of life, health-related quality of life, and adaptation to vision loss over time up to 24 months’ follow-up.

Study answer and limitations: 62 participants (46%) in the usual care group and 38 participants (29%) from the stepped care group developed a disorder. The intervention was associated with a significantly reduced incidence, even if time to the event was taken into account. The dropout rate was fairly high (34.3%), but rates were not significantly different for the two groups, indicating that the intervention was as acceptable as usual care.

Participants who volunteered and were selected for this study might not be representative of visually impaired older adults in general (responders were significantly younger than non-responders), thereby reducing the generalisability of the outcomes. 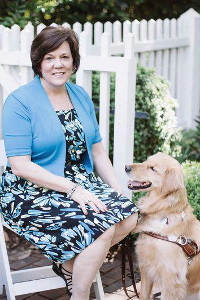 Blindness is a thief of much more than just vision. It robs you of many things and the impact is life-changing. In the early stages of adjustment, loss is its anthem and grief is its mantle. Often, depression is a close companion of vision loss because the losses pile up and overwhelm one’s ability and internal resources to handle them. This was my experience.

In the beginning, I was not even aware of all the losses that would come as a result of my vision loss, which served to protect me. There are many kinds of losses to catalog. There is the actual sensory loss of vision: losing touch with the physical world and missing out on information, colors, and beauty.

Shattered dreams are another significant loss. There are material losses caused by blindness, like the loss of a job, car, home, or relationship. And there are internal, personal losses, such as self-esteem, confidence, social standing, identity, security, and purpose in life. Indeed, blindness is a greedy thief that seeks to destroy – if you let it.

The task is to learn to accept, adjust, cope, and reaffirm life as a person who is visually impaired. The process is a long farewell to who you once were and how you used to do things. It involves re-imagining life as a visually impaired person and reinventing yourself. It is a tall order, but the point is that you can learn to adjust, limit your losses, and reclaim your life.

You never quite finish adjusting. This is also true of personal growth. We are always growing as a result of our experiences. We are always adjusting to what life brings us: new stages, crisis, joys, challenges, set-backs and losses.

Learning that Emotions Come from What We are Thinking

There was a time when I was not “adjusting” very well to my vision loss. I was angry and felt life was unfair. I was afraid of the future. And I was depressed. In short, I was “stuck” and it affected every aspect of my life. Eventually, I sought counseling and began to understand the impact and implications of my vision loss.

I learned about depression; that there was no shame in it, which freed me to address it. Through cognitive therapy, I learned that our emotions come from what we are thinking; negative thinking results in negative feelings. This seemingly simple concept was a key to turning my depression around.

You can read more about Audrey’s emotional journey at From Personal Loss to Personal Growth and the Road to Independence on the VisionAware website.

Make a positive choice to reach out for support and services to enhance your independence and quality of life. VisionAware can help you find resources and connect to services. Consult the Directory of Services for your state. And learn about what others are doing through our blog series on the theme of personal independence.