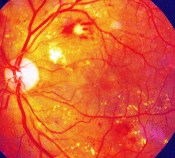 The researchers further indicate that doctors who are treating adults with chronic disabling eye disease “should be alert and sensitive to potential indicators of depression such as sad mood, poor sleep and appetite, impaired concentration, and diminished self-esteem.”

In his Invited Commentary/Response to this newly-published mental health and eye care research, Peter V. Rabins, MD states the case for depression screening more forcefully: “Busy clinicians must balance their focus on the presenting disease of a patient with a duty to detect other co-morbidities [i.e., the presence of two or more chronic diseases or conditions at the same time] that the patient might be experiencing. Because depression affects 25% to 40% of individuals with significant eye pathology, it is reasonable to ask whether ophthalmologists should take specific steps to detect depression and then refer those who have symptoms for further assessment and treatment.”

The Diabetes and Mental Health Research

This new diabetes and mental health research, entitled Association between Diabetes-Related Eye Complications and Symptoms of Anxiety and Depression, has been published “online first” in the July 7, 2016 edition of JAMA Ophthalmology. JAMA Ophthalmology is an international peer-reviewed journal published monthly by the American Medical Association.

More about the Diabetes and Depression Research

Edited and excerpted from Diabetic Retinopathy Linked to Depression: Psychological screening may be indicated in severe cases, via MedPage Today:

Severe diabetic retinopathy [also called diabetic eye disease] was linked to depression, and its presence should prompt clinicians to inquire about a patient’s mental health, according to a new study in JAMA Ophthalmology.

“Our findings highlight that a simple self-report question about mental health history, which is feasible to implement in clinical practice, along with records of vision and diabetic retinopathy status can be used to identify individuals with diabetes who are at risk for poor mental health,” the investigators said.

“The findings presented here highlight that the severity of diabetic retinopathy heightens the risk of depressive symptoms independent from the presence or degree of vision impairment and duration of diabetes. This association likely reflects the long-term burden of managing and coping with diabetic retinopathy in its advanced stages,” [the researchers] said.

“The association between depressive symptoms, diabetes, and diabetic retinopathy is likely to be bidirectional, [meaning that] the impairment and burden of diabetes and its complications can precipitate depression and vice versa, and depression can impair diabetes control through various biological and behavioral pathways,” they added.

Although people with diabetes are more likely to develop cataracts at a younger age and are twice as likely to develop glaucoma as are non-diabetics, the primary vision problem caused by diabetes is diabetic retinopathy, the leading cause of new cases of blindness and low vision in adults aged 20-65:

In addition, fluid can leak into the macula, the small sensitive area in the center of the retina that provides detailed vision. This fluid can cause macular edema (or swelling), which can occur at any stage of diabetic retinopathy, although it is more likely to occur as the disease progresses.

Symptoms of diabetic retinopathy can include: 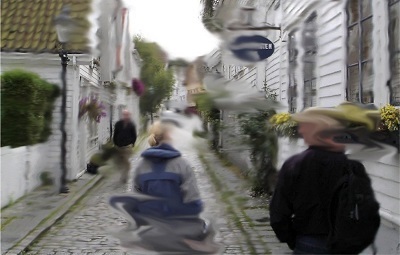 In the same July 7, 2016 edition of JAMA Ophthalmology, in an Invited Commentary/Response entitled Depressive Symptoms in Ophthalmology Patients, Peter V. Rabins, MD, MPH, from the University of Maryland, expanded on the importance of this research for adults and older adults with any eye disease:

Busy clinicians must balance their focus on the presenting disease of a patient with a duty to detect other co-morbidities [i.e., the presence of two or more chronic diseases or conditions at the same time] that the patient might be experiencing.

Because depression affects 25% to 40% of individuals with significant eye pathology, it is reasonable to ask whether ophthalmologists should take specific steps to detect depression and then refer those who have symptoms for further assessment and treatment.

There are several potential approaches to screening for co-morbidities of any sort. One method is to screen all individuals, a second is to screen only those at high risk, and a third is to further assess only those individuals who report the symptom or whom the [doctor] suspects might have the disorder.

This study by Reese [and colleagues] in JAMA Ophthalmology offers useful information in formulating answers to these questions. They found that individuals with moderate to severe diabetic retinopathy were at high risk of having depressive symptoms, while individuals with diabetic macular edema were not, and that it was the severity of the diabetic retinopathy, rather than the severity of the visual impairment, that correlated with depressive symptoms.

However, [because there were limitations in the way the researchers collected and analyzed the study data], their results cannot be used to decide whether universal screening is a more efficient strategy.

[Nevertheless], is it worthwhile to detect depressive symptoms in patients with eye disease? The answer is clearly yes. [Two recent studies of patients with age-related macular degeneration] suggest that clinicians treating individuals with chronic disabling eye disease should be alert and sensitive to potential indicators of depression, such as sad mood, poor sleep and appetite, impaired concentration, and diminished self-esteem. Patients reporting any of these symptoms should be asked if they have been feeling more depressed, and if so, whether they would like a referral to a counselor, social worker, psychiatrist, or psychologist.

More about the Research from JAMA Ophthalmology

Here is a helpful overview of the research, excerpted from the article abstract:

Importance: This study is needed to clarify inconsistent findings regarding the association between diabetes-related eye complications and psychological well-being.

Objective: To examine the association between severity of diabetic retinopathy and diabetic macular edema with symptoms of depression and anxiety in adults with diabetes.

[Editor’s note: A cross-sectional study analyzes a group of subjects at one specific point in time. A prospective study, on the other hand, measures a group of individuals over time and follows up with the study subjects in the future.]