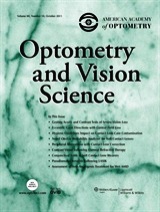 People who have central vision loss, caused primarily by age-related macular degeneration, can sometimes adapt by developing a new fixation point in a different part of the retina, called the preferred retinal location (PRL). Recently, Canadian vision scientists developed a new method that makes it possible to identify PRLs in both eyes simultaneously.

Optometry and Vision Science, the official publication of the American Academy of Optometry, publishes current developments in optometry, optics, and vision science, and promotes interdisciplinary exchange among optometrists and vision scientists worldwide.

About the Preferred Retinal Location Research

Central vision loss results from degeneration of the fovea – the central pit of the retina, where visual acuity is sharpest. The most common cause is age-related macular degeneration, which is also the leading cause of blindness in older adults. Especially when present in both eyes, loss of central (reading) vision is a major intrusion on quality of life and everyday functioning.

Taking advantage of visual plasticity that persists even in old age, the brain and eye can partly compensate for loss of the fovea by developing a preferred retinal location (PRL); that is, shifting fixation to another nearby spot in the retina. Patients learn to use an area of their peripheral vision to substitute for their lost central vision.

A technique called microperimetry with eye-tracking can precisely identify the preferred retinal location (PRL), but only in one eye at a time. This may not adequately represent binocular function – vision with both eyes working together. “Understanding binocular vision is important for designing optimal rehabilitation methods for patients with central vision loss,” [the authors] write.

They developed a method to establish the preferred retinal locations (PRLs) in both eyes, based on the relationship between microperimetry and eye-tracking measurements in healthy eyes. By enabling simultaneous identification of the PRLs in both eyes, the technique provides important information on binocular function in eyes with low central vision. At least for some patients, the results may help to guide approaches to maximizing binocular vision – for example, through relocation training to help move the PRL to the corresponding location in both eyes.

The eye-tracker method may be especially valuable for managing the large number of patients with age-related macular degeneration affecting both eyes. Such an approach not only allows a better understanding of how the eyes and brain deal with binocular central vision loss, but also opens up exploration of new approaches to visual rehabilitation for these individuals.

Damage to the macula impairs the central (or “detail”) vision that helps with essential everyday activities such as reading, preparing meals, watching television, playing card and board games, and needlework and sewing.

AMD is the leading cause of vision loss for people aged 60 and older in the United States. According to the American Academy of Ophthalmology, 10-15 million individuals have AMD; approximately 10% of people who are affected have the “wet” type of AMD. For more information about vision loss from AMD, see How Does AMD Affect Vision? by Lylas G. Mogk, M.D.

The dry (also called “atrophic”) type of AMD affects approximately 80-90% of individuals with AMD. Its cause is unknown, it tends to progress more slowly than the wet type, and there is not – as of yet – an approved treatment or cure. “Atrophy” refers to the degeneration of cells in a portion of the body; in this case, the cell degeneration occurs in the retina.

In dry age-related macular degeneration, small white or yellowish deposits, called drusen, form on the retina, in the macula, causing it to deteriorate or degenerate over time. These small yellow deposits beneath the retina are a buildup of waste materials, composed of cholesterol, protein, and fats. Typically, when drusen first form, they do not cause vision loss. However, they are a risk factor for progressing to vision loss.

More about the Research from Optometry and Vision Science

From the article Summary and Discussion:

The information about the locations of the preferred retinal locations (PRLs) simultaneously in the two eyes has been long sought after by researchers working in the field of low vision because the impairments in binocular vision of patients with central vision loss are not well understood.

Also, this information may be helpful in deciding the best course of action for the rehabilitation process for each patient. For example, in the case of the patient with very low vision, the monocular PRL of the left eye and that of the right eye are on opposite sides of each eye’s large central scotoma [i.e., blind spot] and therefore in non-corresponding positions. During binocular viewing, however, the PRL of the slightly worse eye moves to a corresponding position with the PRL of the better eye while falling on the scotoma.

Consequently, during binocular viewing, the patient is left with the visual input from only one eye. This patient would probably benefit from PRL relocation training to the upper part of the retina of the two eyes, provided that the trained location is within the same distance from the former fovea as the original PRL to maintain the same level of resolution. This position is beneficial for reading not only because it provides a larger visual span but also because the two PRLs will fall on functional retina.

This is a “proof-of-principle” study and some limitations must be acknowledged. The eye-tracker measures eye movements based on anatomical assumptions described elsewhere and individual factors, such as corneal shape and the roundness of the pupil, affect the accuracy of the measurements.

In addition, we have not tested this eye-tracker on patients with central vision loss and high myopia [i.e., nearsightedness] or hypermetropia [i.e., farsightedness]. For these patients, the eyeball is elongated/shortened and the offset between the eye-tracker and the microperimeter would probably be different from that reported in this article.