CSUN, the annual Assistive Technology Conference, took place this month in sunny San Diego, and again, I participated "virtually," listening to podcasts and reading tweets of the products featured in between shoveling out from a series of late winter storms in southern Maine! For readers unfamiliar, CSUN is often a conference where new products, updates, and ideas are first launched in the world of Assistive Technology (AT).

The continued enthusiasm for refreshable braille displays—both low-cost and tablet sized—got my attention. These are not new this year. CSUN attendees will be tantalized by the Orbit Reader 20’s promise of a 20 cell braille display for under $500 and frustrated by the fitful start and stop of production to iron out the kinks. If that is not tempting enough in itself, the Canute by Bristol Braille Technology, a nonprofit based in the U.K., is a nine line, 360 cell braille display, marketed as an e-reader, much like a Kindle.

Refreshable braille displays are certainly not new, the first, called BRAILLEX, was developed over 40 years ago, and the technology has changed little since that time. Small pins are pushed up and down mechanically to create the dots in a braille cell. Devices that have braille displays often have as few as 12 to 20 cells on the display. Larger displays of 80 cells are available, but for many, they are cost prohibitive. Typically, a braille cell of six or eight dots depicts one to two characters in a word. As a result, the reader reads several words on the display and refreshes the display to read the next set of words. Historically, both the technology and relatively small market have contributed to the high cost of refreshable braille displays.

The Canute has been in development since 2012, and this is not its first demonstration at CSUN. The difference this year is that this is the 13th prototype and the one that will shortly begin pilot testing with a group of users prior to an anticipated release later this year. A press release issued in January 2018 suggested the retail price may be around $700! 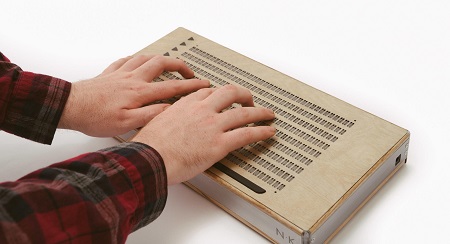 In brief, the Canute will render braille files (BRF) stored on an SD card in much the same way a sighted reader would open a digital book on a Kindle. Because the Canute will have nine lines of braille with 40 cells in each line, reading on the Canute will be much more like reading from a full page of braille.

By contrast, the Orbit Reader 20 has a smaller single line of 20 cell braille and offers some limited editing of braille files. Like the Canute, its primary function is to provide a low-cost, portable electronic braille reader.

What is most compelling about these braille displays and the other ongoing braille projects whose goal is low-cost electronic braille is how likely these devices will increase access to braille around the world. At its most basic level, braille can be created on any heavier stock paper using a slate and stylus that costs less than $15. It is the considerable cost of embossing multi-page documents on electronic braille embossers that cost thousands of dollars or the higher cost of recreating textbooks for students in braille on paper that has dramatically undermined braille in the digital age.

For many educators and agencies who work with individual with vision loss, the alternative to teaching and reading braille has been audiobooks and text-to-speech on phones, tablets, and computers. While these alternatives are wonderful tools for accessing print, research suggests that interacting with words, grammar, and spelling with braille and print result in a higher level of literacy than that attained solely through audio tools.

Ultimately, these braille displays may reduce the reliance on a braille embosser to produce paper braille and some braille textbooks. It is worth noting that, unlike the Orbit Reader, the Canute currently utilizes a six-dot braille cell which works well for literary braille but will prevent it from being a useful tool for the eight-dot braille (Nemeth code) commonly used in science, mathematics, or computing notation. Additionally, both products have placed a priority on off-the-shelf parts to keep costs low and, presumably, make repairs cheaper and easier.

It is products like the Canute and Orbit Reader 20 that are heralding in a new, market niche for reduced cost braille displays and a consensus among the low vision and blind community that this is a priority for moving braille literacy and braille technology forward.

With products like the Orbit Reader and the Canute working their way to the market, both educators and rehab professionals will have access to a greater variety of braille alternatives for readers who are blind or low vision. In a recent interview with ACB Radio Tek Tak Talk, Bill Boules, Blind Rehab Specialist, pointed out that many school-age students with low vision miss the opportunity to learn braille, which may be a more efficient way for them to read because of funding restraints, limited access to braille materials, or a lack of qualified teachers of students with visual impairments. The availability of textbooks and easy access to digital braille from a low-cost refreshable braille device may encourage the use of braille for those students who are able to see print but unable to use it as efficiently as they might use braille to read.

Low-cost braille is here, and the newer technology has a few bugs to sort out, but it is here to stay and will dramatically increase reader’s access to braille. Imagine for a moment, what might happen if the braille e-readers become as popular and available among braille readers as the Kindle?

Coming next, a glimpse of the Orbit Reader 20 by Sandra Burgess, who has taken part in the testing of the device.