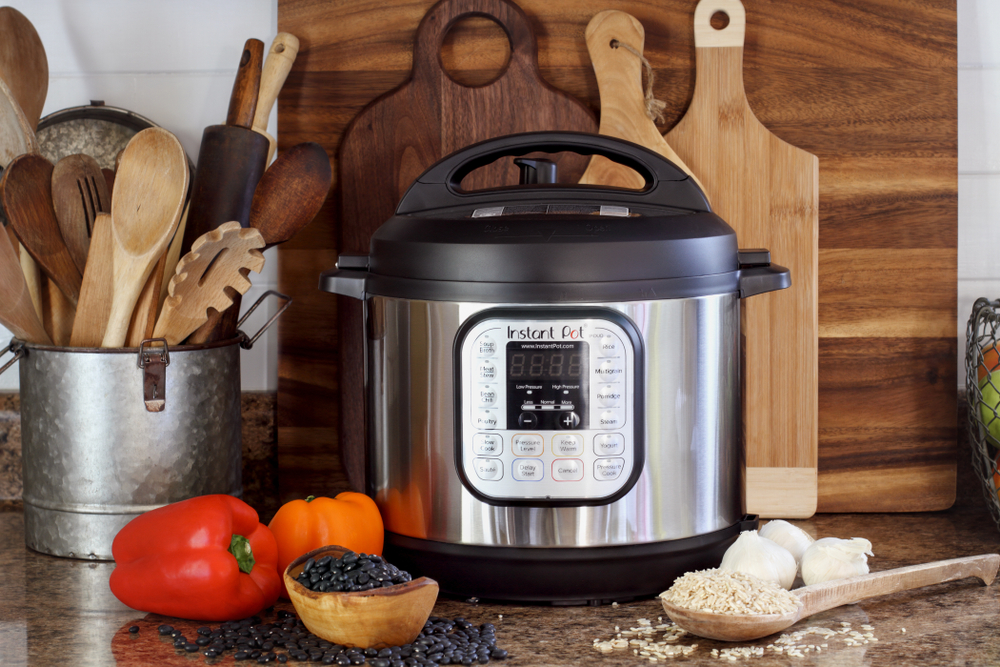 The Instant Pot, a Magnificent Obsession

This would make an excellent gift. The Instant Pot is one of the latest cooking crazes, and with good reason! Actually, it is just one of many brands of a small kitchen appliance called a multicooker, a single product that can perform the jobs of many. The main function that really has people talking is an old idea made new and improved, pressure cooking. The Instant Pot has ten built-in safety features so, for instance, your stew won’t end up on your ceiling! It consists of a base that houses the electronics, a liner that fits inside the base and holds whatever is being prepared, and the lid.

While there are at least 5 different models of Instant Pots, the Lux and Duo series seem to have the most blind/visually impaired-friendly controls. The Duo has a better design and more functions. The Duo can be used as a pressure cooker, slow cooker, rice cooker, steamer, yogurt maker, and to saute and keep food warm. During food preparation or serving, the lid can conveniently be placed in a side handle of the base. The Duo is available in 3 qt., 6 qt., and 8 qt. sizes. The push-button controls are both tactile and audible. The Ultra series has buttons and a dial that may not be so practical for people with little or no vision. The Smart Wifi series has buttons and can also be operated through a Wifi-enabled device. Unfortunately, I have not found the Instant Pot app to be very accessible. There are two raised lines on the inside of the Instant Pot liner. The top one, about two thirds full, is the maximum fill line. The other, about half full, is the fill line for foods that may expand or foam during cooking, such as rice, dry beans, grains, pasta, etc. Although the Instant Pot remembers your last used settings, if, like me, you want to independently program your cooker, pressing and holding in the “cancel” button on the Duo for about 10 seconds will emit a double beep that means your cooker has returned to the default settings. This operation is not quite as easy with the Lux series, and doesn’t seem to be consistent among the different sizes. The liner is deep, which helps when sautéing, as the splatter is less likely to reach you. This also makes cleanup easier!

A great advantage of the Instant Pot is the all-in-one preparation. You can sauté your meat and vegetables, add your spices and liquids, then uncooked pasta, rice or beans, for example, cover, let the food cook under pressure…all in one pot with little fuss. Boil and easily peel a dozen eggs, make a healthy breakfast of steel cut oats while you get ready to go, cook several boneless, skinless chicken breasts or thighs to use in meals throughout the week, make a pot of beans without presoaking, or make comfort foods such as spaghetti with meat sauce, beef stroganoff, cashew chicken, chicken noodle soup, macaroni and cheese, pork chili verde or meatloaf and mashed potatoes. The possibilities are endless, with recipes as easy or as complicated as you like.

Resources abound for learning to use your Instant Pot. There are numerous YouTube videos that are not only very descriptive, but also state all ingredients with exact amounts. There are several Instant Pot and pressure cooker cookbooks on BookShare, Audible, and Kindle. While most recipes have been written for 6 qt. models, there are books and YouTube videos specifically for the 3 qt. model (Instant Pot Mini). At least one book, The Instant Pot Bible, gives recipe variations for the 3 qt. and 8 qt. sizes. User manuals can be found on the web. If you decide to adapt your own recipes, remember that whatever you cook must have some thinner liquid to create steam which will bring the cooker to the needed pressure. If you use Facebook, several groups have been started for Instant Pot and pressure cooker users. Like many of us, you may be afraid to use your Instant Pot at first, feeling it is intimidating or overwhelming. After you unbox it–there are YouTube videos that will walk you through the process– the first thing you should do is perform the “water test”. There are videos for that too. It’s a great confidence builder and ensures that your Instant Pot is working as it should. If you’ve never heard it, you may be startled by the loud hissing sound that is made when the pressure is manually released, so the “water test” lets you know what to expect. Although there is a slight learning curve, before you know it, your Instant Pot will likely become an obsession. You’ll want to get another one, accessories, and you’ll want to keep trying new recipes. Instant Pots and accessories make great gifts. It would make an excellent Mother’s Day gift! They can be purchased through shopping websites, local discount, department, and homeware stores. Go to a local store, put your hands on them, and then shop around for the best bargain. The best bargain of all will be the enjoyment of making and eating a wide variety of foods from appetizers to desserts, independently prepared in your Instant Pot!