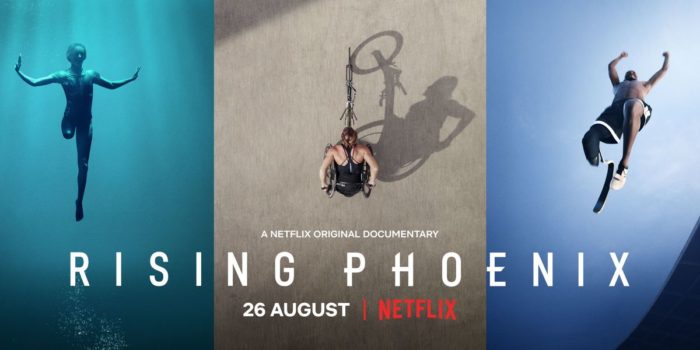 If you haven’t heard of Rising Phoenix yet, you will be hearing more about it in the coming days, weeks and months. In this Netflix documentary, “elite athletes and insiders reflect on the Paralympic Games and examine how they impact a global understanding of disability, diversity and excellence.”

But it’s not just a story of disability. Rising Phoenix tells the story of human experience. It shows how the Paralympics developed, and how they change perspectives, both of societies and also the athletes themselves. Interest in the Paralympics grows each year. I love watching the Paralympic events, but I didn’t know how it developed and progressed. I was always envious of the Paralympic athletes, as I know a few past and current athletes. I remember conversations with Donte’ Mickens and Walter Blackman who both played for the USA Goalball team for a number of years. They discussed their experiences with their travels, networking with other athletes, and interacting with the locals. Our friends, Mondi and Chris Azpetia, traveled to China to see some of the events and explore the country. They had been sold on the idea after watching coverage of Olympics, and booked a last minute trip to China. They shared stories of meeting the public and family members of athletes in their travels. They shared how the country embraced the games, and were pushing to be competitive. This really drove home the total impact of the Paralympics for me. I have interacted with professionals who work in the blindness community. They have found that there is more support for their programs due to the games, a greater acceptance and understanding of what is possible.

I had a great conversation with Greg Nugent, Producer, about the film and their work to create it. Greg shared that the film was really sparked from what happened in Rio, when the games almost didn’t happen. He knew something needed to be done to tell the story of the Paralympics, and it needed to be done with great production. He said, “If their was going to be a documentary about the Olympics, it would be done like a James Bond film.” He knew the same value needed to be presented with this story. The film doesn’t just show individuals who have disabilities in front of the camera. Around 20% of the people involved in the film are people who have disclosed having a disability. One of the Executive Producers, Tatiana McFadden, is a featured Paralympian, and one of the most accomplished athletes. She successfully competed in both summer and winter events, as well as being the top distance competitor for many years. During a question and answer event, the other producers explained the detail and commentary that Tatianna brought to the production, because she was their equal. Parts of the music throughout the film were performed by accomplished musicians who happen to have disabilities. The explosive title track for the film was created and performed by hip hop artists who have disabilities. The song will get stuck in your head, and keep you going back for more.

Watch the trailer below, and watch the film when it’s releases worldwide on Netflix August 26th. This film is a must see. Thank you for sharing the stories from around the world on these spectacular athletes.

Watch the trailer below: