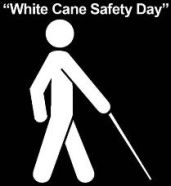 White Cane Safety Day is an international observance that is celebrated on October 15 of each year since 1964. Its purpose is to (a) celebrate the achievements of people who are blind or visually impaired and (b) acknowledge and pay tribute to the long white cane, a critically important mobility tool and potent symbol of independence.

Here is more information about the history of White Cane Safety Day from the National Federation of the Blind:

This resolution said: “Resolved by the Senate and House of Representatives, that the President is hereby authorized to issue annually a proclamation designating October 15 as White Cane Safety Day and calling upon the people of the United States to observe such a day with appropriate ceremonies and activities.”

Within hours of the passage of the congressional joint resolution authorizing the President to proclaim October 15 as White Cane Safety Day, then-President Lyndon B. Johnson recognized the importance of the white cane as a staff of independence for blind people.

A History of Orientation and Mobility

The profession of Orientation and Mobility began to develop during, and immediately after, World War II.

In order to better serve the large number of blind soldiers who required special training and services, the military recruited Richard E. Hoover, an army sergeant, who was assigned to the center for the treatment of blinded soldiers at Valley Forge Army Hospital in 1944.

During the same year, Russell Williams, who was blinded by enemy action in France, received medical rehabilitation at the Valley Forge Army Hospital, and in 1947, C. Warren Bledsoe joined the Hospital. These three men made significant contributions to the development of a new profession: Orientation and Mobility.

The war-blinded soldiers were highly motivated to be successful, and Richard Hoover believed that the traditional strategies taught and used to travel independently were inadequate. In response, he developed a technique for using a cane that was lightweight and longer than a support cane. This technique and cane revolutionized independent travel for blind people and remain in use today.

You can learn more about the history and development of the profession of Orientation and Mobility at the VisionAware website.

Does the Cane Have to Be White to Be Effective? An Answer from Dona Sauerburger, COMS 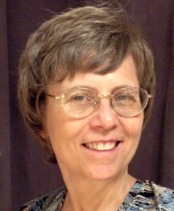 Dona is a Certified Orientation and Mobility Specialist (COMS) who provides itinerant orientation and mobility services to blind and visually impaired adults and teenagers.

She is the author of An Introduction to Orientation and Mobility Skills on the VisionAware website and Independence without Sight or Sound: Suggestions for Practitioners Working with Deaf-Blind Adults, which received the C. Warren Bledsoe Publication Award.

When used properly, a cane can provide information and protection, regardless of its color – it does not have to be white to be effective. Most canes used by blind people are white, but they are also available in red, black, yellow, and blue. For example, these canes (pictured below) from AmbuTech are available in a range of colors.

However, only a white cane identifies the user as a person who is blind or has low vision. This can be an important consideration when crossing streets and requesting information from store clerks, bus drivers, and the general public.

It’s likely that people will be more willing to help if they realize you’re asking for information because you are blind or have low vision. 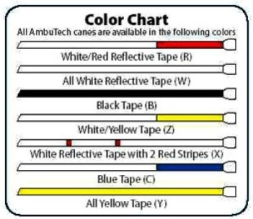 Many people are under the impression that each state’s White Cane Law contains a provision that requires drivers to stop for, and/or yield to, pedestrians who are carrying white canes. This is not correct. The laws in each state vary widely and drivers do not always reliably stop for pedestrians who carry white canes.

When drivers see pedestrians who are carrying white canes:

Check your state’s White Cane Law to determine the language that describes driver and pedestrian rights and responsibilities.

For more information about the history of White Cane Laws in the United States, you can read the Pedestrian Safety Handbook at the American Council of the Blind website.