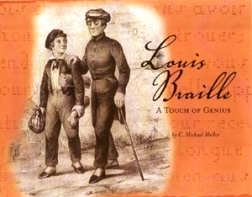 During Braille Literacy Awareness Month, VisionAware is pleased to celebrate the life and work of Louis Braille (January 4, 1809 – January 6, 1852), the creator of the braille code, which revolutionized reading and writing for blind people throughout the world.

This month, our examination of Louis Braille’s life and work features Louis Braille: A Touch of Genius, authored by C. Michael Mellor and published by National Braille Press. The mission of National Braille Press is to promote the literacy of blind children through braille and to provide access to information that empowers blind people to actively engage in work, family, and community affairs.

About Louis Braille: A Touch of Genius

Excerpted from the jacket copy:

In the early weeks of 1809, Abraham Lincoln, Charles Darwin, and Louis Braille were born. These three remarkable men would lend their brilliance to a century of great change and innovation, but only one escaped fame in his lifetime. 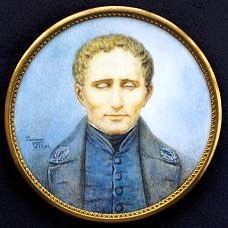 Louis Braille was born sighted, and accidentally blinded himself at the age of three. He was fortunate to be sent to Paris to board at one of the world’s first schools for blind children.

There, at the age of 12, he began to work tirelessly on a revolutionary system of reading and writing by touch. Braille’s passion to improve life for “my fellows in misfortune” was the driving force behind his creation of a code of raised dots that gave blind people the gift of literacy for the first time, whether they speak French, Chinese, or Urdu.

Drawing on primary sources that sort fact from fiction, Louis Braille: A Touch of Genius is the first full-color biography to include 31 never-before-translated letters, some written by Braille’s own hand. An extraordinary collection of documents, photographs, and artistic works enhances the bibliographic narrative of the phases of Braille’s life – as a child and student, talented musician, beloved teacher, astute businessman, and genius inventor.

The following passage, entitled Home, describes Louis Braille’s childhood in Coupvray, France and is excerpted, with permission, from Louis Braille: A Touch of Genius, pages 13-16:

In the first few weeks of 1809, three baby boys were born who changed the course of history: Abraham Lincoln, sixteenth President of the United States; Charles Darwin, British father of the theory of evolution; and Louis Braille, the French inventor of a means of literacy for blind people worldwide. Unlike Lincoln and Darwin, Braille’s genius is little known outside his native land, except among those who have been touched by his gift of literacy.

Louis Braille was born in the little town of Coupvray, 25 miles east of Paris, on January 4, 1809. He was the last child of Simon-René Braille and his wife of 17 years, Monique (née Baron). They already had three children: Monique-Catherine-Joséphine, born 1793; Louis-Simon, born 1795; and Marie-Céline, born 1797. Louis was the youngest by twelve years.

Louis was a small, listless baby, too sickly even to suck milk from his mother’s breast. He was registered with the town authorities the next day and baptized three days later for fear he might die. Disease struck hard in early 19th-century France, and infant mortality was high, even for the wealthy.

Still, under the devoted care of his mother and family, Louis grew more robust. Mother and father were thrilled with their new baby, who came along, perhaps unexpectedly, when Simon-René was 44 and Monique 39. Simon-René proudly announced that Louis would be his “companion in old age.” The doting parents called him their little “Benjamin”—a reference to the beloved son of the biblical Jacob—and he became their favorite.

Simon-René supported his family as a harness maker (bourrelier), a trade first practiced by his own father some sixty years earlier. In an agrarian society, a bourrelier was a man of some stature, well known to the farming community and frequently visited by neighboring farmers over the course of a year. He made the leather tack – collars, straps, bridles – that allowed a farmer to tap and control the strength of a horse, the chief source of power on a farm and one of the few means of transport until well into the 19th century.

Simon-René was adept at his trade, earning the title of master harness maker before he was 27. “It was a point of honor with the master to deliver only work well done, to strive for perfection in the whole and in every detail.” Young Louis was to draw on these traits—attention to detail and a desire for perfection—to invent a means of literacy for people around the world.

Life for Monique Braille, a wife and mother in rural France at the turn of the 19th century, was arduous. Lacking today’s labor-saving amenities, Monique spent most of her waking hours taking care of the children, preparing food, cleaning, sewing, spinning, washing and mending clothes, and helping on the farm. There were chickens and a cow to attend to, and in the fall, she and the children helped to make hay as winter fodder.

Monique and Simon-René always encouraged young Louis to join in the work. Over the years, the industrious and frugal Braille family acquired an additional seven and a half acres of land, and managed their own two and a half acre vineyard, which yielded a year’s supply of wine, stored in huge casks in the cellar.

“Lavoir des Médisances” (the Gossips’ Wash House) in Coupvray, dating
from the Middle Ages, was also an important communications center.

Calamity in the Workshop

How young Louis Braille injured his eye in his father’s workshop one summer day in 1812 is not clear. The most reliable account comes from Hippolyte Coltat, a former schoolmate and close friend of Louis’s:

One day, at the age of three, sitting beside his father, who was working and lovingly thinking about his little “Benjamin” [i.e., Louis], the boy wanted to work too, and imitate the movements he saw his father make. In one of his little hands he seized a leather strap, and in the other a serpette (a slender, curved knife, rather like a small pruning hook) and there he was at work. Weakness often invites trouble; and it did: The sharp tool veered out of control at an angle and stabbed the poor worker in the eye.

Medical knowledge at that time could not save the eyesight of their “Benjamin.” Lily water, thought to possess healing powers, was applied by an old woman from the village, probably doing more harm than good to the injured right eye. Louis’s other (left) eye became inflamed, and the sight in that eye was eventually lost, too.

The right cornea became totally opaque, and the left eye partially so, with blue “striations.” His eyes would have been very painful during this period; he would have cried a lot and needed much mothering. It is not known how long the process continued, but by age five, two years after the accident, Louis was completely blind.

“The Accident,” a drawing by André Harfort, depicts
an inquisitive and energetic three-year-old boy climbing
to reach one of his father’s sharp leather-working tools.

Even with today’s medical advances, it is unlikely that Louis’s wounded eye could have been saved, but the healthy (left) eye might have been treated with corticosteroids and immunosuppressive drugs. The development of pathology in a healthy eye after the other eye has been injured was noticed as long ago as AD 1000, though no term existed for this phenomenon until 1830, when William Mackenzie, a foremost Scottish ophthalmologist of his time, devised the term “sympathetic ophthalmia.”

This is now thought to be an auto-immune disease in which the mechanism the body uses to repair damage goes awry and attacks healthy tissues. The seemingly drastic measure of surgically removing Louis Braille’s injured eye within two weeks of injury might have prevented the development of blinding inflammation in his healthy eye. 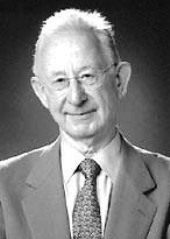 C. Michael Mellor embarked on a biography of Louis Braille when he first saw the letters of Louis Braille on display at l’Institut National de Jeunes Aveugles, the school in Paris where Louis was a student, teacher, and creator of an embossed code that carries his name.

As editor of the Matilda Ziegler Magazine for the Blind for eighteen years, Mike has long held a fascination for braille. His published paper, “Making a Point: The Crusade for a Universal Embossed Code in the United States,” was delivered at the International Conference on “The Blind in History and the History of the Blind,” in Paris, France, where he came upon Louis’s extant letters and decided to translate them for publication. He holds an M.A. in the History of Science from the University of Leeds in England, where he was born.

You can listen to a National Public radio interview with C. Michael Mellor at the National Braille Press website.

How to Buy the Book

Louis Braille: A Touch of Genius is available for purchase at the National Braille Press website, in the following formats: (a) braille, (b) ebraille (CD-ROM), (c) ebraille (download), and (d) print. For a limited time, the price of the braille or print edition is $20.00 (regularly $35.00).