March is National Reading Month and what a great reason to take a look at one of the true standard devices for accessible reading, the Victor Reader Stream. Humanware’s Victor Reader product line has been around for some time and has truly mastered the art of providing accessible book reading.

The latest in their line of Streams has added GPS and changed the name to reflect it, the new reader with GPS is called the Victor ReaderTrek.

Humanware is certainly not a newcomer to GPS. Most recently, Humanware’s Trekker Breeze was a relatively easy-to-use, standalone GPS, slightly larger than a flip phone. Prior to that, the Trekker, a full-featured standalone GPS. Both devices were very popular. For readers familiar with the Trekker Breeze, just imagine having that great GPS built right into a Victor Reader Stream, without a noticeable increase in the size of the Stream. You have the Victor Reader Trek!

Oh yes, our focus was going to be on reading, right? The GPS is going to have to wait! First of all, before the fans of the Stream get concerned, Humanware reported that the last version of the Stream, called the Victor Reader Stream (New Generation), will continue to be sold separately for those who have no interest in adding GPS to their reading device. This is good news for those who are budget minded because adding GPS to the Stream adds about $280. The New Generation retails for $369, and the Trek is $649 retail.

If you have used either of the Streams that predate this one, you will be delighted when you explore the tactile buttons on the front face of the device—nothing has changed! In the world of tech, that can sometimes be a glorious thing! The Trek has lost a line in port used for an external microphone on the right side and gained Bluetooth, a very welcome feature! Hopefully, the microphone you might have plugged into the Trek will connect via Bluetooth. If you held the New Generation back to back with the Trek, you’d find that the addition of GPS has made the Trek slightly larger in surface and width. The Trek is 4.5 inches by 2.4 inches and less than an inch thick.

The Trek retains all of the reading features on previous models. Users can download DAISY (Digital Accessible Information System, a form of talking book that is mostly used by people with low vision, blindness, and other print disabilities, such as dyslexia) formatted books with the built-in Wi-Fi, first introduced in the New Generation, or transfer files from a computer via USB cable or SD card. Subscribers to NLS Talking Books, Bookshare, Learning Ally, or NFB Newsline for newspapers can simply enter their username and password credentials to download books and magazines. Like previous versions, the Trek has text-to-speech built in so that books formatted in DAISY text can be read using the user’s choice of voices. In addition, a limited number of other text files such as those formatted as .txt, rtf, or html can be read using the Trek.

Other Features of Victor Streams 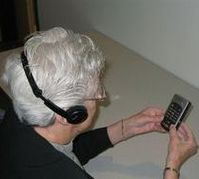 The Victor Reader Stream models (small, portable player that can play a variety of formats of books and music and also includes a voice recorder, internal speaker, clock, and variable sleep timer) have been popular for a variety of reasons, including their portability, very tactile, high-contrast menu buttons, number pad, and overall versatility. Even before the addition of GPS, it would have been a mistake to think of these devices as just a book reader. The Trek plays a wide variety of audio files, including mp3, mp4, wav, and nearly any other standard that can be imagined. Wi-Fi added the ability to connect to Internet radio stations, where content is streamed directly to the device through the Internet. This also allows users to access services like Audible.com books. A single button on the right side, below the headphone, allows users to add audio notes, which are recorded as mp3 files.

Why Spend the Money on a Victor Stream Trek?

In these days of smartphones and tablets, there are consumers who are going to ask, "Why would I spend the extra money when my (fill in the blank) can do all of that with an app?"

Let Me Count the Ways

The easy part of this answer is that the Trek and Streams before it have a much longer battery life when charged. Plenty of Stream owners have been huge fans because they can listen to music, podcasts, and audiobooks without draining the batteries on their smartphones. When they need the phone for a phone call, it still has charge left!

Think about some of the smartphone apps that do what the Trek does: BARD for NLS; NFB Newsline for newspapers; Voice Dream Reader for Bookshare; iTunes for podcasts and music; Voice Record for digital voice recorded; a web browser for Internet radio; and that doesn’t even include the GPS apps! These are all great apps and certainly worth learning to use as a smartphone user, and each one is completely different. To get the functionality from all these apps, you have to learn each one. The Trek, like its predecessors, integrates all of these functions into one menu that is used across all the different media.

For example, on the Trek, pressing the number "1" puts users in the "Bookshelf," and continuing to press "1", cycles through the folders that hold media: Audiobooks, Music, Podcasts, Text Files, etc. Using the "Previous" (number "4") or "Next" (number "6") buttons move between the files in a folder. Once the file is located, the "Play/Pause" button starts playback. This basic menu system works for all media, even the folder containing the user’s audio notes.

Why pack another device if you’re a smartphone user? The Trek has a longer battery life and is intuitive and predictable to use and requires no gestures! Couple all the reading features with a tested pedestrian GPS that happens to use the same menu, and you can see how the Trek, even in the age of smartphones, is prepared to carve out a niche.

To engage the GPS, Humanware added another function to the "Online Features" button, positioned at the top of the number pad above the number "2." On the New Generation, this button toggled between the online Bookshelf and the one stored on the SD card. Continuing to press that button will switch the Trek into the Orientation mode of GPS. While a number of the menu functions do change in GPS mode, enough are similar to keep the learning curve minimal.

For example, to get started, bring up the "Key Describer" mode, which is the "0" key, as it was on the reader menu. The numbers "4" and "6" remain the "Previous" and "Next" buttons. The number "1" is no longer the "Bookshelf," but takes users into a detailed user guide for the GPS. As on the reader, the "5" button is the, "Where am I" key. On the reader, this would report descriptive information about the book, document, or podcast being listened to. On the GPS, this key gives a quick report on location, direction being traveled, and the next intersection coming up. While walking with the Trek, I found myself pressing the "Where am I?" key periodically to check progress and confirm the next intersection. Pressing and holding that key will bring up a list of landmarks within the immediate vicinity and directions to that location quickly retrieved.

Significant GPS Feature—Designed for the Pedestrian

There are a great many GPS features, and one of the most significant overall is that the GPS for both the Trekker Breeze and now the Trek appears to be designed, first and foremost, for the pedestrian. For example, the GPS automatically determines from the speed the user is traveling if it is by foot or car, and makes some changes in the amount of information provided. Also, users hear more detailed information about upcoming intersections than might be provided on a GPS app for a smartphone that was designed first for car travel with pedestrian travel as an afterthought.

The Scoop on Address Input

The one area I thought the smartphone GPS may have an advantage over the Trek was on address input. I’ve become spoiled putting address information in verbally and having the GPS calculate a route. On the Trek, specific addresses are keyed in using the numerical keys, like the dialing keys on a push button phone, where each corresponded to a group of letters, and the key often had to be pressed multiple times for a letter or character. Fortunately, after a couple letters, users may then select from options offered by the onboard database. For example, typing in the state of Massachusetts would only require typing in the first letter or two and selecting from the few states starting with the letter "M."

The Victor Reader Trek adds state-of-the-art pedestrian GPS to a reading platform that is very versatile and user-friendly. The Victor Reader Trek, or New Generation, is a great device for an individual to try who is not a tablet or smartphone user. The tactile buttons and intuitive menus offer a smart alternative to the gestures used on other devices. For those with other reading devices, adding the Stream or Trek to your pocket or travel bag may offer more reading options and leave enough charge in your phone to use it to make a call when you need to!

What’s New in Assistive Technology (AT) by Jamie Pauls