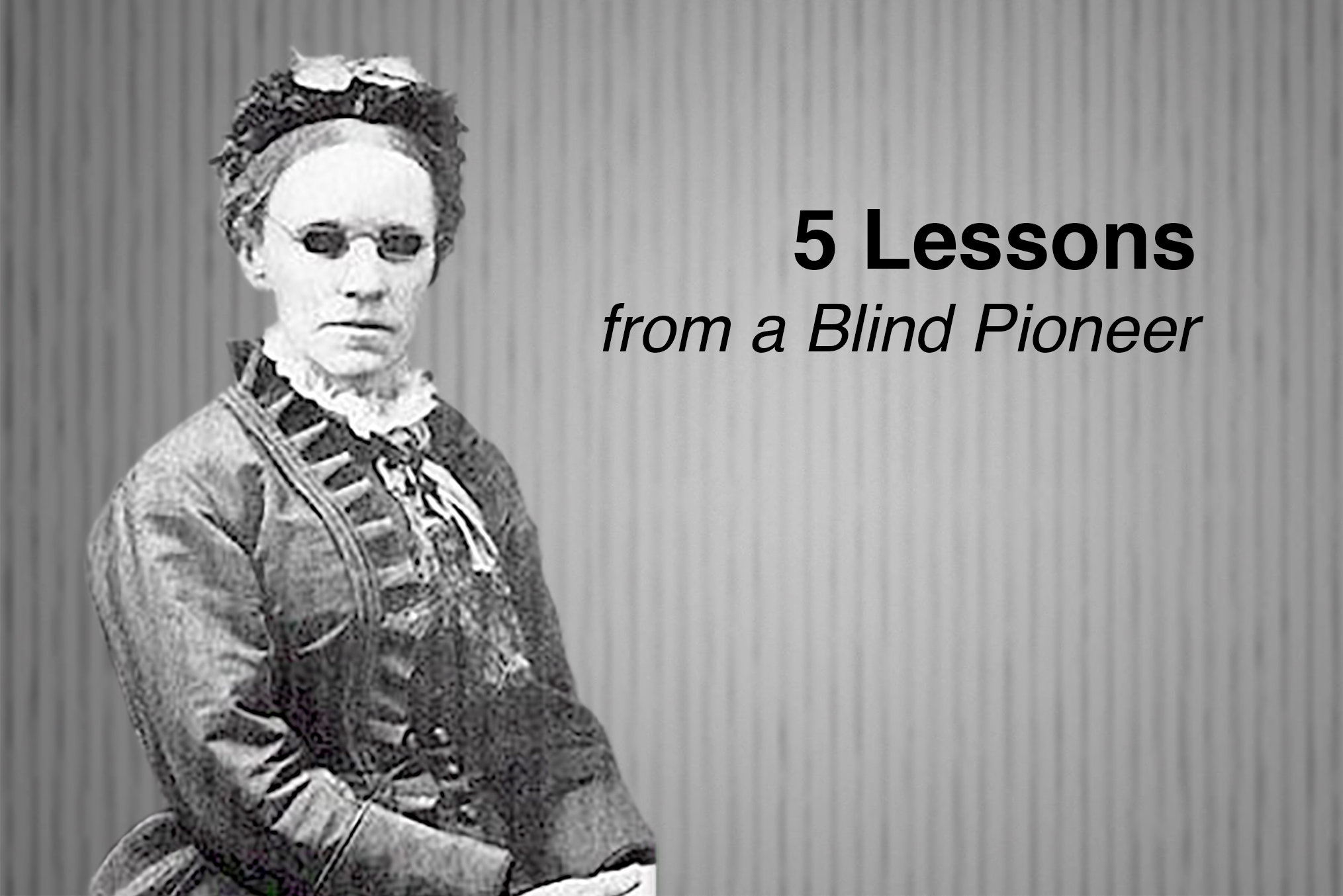 While you are probably familiar with Helen Keller and some of her achievements, do you know about Fanny Crosby?

Fanny, whose formal name was Frances Jane van Alstyne (nee Crosby), preceded Helen Keller by about 60 years, living between 1820 and 1915. Like Helen, Fanny was well-known during her lifetime. Similarly, she left a lasting legacy worth remembering. Both women were blind pioneers with much to teach us.

By looking back, we can gain inspiration and insights from Fanny, who proved to be a powerful and positive role model. In retrospect, we can see five aspects that contributed to her success. They are: the power of attitude; the power of faith; the power of education; the power of missions and advocacy, and the power of legacy.

The Power of Attitude

Fanny is best known as America’s most prolific hymn writer, having composed over 8,000 hymns! She also established herself as a poet, mission worker, teacher, and lyricist. One of her first recorded poems, composed at age 8, shows her determination to keep a positive attitude despite the vision loss she suffered as an infant.

“Oh, what a happy soul I am, Although I cannot see! I am resolved that in this world Contented I will be.”

Fanny’s father died early in her life, forcing her mother to work as a maid in order to provide for them.

Fanny’s grandmother, who raised her, was a major influence in her life. Her grandmother encouraged her to work to the best of her abilities and not to view herself as limited. Fanny carried that resourceful attitude throughout her 94 years of living.

As was common practice in her time, Fanny’s grandmother taught from the Bible. The child demonstrated a remarkable memory and was said to have memorized five chapters of Scripture per week. She could recite the gospels, as well as many of the psalms and proverbs, chapter and verse. Obviously, the practice not only strengthened her mind and attitude, but also her faith.

The Power of Faith

The Christian faith was central to Fanny’s life and work. She poured out her heart writing hymns, many of which are still sung today, nearly 200 years after her birth. Songs such as “Blessed Assurance” and “To God be the Glory” are treasured classics in many denominations.

As a Christian, Fanny understood the importance of looking forward. When a preacher once remarked that it was a pity Fanny could not see because she had been given so many other gifts, Fanny responded:

“Do you know that if at birth I had been able to make one petition, it would have been that I was born blind? Because when I get to heaven, the first face that shall ever gladden my sight will be that of my Savior.”

What an outlook! By seeing the larger view of life, Fanny did not become bogged down by her physical challenges. She lived with purpose, anticipating what was to come.

In time, a formal education would be added to the foundation laid by Fanny’s grandmother. Fanny made a life-changing move at age 14.

The Power of Education

Fanny spent 35 years at the school, first as a student and then as a teacher. She often entertained guests with her poetry and songs. Fanny, who played several instruments, represented the school as she traveled around the country performing and raising awareness of education for the blind.

Fanny’s role at the school gave her the chance to make important connections. United States President Grover Cleveland taught at the school before his political career. He and Fanny became friends, and Fanny proved to be very patriotic. She composed songs in support of the Union cause during the Civil War. Even schoolchildren knew Fanny’s name, because they sang her songs during the national conflict.

Fanny’s influence spread far and wide. Closer to home, she reached out to those in poverty in the nearby Bowery district of New York City.

The Power of Missions and Advocacy

The slum conditions of New York City in Fanny’s lifetime were abysmal. Fanny herself lived in a poor area of town, and although she was a well-known songwriter and speaker, she chose to dedicate her later years to helping the poor.

Her passion became one of assisting immigrants by donating the proceeds from her writing and speaking to ministry organizations in New York City. She and her husband, Alexander van Alstyne, Jr., organized concerts and created new music and poetry to mark special occasions.

The Power of Legacy

Fanny’s earliest poem was a mere inkling of the extensive writing to come. She left behind thousands of poems and songs, which impacted countless lives. Fanny lived long and lived well. One biographer, Bernard Ruffin, had this to say about Fanny’s positive attitude:

“Fanny’s lifetime had spanned many changes in America. She had seen the invention of the telephone as well as the telegraph, steam engine, phonograph, motion picture, bicycle, typewriter, x-ray, elevator, sewing machine, anesthetics, mower, submarine, automobile, airplane and radio. She did not belong to that class of people who looking back over the years think the old days were better than our own. She watched with wonder and great interest the developments of a lifetime and had no great criticism for modern inventions.”

And while watching life all around her, Fanny contributed her own special talents. She furthered the cause of blind education, championed her faith, advocated for the poor, and paved the way for many of us today.